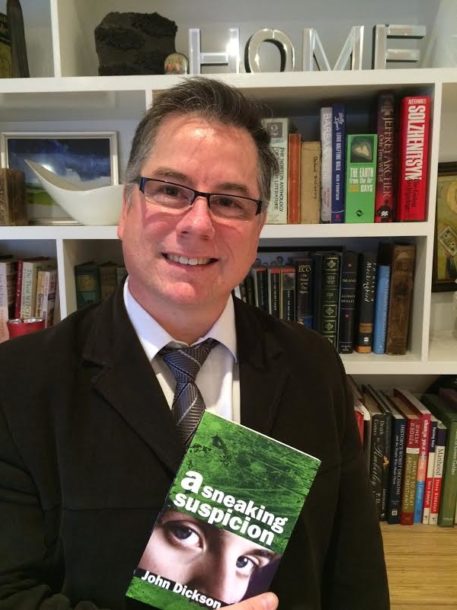 As reported yesterday by Kaley Payne at Bible Society, three books by Christian authors have been banned from the SRE (Special Religious Education) primary and high school curriculum in New South Wales.

The books are You: An Introduction by Michael Jensen, A Sneaking Suspicion by John Dickson and Teen Sex by the Book by Patricia Weerakoon.

This afternoon I caught up with one of those authors, John Dickson.

AB: Hi John. Thanks so much for making yourself available today to answer my questions.

I remember reading your book A Sneaking Suspicion when I was starting to think seriously about the Christian faith and I’ve got to say, I found it incredibly helpful. But yesterday it seems that there was a decision made high up in the New South Wales Education Department which basically bans A Sneaking Suspicion from being used by Scripture teachers in public schools.

Is that right? What’s going on here?

JD: Special Religious Education (SRE) is an optional class once a week, where parents can send their kids to learn about Christianity or Judaism or whatever. It’s been going on in schools for decades. My book A Sneaking Suspicion has been used for years with teenagers in this context. Yesterday, I was told by one of the major SRE providers, Anglican Youth Works, that my little book has been immediately suspended by the New South Wales Department of Education, despite it being approved by the Archbishop of Sydney for use in SRE. Weirdly, no reason is given, other than that content of the book “does not comply with departmental policy.” So we are guessing a little bit as to why. Do they not like the bit where I say that Jesus died for our sins? Or is it the claim that Jesus rose again? Or, perhaps more plausibly, is it that I offer a gentle case for enjoying sex only in the context of a life long marriage commitment?

AB: Did you see this one coming?

JD: I certainly didn’t. I didn’t know whether to be excited that the ‘ban’ will lead to further sales, bemused by the Department’s kneejerk reaction to the anti-religious lobby group behind it all, or annoyed that my little book might have a dark cloud hanging over it. Mostly, I feel the Department will have a further think and reverse the decision. I’m an optimist.

AB: What is the message of your book that you think Aussie teenagers need to hear?

JD: Jesus. The book is really all about him, even though the chapters are driving topically, Sex, Beauty Myth, Science v God, Pluralism, and so on. In every chapter I try to tackle the questions teens are asking and show why Jesus is relevant for our flourishing. His forgiveness and love is the basis for living confidently in the world, despite all the challenges young adults face.

AB: Your experience of religious education at school is a big part of your story. Do you have any thoughts about the place of SRE in the education landscape of our schools, and how should we approach it as Christians?

JD: Yes, I certainly became a Christian through SRE when I was 16. I grew up in a home that was loving but which gave me no opportunity to make up my own mind about Christianity. We never prayed, never went to church or anything like that. SRE was staffed by very faithful gentle volunteers from the local churches. Their knowledge of the Bible—both its content and its spirit—was very impressive. My Year 9 SRE teacher was an extraordinary middle aged mum, with a powerful intellect, great humour, and full of love. I don’t recall her ever urging me to become a Christian but I do remember she painted such an image of God’s grace in Jesus, that I found myself first a ‘fan’ of Christ and eventually a follower.

Personally, I think SRE should not engage in proselytising. I don’t think that’s what the parents want for their kids. I reckon they want their children to have a fun, sympathetic insider’s account of the meaning of the Christian Faith so that the kids will grow up to know enough to make up their own mind about Christianity and to know how much of an impact Jesus Christ, and the Bible generally, has had on Western culture. So, I believe SRE teachers should be as clear about Christ as they can, following the set curriculum, but they need to be good ‘guests’ in this privileged invitation to share the biblical narrative in state schools.

AB: And what about our society generally. What does this decision say about the way we as Christians should be taking the gospel to our fellow Australians.

JD: Like I said, I will be very surprised if the Department doesn’t change its mind. I think this was an overreaction based on the claims of a pretty unfair lobby group. And even if the decision stands, I’m of the view that Christians don’t really have special rights in the world. We should take up whatever opportunities come along but if we’re banned or kicked out, we should just recover the ancient Christian art of ‘losing well’. Sometimes gracious losses are the path to new opportunities to convey the crucified and risen Lord.