Two Melbourne Churches were vandalised on the weekend, with threats of violence smeared on their walls. Meaning to condemn Churches, they in fact complemented

Does history repeat itself? With a few drops of irony and a bucket full of ignorance, it appears that some Australians are trying their best.

In the early hours of Sunday morning, two Melbourne Churches were vandalised by a person(s).

Waverley Baptist’s building was graffitied with the words,

“Bash Bigots”, and with a picture equating Christianity with Nazism. 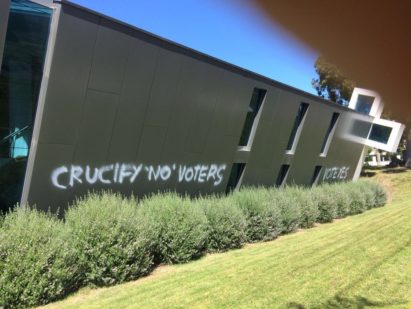 In light of the graffiti on these Melbourne Churches, it’s hard not to think of the most famous crucifixion of all.

On the night before his trial and crucifixion, Jesus and his disciples were praying in the Garden of Gethsemane when armed officials approached and arrested him. Peter responded by attacking a man with his sword. Jesus was quick to stop Peter, rebuked him for his wrongful action, and healed the injured man.

In contrast, throughout the trial before Pilate, the crowd repeatedly shouted out,

“Crucify him!” they shouted.

“Why? What crime has he committed?” asked Pilate.

But they shouted all the louder, “Crucify him!”

To be sure, there will be many ‘yes’ voters who are appalled by this latest vandalism on Australian Church buildings. But are we surprised? Of course not. When national political leaders and social commentators insist that voting ‘no’ equates to the worst kind of hate and phobia, it is no wonder that we are seeing this kind of behaviour being played out.

It is important to recognise that there have been some awful things said about gay and lesbian Australians; these are rightly reported and are widely condemned across the board. Any comment or insult that aims to dehumanise any Australian is reprehensible.

I can imagine people feeling unnerved when they arrived for Church yesterday morning; it’s not a pleasant welcome. Let’s not downplay the vileness of this threat: the practice of crucifixion was the most creative and cruelest form of execution, and it is still horrifically practiced in parts of the world today, including Iraq, Syria and Sudan, where Christians have been crucified. At the same time, the vandals are paradoxically offering the greatest complement anyone can give, for they are suggesting that these Churches be treated in the same manner as Jesus Christ.

“Whoever wants to be my disciple must deny themselves and take up their cross and follow me.” (Mark 8:34)

“Consider it pure joy, my brothers and sisters, whenever you face trials of many kinds” (James 1:2)

Of course, Christians can be insulted because we’ve done and said stupid things, and even sinful things. In the midst of the current national debate on marriage, I’ve heard some pretty nasty things spoken by Christians, rarely, but it has happened. However holding to the Bible’s understanding of marriage is not repugnant; it’s unpopular right now but it’s not hateful or wrong. Believing in heterosexual only marriage is not only in sync with the Bible, it’s stating the current legal view of marriage and it is also most logical understanding of marriage.

When Christians are smeared with the kind of hate and threats that were publicised on those Church walls, we should not respond with fear but with joy, for we are being insulted because of Christ.

“Blessed are you when people insult you, persecute you and falsely say all kinds of evil against you because of me. Rejoice and be glad, because great is your reward in heaven, for in the same way they persecuted the prophets who were before you.” (Matthew 5:11-12)

In the off chance that those responsible for Sunday’s vandalism read this blog post, understand that your words are a massive misfire. At the end of the day, you haven’t condemned these churches, you’ve commended them for following Jesus.

I also want you to know this, the very idea that you see as reprehensible may well be something good, and more wonderful than you realise. Just as we know that while humanity’s intent in crucifying Jesus was hateful, God used the cross for love. Jesus willingly went to his crucifixion out of love for the very people who despised him and called for his death. On the cross Jesus cried out,

“Father, forgive them, for they do not know what they are doing.”

This is how Drew Mellor, Senior Minister of Glen Waverley Anglican Church, responded, and that’s how we Christians need to keep responding. We can’t hold onto grudges or respond vindictively because we know how much we have been loved and forgiven by God. My own church has been graffitied over the years; it’s annoying, and I understand that it can also be hurtful. But then we remember how we once stood on the other side of the cross and tried to define reality without God.

It is because of Divine grace and love that Christians speak, and we want to persuade our fellow Australians about Jesus Christ, and yes, even about the goodness of marriage, and why it makes sense for marriage to remain between a man and a woman. Should the population and politicians decide otherwise, they can. Should the law change, it will redefine how we view society and how we treat those who cannot support those changes. While the graffiti is probably (un)intentional hyperbole, Australian Christians need to wake up to the fact that the culture has moved. The Bible has always taught that there is a cost for those who follow Christ. Through a combination of grace and complacency, most of us have we’ve avoided paying. We are just beginning to sense that things are changing, and that the historical bubble in which we’ve been living is about to burst, and we will find ourselves where Christians for most of history have lived, on the outside of society.

“ Live such good lives among the pagans that, though they accuse you of doing wrong, they may see your good deeds and glorify God on the day he visits us.” (1 Peter 2:12)

1 Vaccine Wars and the Church of God

3 Five Tips To Help You Through An Extended Lockdown

4 ‘Two Christians Getting Married’ or ‘Christian Marriage’. What’s the Difference and does it Matter?

5 The Bible and Slavery

Matthew Barrett’s Simply Trinity is an ambitious attempt to correct evangelical misunderstandings of the Trinity; to explain the doctrine in a clear and engaging way; and stomp on the idea...

Review: Made For Friendship by Drew Hunter

The Olympic Games: Good but Not God