So goes the proposal at the climax of a film which skilfully presents a world in which the practice of marriage (and the whole business of getting married) seems so compromised that true and lasting love are best found by avoiding the institution altogether. Similar sentiments seem to be at play—ironically!—in the recent declaration by a Canberra couple that if government legislation proceeds with amending to permit gay marriagethey would in turn get “divorced” (not in the sense of terminating their relationship but by moving it outside the sphere of formal recognition by the state). I don’t agree with their view, but I have some sympathy with it.

The current debates about how Christians and churches ought to respond to the possibility of legislation for same sex marriage (and, in an increasing number of places in the world, its reality) are a helpful reminder of the need to acknowledge the difference between marriage, the state’s recognition of marriage and the prevailing culture’s view of marriage. 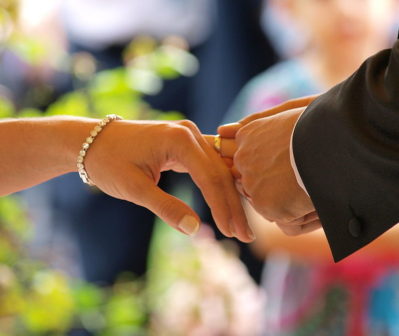 Marriage is an institution given by God and found in creation; that is, it existed before there were governments to recognize it. This is something that I think the culture at large, and with it many Christians, have forgotten – imagining that the state creates rather than merely recognizes marriage. This means that marriage something, it’s not anything we imagine, and it’s not having the word associated with a relationship; rather it is (at least) a public and lifelong voluntary and exclusive sexual union between a man and a woman from different families.[1] The existence of any particular marriage is of course easiest to notice when entered into by some public ceremony and accompanied by registering the marriage with the state – but it is not the only way marriages are formed. Our Christian culture has I think privileged the state’s recognition, reluctantly conceding that while some aren’t properly married, they might be “married in God’s eyes.” I suggest we should have it the other way around – there are those who are married, and then some who might not be properly married in the state’s eyes. Three quick thoughts to reinforce this distinction:

So when we turn to think about the Same Sex Marriage debate we must notice that from a theological perspective it is misnamed. Properly speaking it is really the end of the state’s specific recognition and registration of marriage. Of course not all changes to would have such an effect. In fact in 1975 with the introduction of no-fault divorce we had such a change. The state’s registration of marriage didn’t end (although many would argue it did help end a lot of marriages).

But this change is different. No longer will the state register marriages; rather it will register a broader category, albeit one which continues to include marriage. If you like, the state will no longer register “knives”, but instead it will register “cutlery”; a knife is not specifically registered, but it is included in the wider denotation of cutlery. And this shift, if and when it occurs, will be something to mourn, and the significance of the shift is behind much of the intensity as the issue is discussed. But some of the heat would dissipate if, when parliament amended ,it also amended its name (to say Many of us would still grieve that marriage was no longer registered but we wouldn’t be frustrated with the pretense that it still was: we would still think there was good reason to register knives, forks and spoons separately (and I think there are good reasons for the state to have proposed a separate civil union act), but we wouldn’t have to pretend that all cutlery was the same.

Of course while we think the debate is misnamed we should acknowledge that from the wider culture’s point of view it isn’t: this change has been on its way for a while now. Some decades ago, marriage, its recognition by the state, and the culture’s view roughly aligned: most people thought — and the state recognized —that marriage was exclusive, lifelong, and heterosexual. But the sexual revolution and the availability of contraception and abortion made a significant dent in the society’s beliefs. In the biblical world, marriage, sex, and openness to children just went together naturally. Today, those things aren’t necessarily linked in people’s minds: we can have sex without marriage or children, marriage without sex or children, and children without marriage or even sex. All that’s left to the cultural view of marriage is something like “a serious commitment of love between two individuals”.

So to the issue at hand: if the legislation is amended, should Christians continue to accompany their formal ceremonies with state registration? I am going to leave aside the question of whether anyone should de-register, which has additional complexities, and just focus on the question concerning those marriages that haven’t yet occurred.

Before we answer this though, it is worth pausing to ask why we (as a Christian culture) were so insistent on (rightly) registering our relationships with the state. Of course, some of that insistence was that we imagined the state created marriage – I think that was what I probably thought at the time; but aside from that, there were good reasons to register my marriage with the state. After all I was making a public, binding and clear commitment – and here was a state willing to help! It’s not just that the registration immediately conferred the status of marriage, eliminating the need for a passage of time to pass before the state recognized (without registration) the existence of a marriage; it also helped clarify and reinforce what the what the commitment was, including imposing genuine impediments to ending the relationship. Not to welcome that help would be to indicate some reluctance, reservation or embarrassment on my part – all things which would undermine the very commitment I was making.

At this point we should admit the clarity with which we communicate what we are doing will be somewhat compromised. We are doing and others will think we are doing I can understand the argument that says, “When I get married I don’t want to communicate that I’m doing the same thing as a civil union.” We should also acknowledge the significance of language: without the words to name something it becomes harder to recognize and protect it. As the multi-lingual amongst us will occasionally say, language has no equivalent for that And our culture is trending towards having no word for marriage.

This doesn’t mean that we should abandon registration just yet. We can recognize that while it isn’t registering marriage, it is still registering something with significant things in common with marriage. We can admit the confusion that still using the word marriage brings. But the word has had to take modifiers for sometime, each referring to something distinctive, but not necessarily marriage. So we have “de facto marriages” (which are real marriages) and “open marriages” (which aren’t). For now I think we can live with the need to add the modifiers of “real”, “Christian”, “traditional” or “heterosexual”. Further, registration will still bring immediate and real clarity and protections to our marriages, for example still imposing some impediments on ending them. But this may change. The definition may shift towards “any kind of commitment between any number of people” further compromising our already impeded communication, or it may shift to requiring a commitment to something inherently wrong. At that time, when registration is either meaningless or inherently immoral, we may then need to have ceremonies where we ask each other if we would mind not being married (having needed to find alternate language) for the rest of our lives.

[1] This definition drawn from Christopher Ash,

[2] Cf. the excellent discussion of the complexities of unmarried cohabitation, consent and informal marriage in 222-45.

Tim Adeney is married to Ally and they have four daughters, a son-in-law and a granddaughter. They live in Sydney’s Inner West and belong to an Anglican Church there. Tim currently tutors with Youthworks College. He has a BA from UNSW and a BTh from Moore College.