Journalist and author Greg Sheridan has just released a new book titled ‘Christians: The Urgent Case for Jesus in Our World’. He opens with this explanation of why he wrote it: 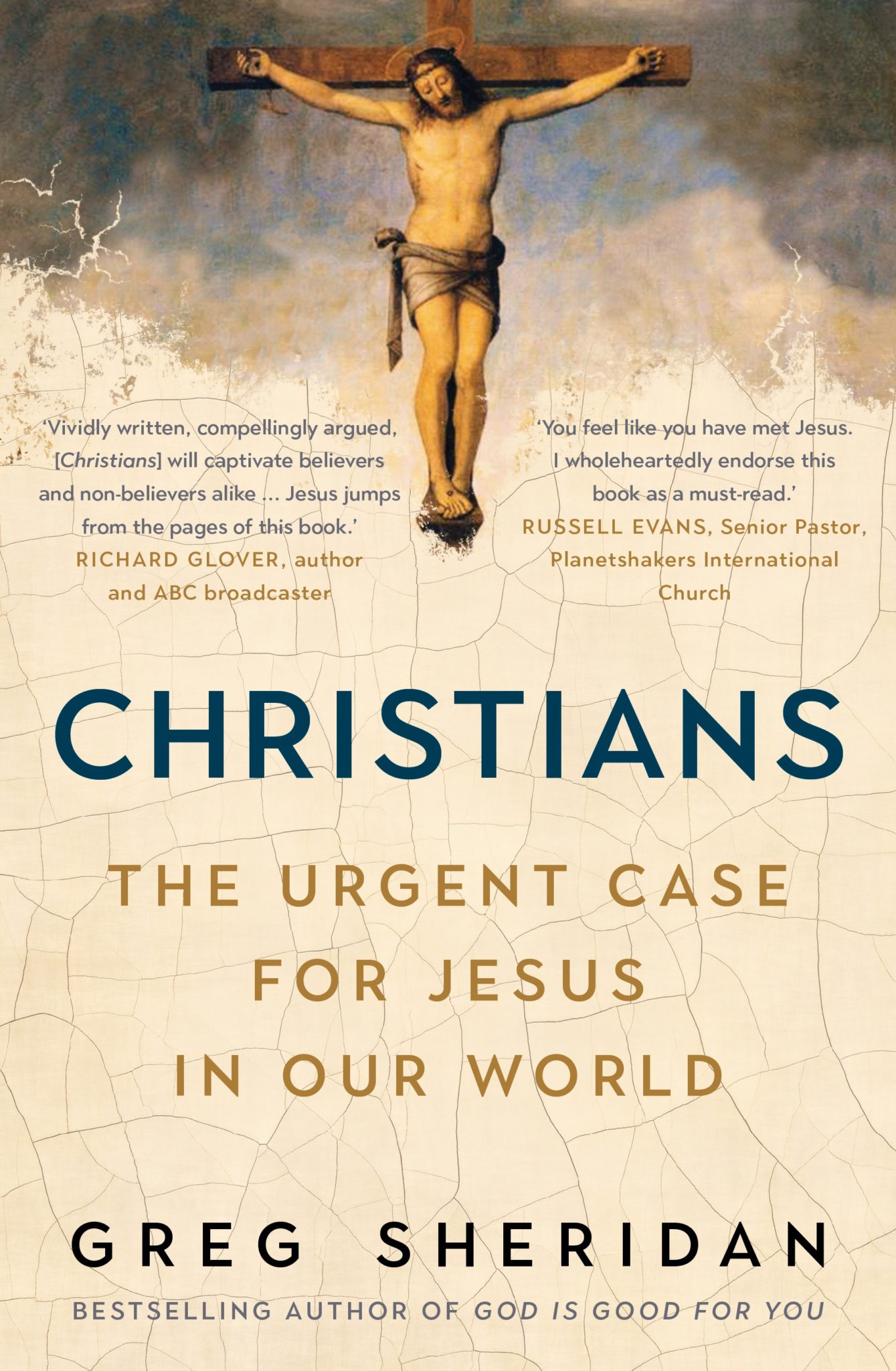 Christians: The Urgent Case For Jesus in Our World

Christians: The Urgent Case For Jesus in Our World

Vividly written, compellingly argued, [Christians] will captivate believers and non-believers alike … Jesus jumps from the pages of this book.

As such, it’s a book that will encourage Christians in their relationship with the Lord Jesus. But it’s also a book that will help the curious and the sceptical understand the Jesus of the New Testament. As ABC Broadcaster and Atheist Richard Glover wrote in his review:

Vividly written, compellingly argued, [Christians] will captivate believers and non-believers alike … Jesus jumps from the pages of this book.

The book consists of two parts.

Part 1, ‘Jesus and His First Friends’—starts by exploring the historical evidence for Jesus (Chapters 1 and 2). It then moves on to exploring what the New Testament says about Jesus (Chapter 3), Mary (Chapter 4), Angels (Chapter 5). It finishes with a discussion of the apostle Paul, ‘Christ’s Lenin’ (Chapter 6).

Part 2, ‘Christians and Their New Worlds’, explores the impact Christianity has had on the lives of people past and present. From the influence of Christianity on writers such as J.R.R. Tolkien and Marilynne Robinson to Christianity’s presence in modern TV dramas such as the cop show ‘Blue Bloods’ (starring actor Tom Selleck—a devout Catholic).

The book ends on the joyous note that, although these are challenging times, Jesus is with us.

We hear from Christians of different faith traditions, some of whom are engaging popular culture (Chapter 7), to those in the thick of charity and evangelistic work (Chapter 8). In Chapter 9 we hear from political leaders driven by their faith (Scott Morrison, John Anderson, Peter Cosgrove), and get a glimpse of Christianity in today’s China (Chapter 10). The book also delves into the life and faith of Singaporean political leader George Yeo (Chapter 11). In the final chapter, we meet various Church leaders who are pushing ahead with the mission (Chapter 12).

The book ends on the joyous note that, although these are challenging times for Christians, the Jesus of the New Testament is with us—‘For Christ is Risen’.[2]

The Historicity of Jesus

There is much to love about this book, starting with Sheridan’s discussion around the evidence for Jesus.

The early chapter on the historical Jesus (‘Jesus is history, living and true’) is worth the price of the book. Although not a biblical scholar, Sheridan the journalist has done a fantastic job weaving together the complex scholarship of New Testament history. He makes the evidence for the historicity of Jesus not only accessible to the layperson, but interesting.

He raises questions about secular scholarship that assumes miracles and the Divine cannot exist:

[I]t is a crippling disability for a secular scholar to come to the study of Jesus with the preconceived absolute conviction that there is no divine, there is no miracle. That will distort historical research because it will lead the historian to embrace fanciful and exotic explanations to try to explain something which is inexplicable. [3]

Furthermore, he explains how modern discoveries have upended much older scholarship that thought people wrote the New Testament generations after Jesus:

The old modernist project, extant for the last two hundred years or so, held that the Christian scriptures had been written perhaps hundreds of years after the time they described, made up by scheming Church officials to retroactively fit up Jesus with orthodox religious views. Jesus, the modernists said, may or may not have existed at all. Certainly, they concluded, he was not God, nor did he claim to be…But it turns out everything about the modernist project was wrong. Fragments of the Gospels were found that were much earlier than the modernists thought possible …Other archaeological discoveries showed us the New Testament accurately described Jewish society at the time of Jesus.[4]

Once you accept that the New Testament is the work of eyewitnesses, and reporters who spoke to eyewitnesses, then Jesus becomes the most richly documented figure of the ancient world. [5]

So much for the popular DaVinci Code view of the Bible.

And yet, Sheridan is measured in his conclusions about the strengths and limits of historical investigation:

Indeed. The New Testament teaches that ultimately God is the One who brings people to himself (e.g. John 6:65): there is a spiritual dimension to belief in God, not merely an intellectual one. And yet, faith in God is not anti-intellectual: it is evidence-based:

But there is nothing in history to convince the believer, or indeed just the fair-minded inquirer, that the Gospels are not true. [7]

In other words, faith in Jesus is a reasonable faith, not a leap in the dark against the evidence.

Sheridan weaves in stories of Christians past and present who have been transformed by Jesus.

Throughout the book, Sheridan weaves in stories of Christians past and present who have been transformed by Jesus: from Mary, Jesus’ mother, to the apostle Paul (who of course had a transformative impact on taking the gospel to the wider world); from Kanishka Raffel (the new Anglican Archbishop of Sydney, and the first non-Anglo one) to Scott Morrison, and several others—some well-known (e.g. John Anderson), but others who are not (e.g. Salvation Army officers).

The Jesus Who Transformed The World

Sheridan also brings his sharp journalistic eye to exploring the impact of Christianity on the world—especially western culture. He puts forward a powerful and convincing argument—referencing no less than acclaimed English Scholar Larry Siedentop—that Christianity had a transformative effect on the world:

Siedentop traces the emergence of liberalism over the centuries directly to the introduction of Christian universalism…it is the revolutionary egalitarianism of Christianity, spiritual and ultimately civic, which transformed the world and provided all the universalistic categories which animate our thinking today. [8]

Christianity’s impact on the West is a point our culture needs to hear, especially when many secular people still think such beliefs as universal human rights are self-evident and ‘reasonable’.

But as human history and modern-day ideologies such as Critical Theory show us, assumptions about human worth and dignity—regardless of skin colour and class—are not self-evident. They require a bedrock of Christian belief to make them plausible. As Christianity leaves the Western building, these universalistic beliefs are becoming more and more fragile.

Some Points to Note

It’s worth noting that ‘Christians’ is not a short book.

Sheridan is a cracking good writer. His prose is punchy and fast-paced, and I was never bored.

At 355 pages, it’s a solid read. This length has its benefits: Sheridan can go into detail in his chapters. While this is a book you should give away to your non-Christian friends, the size could be daunting to some who are not used to reading longer books. In his defence, however, Sheridan is a cracking good writer. His prose is punchy and fast-paced, and I was never bored.

Another point to note is that Sheridan avoids entering discussions around contested theological topics:

I have consciously taken a ‘mere’ Christianity’ approach, honouring every Christian tradition (and every Christian) that can recite the Apostle’s Creed and mean it. I have no interest in comparing favourably or unfavourably one Christian denomination with another. [9]

Thus Sheridan’s definition of Christian is broad: not everyone he writes about would be able to sign The Gospel Coalition Australia’s Foundation Documents.

To be fair, however, this wasn’t Sheridan’s aim. He desired to show the impact of the message of the crucified and risen Lord Jesus Christ on those around him.  And in that aim, Sheridan succeeds admirably.

Overall, whether you’re a Christian or a non-Christian, Christians will help you know the Jesus of the New Testament better. And for that reason alone, it’s well worth reading.

[1] Greg Sheridan, Christians: The Urgent Case For Jesus In Our World (Crows Nest

Akos also has a Master of Arts (Theology).