Gordon Menzies is Associate Professor of Economics at the University of Technology in Sydney, Australia. Before that, he tutored at Oxford and worked in the Reserve Bank of Australia. To read this book is to enter a witty conversation with the author over six chapters of astute cultural analysis. The conversation is about what Menzies terms, “western fundamentalism.” He argues that the word “fundamentalism” for some is what he calls “a sleep-word.” It unthinkingly becomes associated with negative traits that short-cut rational debate, especially when religious ideas are concerned. Importantly, he argues that “… there is an important distinction to make here between tolerance of people, which is a virtue, and tolerance of ideas, which need not be a virtue.” He critically examines various definitions of fundamentalism which short circuit discussion before arriving at his own. Menzies stipulates:

A fundamentalist is someone who bases the way they live and see life on key beliefs (i.e. fundamentals) that cannot be proved. (Original italics) 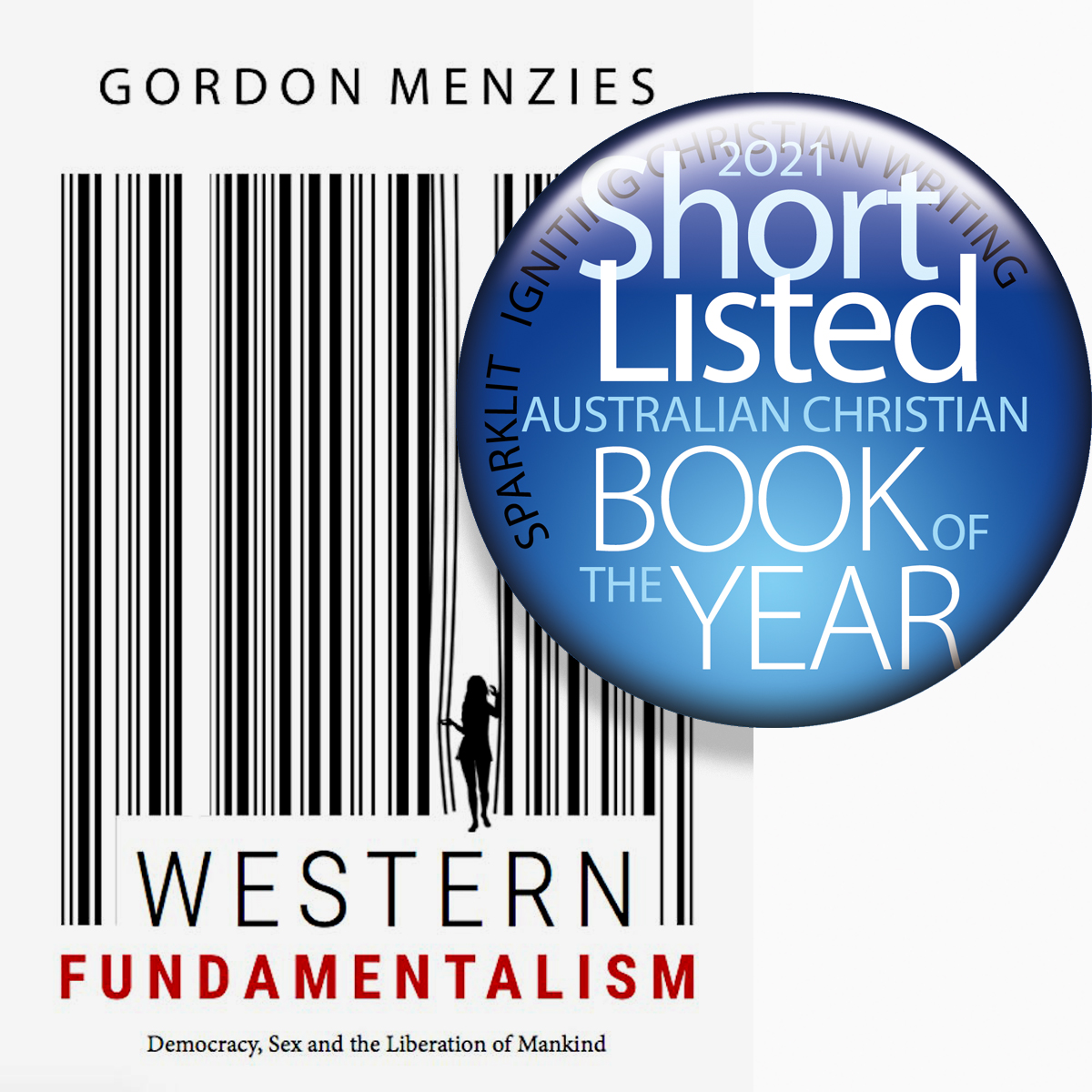 Western Fundamentalism: Democracy, Sex and the Liberation of Mankind

Western Fundamentalism: Democracy, Sex and the Liberation of Mankind

Given Menzies’ definition, we are all fundamentalists … We all live by certain fundamentals whether we are aware of them or not.

Given Menzies’ definition, we are all fundamentalists. We all live by certain fundamentals whether we are aware of them or not. Living in the West means being shaped by key beliefs which reflect the kind of economy and political system in which we live, move, and have our being. He explores three such fundamentals which are widely embraced in the West: democracy, free markets, and sexual freedom. Each fundamental has a chapter devoted to it.

Regarding democracy, he points out that democratic processes can lead to historically evil consequences. He cites as evidence the Nazis in Germany in 1932, racism in South Africa in 1948, and pederasty in ancient Greece (men and boys). For democracies to avoid evil outcomes requires an optimism about human nature that, according to Robert Dahl whom Menzies quotes, “… is a gamble on the possibilities that a people, in acting autonomously, will learn to act rightly.” For Menzies, however, “democratic evil” is a real possibility given human nature (the heart). Democracy is no guarantee of moral progress.

Next, Menzies considers free markets. Here the ideas he examines include: the power of prices, greed is good, your wage equals your worth, people deemed to have low net worth, everything should be for sale, and everything has a price. He raises acute questions about the effects of such ideas on the value of children and marital relationships. For example, from a free-market vantage point, monogamy could be seen as a harmful, market restriction. Not that Menzies advocates this as one learns—as the next chapter on sexual freedom shows. As I am not trained in economics, I found this the most challenging chapter to understand but well worth the effort.

The last fundamental Menzies examines is sexual freedom which he sums up as “relational commodification.” His question is “…whether another kind of deregulation has been a disaster. When sexual norms that protect people no longer apply – or are actively dismantled by deregulation – are there opportunities for exploitation?” Menzies argues persuasively that there are, especially for children. In this discussion, Menzies’ Christian worldview is explicit. He sees the sexual revolution as a deregulation of the Christian ideal of marriage.

In these chapters on democracy, economy and sexual freedom, Menzies is showing that ideas have consequences and some of those consequences are actually deleterious to human flourishing.

Menzies sees Ayn Rand as an embodiment of much of Nietzsche’s thinking.

He nominates nineteenth-century thinkers, J. S. Mill and Friedrich Nietzsche as the prophets of the western world. Menzies selects Mill because of his advocacy of liberal democracy and the do-not-harm principle, and Nietzsche because of Nietzsche’s promotion of the mighty, autonomous individual (Übermensch) who is free of any kind of religious restraint. He sees Ayn Rand as an embodiment of much of Nietzsche’s thinking.

There is no mistaking that Menzies writes from a Christian perspective. His own fundamentals are revealed in the last chapter. He champions three equalities: “Equal in creation” (imago dei), “Equal in brokenness” (sin), and “Equal in redemption” (salvation). Regarding the latter, his point is that “God’s offer of salvation is made to all humans without discrimination.” Although Menzies is an economist, he has read widely in other disciplines. For example, he knows the Bible and is deeply read in theology, sociology, and philosophy—ancient, modern, and postmodern—as his endnotes show.

He is realistic about the strengths and weaknesses both of a free market and a democratic one. Free markets can hurt the vulnerable and democracy does not “automatically protect the vulnerable,” (original emphasis). His discussion of sexual freedom is especially interesting, as he points to those whose ideological commitments lead to concern about the effects of the free market on the marginalised, but not (ironically) for the effect of similar free-market principles in the area of sexuality.

Menzies’ aim in this book is to foster an “informed respect for fundamentalists.” (Again, he defines a fundamentalist as a person holding fundamental beliefs.) “Without informed respect,” he warns, “a society that grows to be even more diverse than our own could start treating dissidents in the way that totalitarian societies have.”

There is much wisdom in this short book, along with keen insights into the western context and the challenge it poses—especially for the Christian. His tone is admirably eirenic. He aims to provoke thought. He succeeds.

I strongly commend this book. Menzies has won awards as a teacher at his university and one can see why. He uses evidence carefully, and has many apt metaphors, and examples to facilitate understanding. I for one am much the wiser about my own fundamentals and context having read it.

Graham Cole is Emeritus Dean and Emeritus Professor of Biblical and Systematic Theology. Trinity Evangelical Divinity School, and Emeritus Principal of Ridley College. He has authored four books: Engaging with the Holy Spirit: Real Questions, Practical Answers; He Who Gives Life: The Doctrine of the Holy Spirit; God the Peacemaker: How Atonement Brings Shalom; and The God who Became Human: A Biblical Theology of Incarnation.