What are your teenagers reading? Before I read this new translation of The Sacrifice of Praise by Herman Bavinck (a Dutch writer and reformed theologian of the late 19th and early 20th century), I was feeling rather pleased that my teenager, who is generally an avid Percy Jackson fan, had raised his literary bar and was reading A Gentleman in Moscow. In response to the very solid spiritual food that Dutch teenagers were reading over a hundred years ago, I’m now seriously considering how to raise the bar of his devotional reading and understanding of spiritual truths.

Before I read this I was feeling rather pleased that my teenager was reading A Gentleman in Moscow. In response to the very solid spiritual food that Dutch teenagers were reading over a hundred years ago, I’m now seriously considering how to raise the bar

The Sacrifice of Praise was first published in 1901 and became a best-seller for teenagers who were seeking confirmation—or as Bavinck puts it—admittance to the Lord’s Supper. This book is not a scholarly work. It was written for laypeople and was extremely popular in the early 1900s, selling 40,000 copies and running to 10 editions and 16 reprints. The title refers to Hebrews 13:15: “Through Jesus, therefore, let us continually offer to God a sacrifice of praise—the fruit of lips that openly profess his name” and the book is concerned with showing how and why Christians are called to do this as well as what is meant by professing the name of Christ publicly. 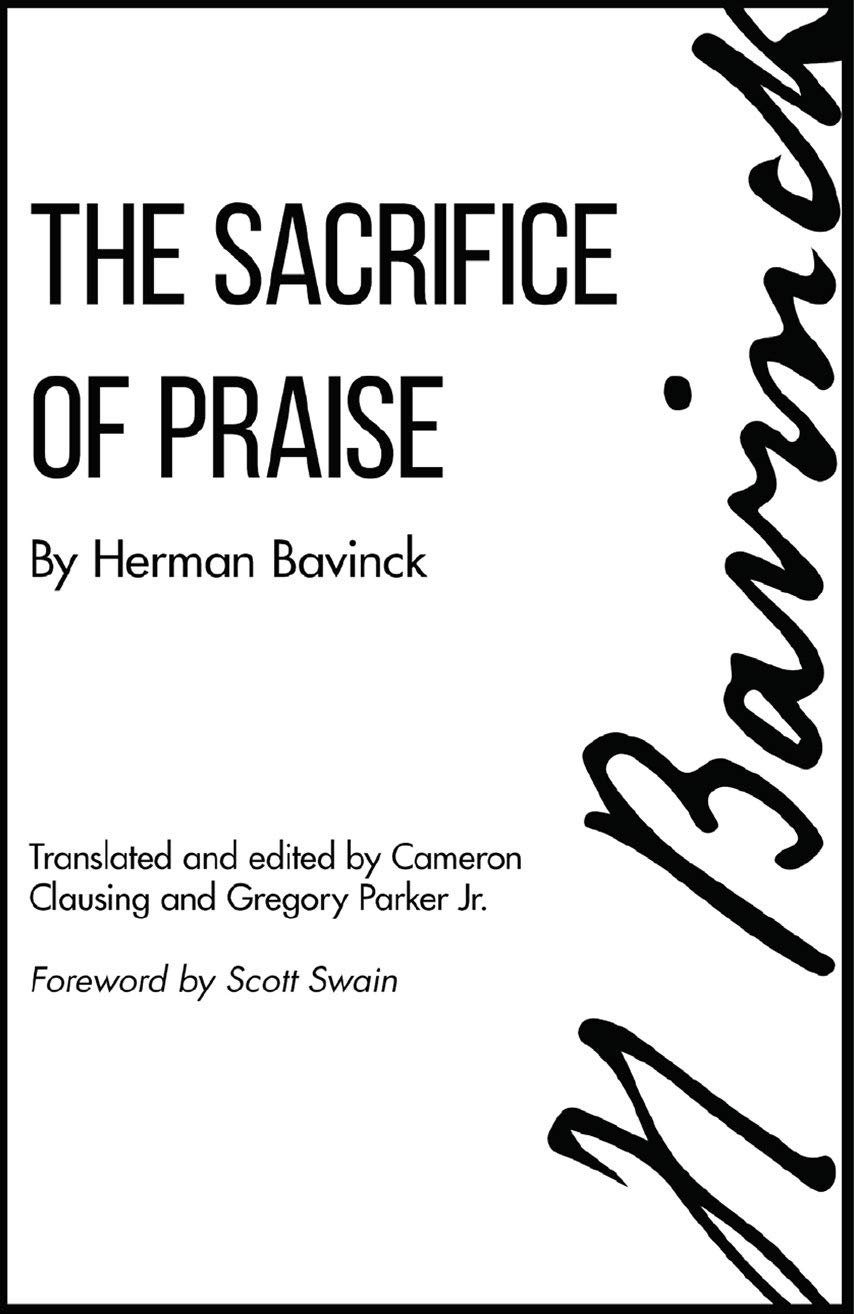 If we consider our teenagers capable of engaging with the intricacies of Greek Mythology or Russian revolutionary history, then they can surely be entrusted with the doctrines of the faith in which we have been bringing them up since birth. In twelve short chapters of around six pages each, Bavinck explains clearly and carefully what Reformed Christians believe about God’s covenant of grace, election, the place of social justice, different denominations, Christ as the only means of salvation, good works, the Christian life, and the eternal rewards of faithful service. His focus is not on what he calls “doctrinal righteousness”, but on a changed heart and public witness to Christ and his gospel.

Bavinck writes that our children “are God’s most valuable earthly blessing” and that as parents who are part of God’s covenant of grace, we have a particular obligation to examine how we influence and train our children in the way we would have them go. The Dutch parents who purchased this book for their teenagers were serious about guiding their children to mature faith and in this they set us a good example. We don’t do our children any favours by setting the spiritual bar low and I suspect that in their spiritual walk (as in various other aspects of life) they are capable of far more than we tend to expect from them.

How seriously do we parents take our spiritual responsibility? It’s easy to feel that if we get our teenagers to church and a decent youth group most weeks, restrict what they watch on TV and limit screen-time we are on the right track. This little book has reminded me to persevere in reading and discussing the Bible with my children. In the same way that children are physically nourished by food, Bavinck explains that “the word of Scripture in the hands of parents…under the blessing of the Lord, serves to nourish the spiritual life.”

Bavinck points out that our witness as Christians must reach all corners of our lives. Not just our words but also our actions should confess Jesus as Lord, serving as an example for our children to follow. While God’s grace is not dependent on my witness, by God’s grace, what my children see in me each day should bear witness to the spiritual reality of someone who is a new creation in Christ. This witness cannot be silent, and so honouring God involves a measure of public Christianity. This looks very different in 2019 than it did in 1901, but Bavinck rightly points out that human hearts do not change. The temptations of our flesh, the world and Satan are ever-present, and we still carry the inclination in our hearts to deny Jesus and to be ashamed of the cross.

Confessing Christ crucified is foolishness to the world and because of this it takes courage and a mature faith to confess the name of Christ, especially in public. If humans had invented it, the gospel would be very different. It would be far more aligned with our desires and passions and we would proclaim it without the false sense of shame that sometimes accompanies our witness to God’s word. Bavinck puts it this way, “the gospel may be for man; it is not in any respect according to man. Whoever decides to fashion it according to the spirit of the age, according to the opinions of the day, robs it of its power.” While I would very much like to protect myself and my children from the possibility of public ridicule, the Bible attaches great importance to the confession of our mouths as evidence of salvation, and we should bring our children up in the light of this truth.

While the language in this volume is no more difficult than that encountered in children’s classics from the same era, I imagine that its handling of topics such as God’s covenant of grace for believers and their children and how this fits together with election as well as the obligation of public witness, would be challenging and unusual to many teenagers from Christian families. But if you are keen to move your own teenagers or older youth group members from milk to solid food, then this book might be a good one to read with them. It explains what our faith is founded on and lays out the challenge of making confession of faith our way of life. As you read together, also pray with them that God would move their hearts to offer up a sacrifice of praise.