While a good number of books have been written about the theology behind and the practice of evangelism, there are far fewer books that helpfully seek to evangelise the everyday non-Christian. In fact, I often struggle to think of a go-to evangelistic book outside the Bible that I would happily give my non-Christian friends.

It is into that void that Dan Paterson and Rian Roux have written Questioning Christianity. At an accessible 176 pages, it is a persuasive invitation for readers to discover and step into the Christian story. Questioning Christianity seeks to present not just the truth of the gospel, but also its goodness and beauty. And it does so in a way that engages both minds and hearts. 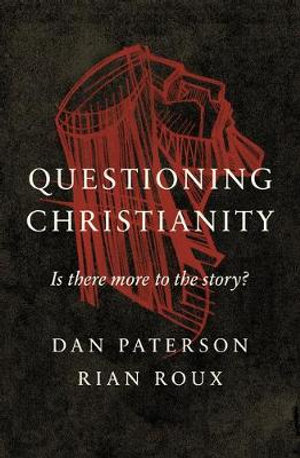 Questioning Christianity: Is There More to the Story?

purchase
Purchase at the Wandering Bookseller

Questioning Christianity: Is There More to the Story?

It begins with the premise that all humans live out a story that explains “who we are, why we are here, and what we should be chasing” (9). And against that backdrop, it offers the Christian story as the most compelling reality. Where the evangelists of a previous generation sought to make the evidential case for Christ, Paterson and Roux appeal to our innate human intuitions and ask us to consider “whether or not the [Christian] story sheds light on reality and matches the soulish contours of what you know, deep down, to be true” (13). This is but one example of the authors’ vivid and even poetic language that itself engages our intuitive imaginations. In both form and substance, this book invites us to “taste and see that the Lord is good” (Psalm 34:8).

Taste and see that the Lord is good.

Questioning Christianity is split into three parts. Paterson and Roux move from explaining the Christian story to helping us step into it and finally inviting us to question it. Part 1 presents the gospel by tracing six turning points in the biblical narrative: Garden (creation), Tower (sin), Nation (blessing), Cross (redemption), Church (mission), and City (eternity). In Part 2, the authors practically demonstrate what it looks like to step into the Christian story by outlining five core aspects of new life in Christ. The book concludes with Part 3, an invitation for readers to question the Christian story. It is here that Paterson and Roux are at their best as they deftly engage seven evidential and existential objections to Christianity.

Where much of our evangelism seeks to clearly present the truth of the gospel, Paterson and Roux offer a compelling invitation to enjoy its goodness. In this respect, they recognise that contemporary objections to Christianity are primarily ethical rather than evidential.

Paterson and Roux offer a compelling invitation to enjoy its goodness

In a 2017 report, McCrindle Research found that: “Church abuse is the biggest blocker to Australians engaging with Christianity”.[1] In fact, 57 per cent of respondents said that church abuse massively or significantly influenced their negative perceptions of the Christian story. As Stephen McAlpine observes, “in the eyes of much of Western society, Christianity is the bad guy (or at least is fast becoming so). Christianity is the problem.”[2] With skill and sensitivity, the authors engage that perception by answering a series of moral objections to the Christian story: What if the snake was right and God cannot be trusted? How could a good God allow suffering? And how can God be good when the church is so bad?

This final chapter on church abuse is particularly compelling because it answers a significant contemporary objection with empathy and clarity. Paterson and Roux don’t overlook or seek to defend the morally indefensible. Instead, they openly acknowledge that

Even in our own lifetimes, horrendous evils have been exposed, with those who bear God’s name having done reprehensible things under the institutional cover of the church (164).

The authors gently direct us to the goodness of Jesus who himself sharply criticised the religious hypocrites of his day. They also point out that the failings of the church ironically highlight the beauty of his grace: “as messy as the church is, and despite any perception that the church is beyond saving, Jesus loves the church” (168).

This focus on Jesus as the evangelistic centre carries through the whole book in a manner that unmistakably casts him as the hero of the Christian story. The gospel narrative presented in Part 1 climaxes with the life, death and resurrection of Jesus. Every chapter in Part 2 centres on Jesus as the means of our new relationship, the foundation of our new community, the one who secures our new identity, the model of our new way to live, and the one whose mission becomes our new purpose. Even in Part 3, the authors repeatedly present Jesus as the answer to our biggest apologetic questions: “Beyond philosophical arguments and defensive answers…, the best positive case for God’s goodness is undoubtedly Jesus” (110). You cannot read this book without seeing over and over again that Jesus is what makes the Christian story so compelling.

I wonder though whether the way in which the authors present the human predicament falls short of identifying the root of our problem. In their chapter describing the Fall, human sin is framed as the result of having broken a set of cosmic laws:

Cause and effect are built into the substructure of our universe … Just like any attempt to break the laws of nature tends to end up with us being broken by them, God warned that to go against the moral grain of His design would always lead to suffering. (26)

However, our suffering is less the result of having violated God’s moral order. It is the symptom of a far deeper predicament: God’s holy wrath. The enmity between human beings and creation is not simply a matter of universal cause and effect—it is the direct result of God’s curse on humanity (Genesis 3:17-19). Both the Apostle Paul and the Lord Jesus confirm that our fundamental problem is not with the world, the flesh or the devil—it is with the Lord and his wrath (Romans 1:18; John 3:36). However, this crucial point and any mention of God’s wrath are conspicuously missing from the book. The authors appear to present sin as a cosmic offence with godward consequences, but the Bible reveals that sin is a godward offence with cosmic consequences. This means that the final judgment is not merely the restoration of our world. At its heart, it is “the coming wrath”; God’s personal, holy, and justified anger at our sin (1 Thessalonians 1:9-10).

Any mention of God’s wrath [is] conspicuously missing

It may be the case that Paterson and Roux are simply adopting a cosmic characterisation of sin as an “emotional, existential and cultural point of entry”.[3] That is, they may be intentionally describing sin in this manner to resonate with the human desire for universal justice, in order to connect the non-Christian with the gospel. Assuming this is the case, even though the authors might not get to the heart of our godward predicament, they offer a compelling starting point to understanding sin and its consequences.

In many ways, this book is the ideal evangelistic conversation starter. It is “an introductory glance into mammoth topics” (106); a first step into the Christian story.

We need more books like Questioning Christianity that helpfully seek to evangelise the everyday non-Christian. I would happily give this book to any of my non-Christian friends, confident they would encounter the glories of Jesus— the one who sits at the centre of the Christian story.

[1] McCrindle Research, “Faith and Belief in Australia: A National Study on Religion, Spirituality and Worldview Trends” (May 2017): https://mccrindle.com.au/wp-content/uploads/2018/04/Faith-and-Belief-in-Australia-Report_McCrindle_2017.pdf, 32-33.

[3] Sam Chan, Evangelism in a Skeptical World: How to Make the Unbelievable News about Jesus More Believable (Grand Rapids: Zondervan, 2018), 99.

Adam Ch’ng is the Senior Pastor of Cross & Crown: Melbourne. He also serves on the Executive Committee of the Fellowship of Independent Evangelical Churches and the TGCA Victoria Committee. Adam studied Arts and Laws at Monash University and theology at Ridley College. Prior to entering gospel ministry, he worked as a workplace relations lawyer and then as adviser to the Minister for Employment in the Abbott Government.