At one level, our culture’s rejection of its ancestral faith has never been so enthusiastic, so complete, so aggressive. It looks, for all intents and purposes, like a divorce of the acrimonious variety. And yet, our world remains so deeply Christian. We continue to use the convictions, the thought-forms, and even the metaphysics of the faith we are so keen to reject. Our apparently self-evident commitments to equality, progress, and compassion are Christian artefacts, even as our relationship with the faith that bequeathed them to us comes unstuck. If these values are Christianity’s children, their paternity is contested—or not even considered but assumed to be from somewhere else. Our collective ignorance of Christianity’s influence is so complete that we don’t even stop to wonder where these values came from. Never having met their parents, we are unable to spot the family resemblance. We imagine these things are just there. Like a fish in water. Like the air we breathe.

We continue to use the convictions, the thought-forms, and even the metaphysics of the faith we are so keen to reject.

Enter Glen Scrivener’s new book, The Air We Breathe. In it, Scrivener provides a compelling, well-researched, and confident account of the West’s debt to Christianity and to Christ. The writing is full of pluck and warmth. And, despite its intellectual rigour, the book’s tone is more that of an animated late-night argument in a pub—all friendly like, but with no-holds barred 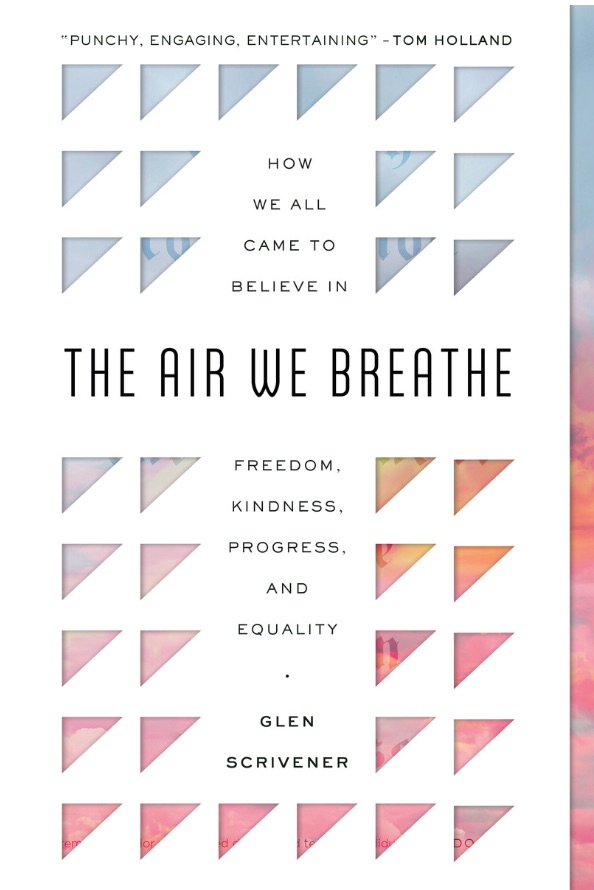 The Air We Breathe

The Air We Breathe

Today in the west, many consider the church to be dead or dying. Christianity is seen as outdated, bigoted and responsible for many of society’s problems. But what if the Christian message is not the enemy of our modern Western values, but the very thing that makes sense of them?

In this fascinating book, Glen Scrivener takes readers on a journey to discover how the teachings of Jesus not only turned the ancient world upside down, but continue to underpin the way we think of life, worth, and meaning. Far from being a relic from the past, the distinctive ideas of Christianity, such as freedom, kindness, progress and equality, are a crucial part of the air that we breathe.

Scrivener is not the first to spot this gap. Tom Holland’s Dominion is a magisterial account of similar space from a secular perspective; John Dickson’s Saints and Bullies from that of a Christian historian. Scrivener comes in as a straight-up evangelist. And it works. Brilliantly.

Scrivener begins by framing the three audiences he has in mind: the “nones”, the “dones” and the “wons”. The “nones” are that increasing group who answer “none” when asked about their religion. The “dones” are those who were once Christian, or Christian-adjacent, but are now done with it all. And the “wons” are those who have been won by Christ. All three groups will find valuable things in this book. But Scrivener’s pen (and, one suspects, his heart) is firmly directed toward the first two.

Between the first and final chapters, Scrivener explores seven deeply held moral or epistemic convictions: equality, compassion, consent, enlightenment, science, freedom, and progress. In each case, he demonstrates that these values, far from being as self- evident as “the air we breathe,” are in fact the products of Christianity, the means by which Christ continues (as Flannery O’Connor puts it) to haunt our culture.

The argument is compelling, and the communication style vivid and energetic. The chapters move more or less chronologically. We begin with a picture of the ancient world, and, like a printing-press adding one colour after another, the book slowly composes a rich picture of how we got from the classical world to our world. How did we come from a world in which equality was unthinkable, compassion undesirable, and consent unimportant to one in which, on 25 May 2020, the death of George Floyd sent us into collective convulsions of moral outrage? Such a response was, in the classical world, unimaginable. By 2020 it was inevitable. Why? The reason, in a word, is Christ.

Some books on this topic are written in service of the culture wars, providing a theological argument for why West is Best. This is not that book.

Others in this realm can be overly timid, addressing the modern, secular person as if Christianity was the Beta version of the moral certitudes progressive secularists now enjoy. Christianity wasn’t quite feminist, or LBGT-affirming, or one hundred percent against slavery, but, hey! Look at the trajectory! Can we please have partial credit? This is not that book, either.

The Air We Breathe is neither cultural warrior nor shy apologist. It’s evangel.

The Air We Breathe is neither cultural warrior nor shy apologist. It’s evangel. It’s pugnacious, confident, and willing to call out the assumptions and blind-spots of its reader. It leaves us neither sentimental about our past nor smug about our present. It challenges us. It calls the reader (respectfully and generously) to be more evidence-based, more critical, less susceptible to magical thinking that says these things just are.

This is a swash-buckling adventure-ride of a book. It’s academically grounded, culturally attuned, and full of evangelistic chutzpah. I’d put this into the hands of any of my secular friends in a heartbeat.

Rory Shiner studied Arts at the University of Western Australia and theology at Moore College in Sydney. His PhD is on the life and work of Donald Robinson. He is senior pastor of Providence City Church in Perth, where he lives with his wife, Susan, and their four boys. He has written books on Union with Christ and on the relationship between Jesus’ resurrection and our own. His most recent book, The World Next Door: A Short Guide to the Christian Faith, is out now.