I see no hope for the future of our people if they are dependent on frivolous youth of today, for certainly all youth are reckless beyond words.

Can you guess when this expression of frustration of young people was said? It feels so contemporary in 21st century Australia, but it actually comes from Hesiod, a Greek poet, in the 8th century BC! Frustration and fear for our youth are not new. And (speaking as an old white guy), criticising the youth of today is what you’d expect of me and my generation. My generation got everything right of course—like supercharging global warming, precipitating financial meltdowns and walking on the moon. 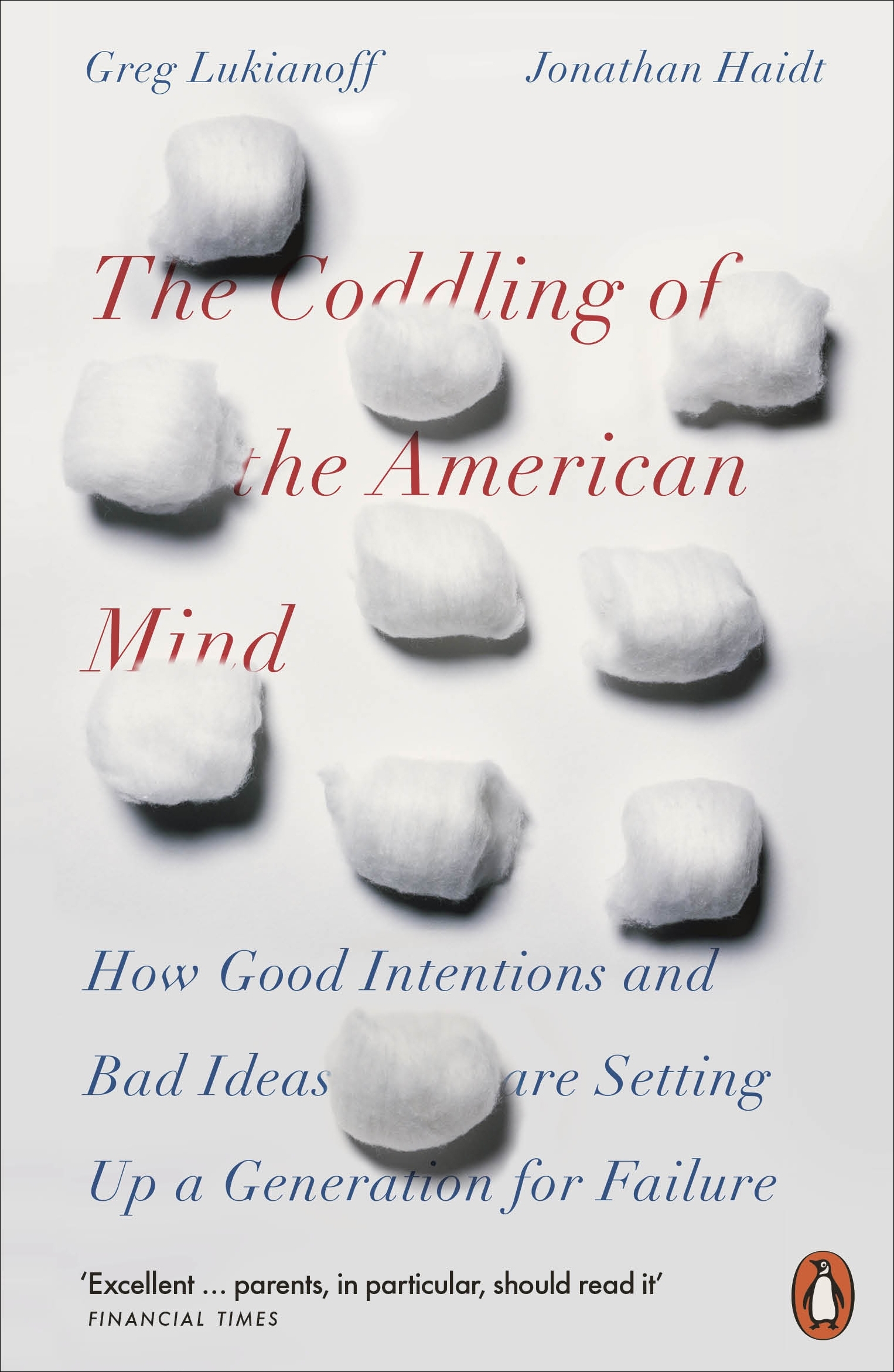 The Coddling of the American Mind: How good intentions and bad ideas are setting up a generation for failure

The Coddling of the American Mind: How good intentions and bad ideas are setting up a generation for failure

Frustration and fear for our youth are not new. And criticising the youth of today is what you’d expect of me and my generation.

Naturally, we assume we were shaped by all the right forces. We had to fight for what we believed, so we learnt how to argue and persuade (ourselves) and be unpopular. We knew we couldn’t trust our feelings, so we maintained a stoic bravado on the outside while dying within. But you tell that to the youth of today, and they won’t believe you! (with apologies to Monty Python’s 4 Yorkshiremen)

But is the most recent generation of young people really worse than their predecessors? My generation has labelled them Gen-Z or iGen, although they just think of themselves as normal. Either way, it is time old guys like me took notice if we want to win this generation to faith in Jesus and encourage them to live courageous lives of faith. If we are on a different planet and don’t realise it, we will pass them like ships in the night.

One book that has helped me in my attempt to understand iGen is ‘The Coddling of the American Mind’ (Greg Lukianoff and Jonathan Haidt), which goes by the subtitle of ‘How good intentions and bad ideas are setting up a generation for failure’. The title and subtitle tell you that the authors share much with Hesiod.

The authors—both academics: one a lawyer committed to free speech advocacy, the other a social psychologist committed to Cognitive Behaviour Therapy—are sounding a loud alarm at what they perceive to be seismic shifts in the culture of student populations at American universities from around 2015. We now give it labels like ‘cancel culture’ and ‘identity politics’—the strong activism that seeks to de-platform speakers and suppress ideas that are perceived as being offensive or harmful. They perceive that the flip side of this activism is fragility and a great lack of resilience. They reckon that iGen has been ‘coddled’ (to ‘coddle’ is to treat someone in an indulgent or overprotective way)—a word that is so wonderfully evocative that I found myself irresistibly attracted by the cover.

The aim of the book is to describe the symptoms of this fragile culture, explain its origins, and offer some solutions. And from my limited experience and analysis of Australian university students, a lot of what they say makes sense to me. The book is built around a central thesis that 3 Great Untruths have gained intuitive traction among iGen, especially those from middle and upper classes. These are (spoiler alert):

The authors clearly think these are lies, at least as a general description of human reality. And I am in broad agreement with them in this assessment. Their reasons for thinking so is psychological research that proves it empirically. I  think they are lies too, but my basis is theological, and I am not surprised that human wisdom concurs.

For me, the value of the book was particularly in the story they told about how we got here. It is a salutary lesson in how good intentions without a robust theological understanding of human nature descend into dystopia so easily. One example they use is the fear of strangers that went mainstream during the time iGen were small children. Despite much counter evidence, parents were convinced that the streets were dangerous places for children. Unsupervised play was cut and parents began helicoptering. And guess what? Children became more fearful, not less. They became more fragile and more anxious, unable to cope with imagined dangers. And the authors chronicle the upsurge in mental health issues iGen is now presenting with. Something is going on that demands explanation, and (to my untrained ears) the authors seem to have some good explanations.

It is a salutary lesson in how good intentions without a robust theological understanding of human nature descend into dystopia so easily.

If the book aims to change the minds and behaviour of those championing the cancel culture, I doubt it will have much effect. The authors will (and have) found themselves being cancelled because of the book. For such people, the suggested cure is far worse than the disease. But for people like me who are already uneasy with some of the directions in which we see our culture heading, the book is convincing and useful.

The book has given me lots of raw material for thoughtful gospel ministry to university students in Australia. I long to connect gospel realities and salvation to the lives, experiences and inner world of young westerners, and this book has provided a window on their hearts and minds. Lukianoff and Haidt offer explanations for the way in which the longing for justice has energised and shaped the culture of iGen, and how that longing for justice has, in many instances, produced something far from just. One helpful aspect of their narrative is the way it undermines the reductionistic (conservative) narrative that the core problem is a massive conspiracy by the left,—i.e. Cultural Marxism. Though perhaps the authors are a little naïve in regarding all the drivers of these cultural shifts as ‘Good Intentions’, as if there were no self interest or power play.

The authors offer solutions, but since neither has any spiritual commitment, their solutions are purely pragmatic. They prescribe risk-taking to build resilience; cognitive behavioural therapy to counteract emotional reasoning; empirical data to fight ‘us vs them’ polarisation.

Pragmatic solutions, while helpful and wise, will not be able to solve the underlying human causes of the cancel culture and anxiety.

But I want to assert loud and clear that such pragmatic solutions, while helpful and wise, will not be able to solve the underlying human causes of the cancel culture and anxiety.

So, for the evangelist of iGen, the book offers some wonderful insights. But only the gospel of Jesus offers lasting hope.

Finally, this book is crammed with illustrative material for preachers. It quotes academic studies to support its explanations. It tells anecdotes that illustrate the culture they are analysing and critiquing. The authors share their thinking processes is a way that is easily accessible to non-academics. But the authors also did me a service by working hard not to make too much of a story or statistic. They work hard to not tell a biased one-sided story (at least they appeared to do so). I hope I will be as honest with stories and figures.

This is not one of those seminal books that will set the parameters of future discussion and change the way the world thinks about an important subject (eg Taylor’s A Secular Age) But it is a significant book, because it describes, and accounts for, a significant unavoidable reality of the culture of the young people of today. For their sake, I reckon it worth reading.

Tim Thorburn serves with the Australian Fellowship of Evangelical Students in Perth, and as Executive Director of the Perth Gospel Partnership. In a former life he worked as an engineer before retraining for gospel ministry. Rosemary is his partner in life and ministry, and they have 2 adult children.

Let’s name the brutal truth first: Australian churches have been in more or less unmitigated decline since 1963. As from that date, fewer and fewer people have been involved in our churches, fewer people have been connected to our ministries, and almost every major Christian denomination has had fewer people wanting to own them in the census, even if only to identity the church they no longer attend. There have been bright patches. Theological education in Australia is strong. Student work is a bright spot. There have been revivals in Aboriginal communities in the 1980s and 1990s with substantial and long-lasting...