Saturday (December 11) marked the 103rd anniversary of the birth of Alexander Isayevich Solzhenitsyn, giant of literature and conquering dissident hero of the Soviet years. Here, by way of brief memorial and commendation, is a short sampler review of The Gulag Archipelago.

One of the most affecting books I read (listened to) this year was the single-volume edition of Alexander Solzhenitsyn’s The Gulag Archipelago.

On one level, I knew what to expect; when I was growing up, older members of my family were reading the original volumes as they came out in English. Solzhenitsyn’s ideas were freely discussed—part of the pickling-broth of my childhood.

Solzhenitsyn’s ideas were  part of the pickling-broth of my childhood.

But of course, the impact of actually hearing it direct was a completely different experience. For a start, I had no idea of the scope of Solzhenitsyn’s achievement—cataloguing the history of Soviet oppression and documenting the experience of hundreds of actual prisoners while he was still living under that regime. It was eye-opening and humbling. Who could read such a book without feeling dwarfed by the moral courage and sheer force of will displayed by the author. 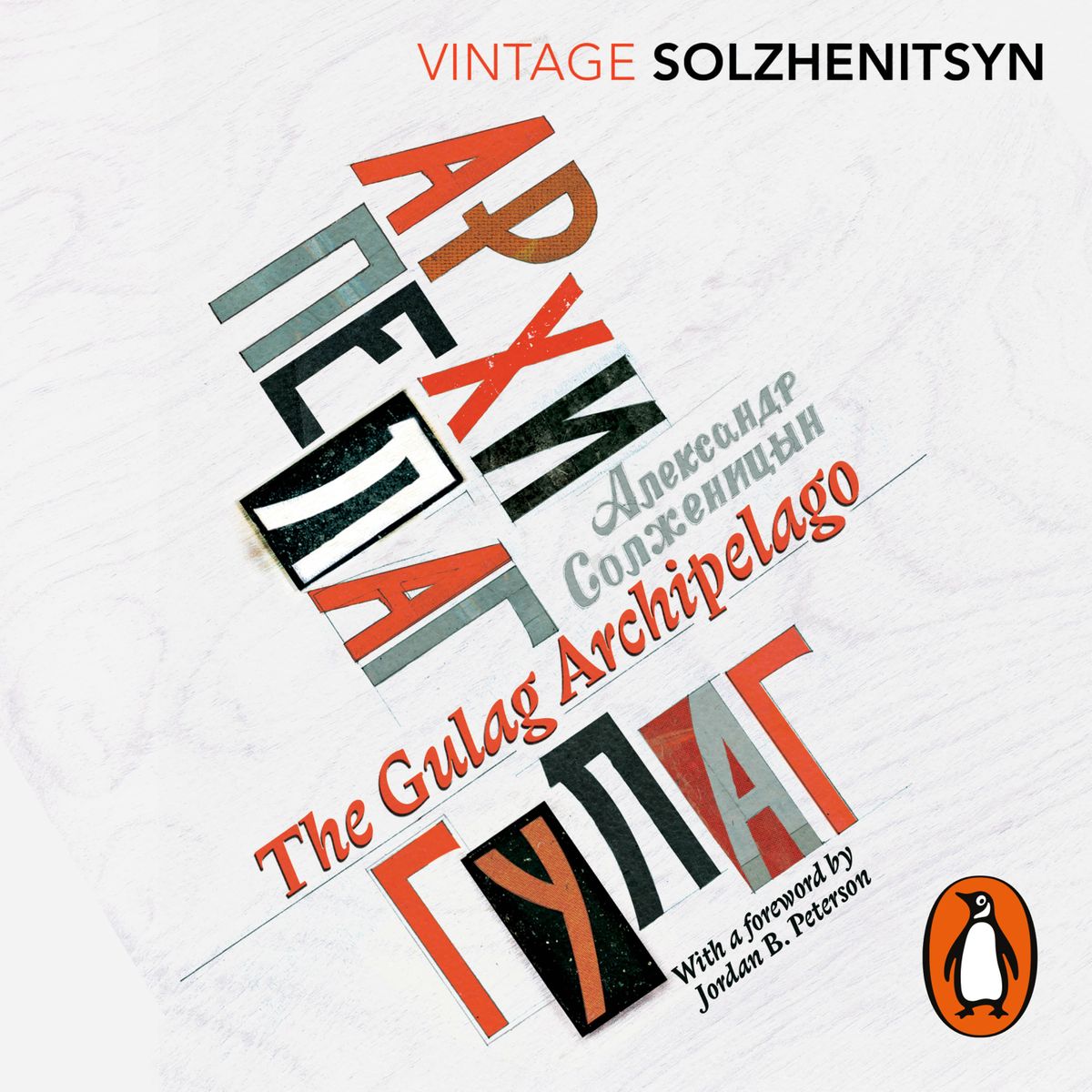 The book, like its author, is unrelenting. It describes what it was like to be processed by the Soviet machine: the logic, horror, strategies, cruelty, stupidity, corruption and endless waste that characterised the whole state, and the prison system as a microcosm of that state.

It is not a fun book to read. But it is more than worthwhile. Even after all this time—or maybe especially after all this time—reading The Gulag Archipelago remains one the most bracing and head-clearing experiences. Solzhenitsyn shows us what governments are really capable of when the gloves come off. As he writes at one point:

Power is a poison well known for thousands of years. If only no one were ever to acquire material power over others! But to the human being who has faith in some force that holds dominion over all of us, and who is therefore conscious of his own limitations, power is not necessarily fatal. For those, however, who are unaware of any higher sphere, it is a deadly poison. For them there is no antidote.

Such words may be music to the ears of those on the left and right who denounce authoritarianism. But for, it is not simply the power that corrupts, but ideology. Solzhenitsyn comes as close as possible to showing that it wasn’t simply an accident of history and personality that created Soviet tyranny, but the inner logic of communism itself. I wish those who dare to speak positively about Marx and his heirs could be encouraged to read and consider The Gulag Archipelago.

But The Gulag Archipelago is not simply a dismal catalogue nor a political diatribe. It is full of stories and insights. It is uplifting, spiritual and useful—indeed, for those worried about the future loss of freedom, it might even serve as a primer or a hack. Let me give you a taste with some of the quotes that I kept from my listening:

How can you stand your ground when you are weak and sensitive to pain, when people you love are still alive, when you are unprepared? What do you need to make you stronger than the interrogator and the whole trap? From the moment you go to prison you must put your cozy past firmly behind you. At the very threshold, you must say to yourself: “My life is over, a little early to be sure, but there’s nothing to be done about it. I shall never return to freedom. I am condemned to die—now or a little later. But later on, in truth, it will be even harder, and so the sooner the better. I no longer have any property whatsoever. For me those I love have died, and for them I have died. From today on, my body is useless and alien to me. Only my spirit and my conscience remain precious and important to me.” Confronted by such a prisoner, the interrogator will tremble.

And as soon as you have renounced that aim of “surviving at any price,” and gone where the calm and simple people go—then imprisonment begins to transform your former character in an astonishing way. To transform it in a direction most unexpected to you. And it would seem that in this situation feelings of malice, the disturbance of being oppressed, aimless hate, irritability, and nervousness ought to multiply. But you yourself do not notice how, with the impalpable flow of time, slavery nurtures in you the shoots of contradictory feelings. Once upon a time you were sharply intolerant. You were constantly in a rush. And you were constantly short of time. And now you have time with interest. You are surfeited with it, with its months and its years, behind you and ahead of you—and a beneficial calming fluid pours through your blood vessels—patience. You are ascending …

Formerly you never forgave anyone. You judged people without mercy. And you praised people with equal lack of moderation. And now an understanding mildness has become the basis of your uncategorical judgments. You have come to realise your own weakness—and you can therefore understand the weakness of others. And be astonished at another’s strength. And wish to possess it yourself. The stones rustle beneath our feet. We are ascending …

With the years, armour-plated restraint covers your heart and all your skin. You do not hasten to question and you do not hasten to answer. Your tongue has lost its flexible capacity for easy oscillation. Your eyes do not flash with gladness over good tidings nor do they darken with grief. For you still have to verify whether that’s how it is going to be. And you also have to work out— what is gladness and what is grief. And now the rule of your life is this: Do not rejoice when you have found, do not weep when you have lost. Your soul, which formerly was dry, now ripens from suffering. And even if you haven’t come to love your neighbours in the Christian sense, you are at least learning to love those close to you.

(And here, the echoes of 2Corinthians 4. I was pleased to see parts of this quote used very appropriately in Terrence Malick’s “A Hidden Life” about an imprisoned Austrian Nazi resister.)

I am grateful to Dr. Boris Nikolayevich Kornfeld, who is sitting beside my cot and talking to me all evening. The light has been turned out—so it will not hurt my eyes. He and I—and there is no one else in the ward. Fervently he tells me the long story of his conversion from Judaism to Christianity. … I am astonished at the conviction of the new convert, at the ardor of his words. We know each other very slightly, and he was not the one responsible for my treatment, but there was simply no one here with whom he could share his feelings. He was a gentle and well-mannered person. It is already late. All the hospital is asleep … the door from the corridor gleams in a yellow electrical glow. But there is such mystical knowledge in his voice that I shudder. These were the last words of Boris Kornfeld. Noiselessly he went out into the nighttime corridor and into one of the nearby wards and there lay down to sleep … [only to be] dealt eight blows on the skull with a plasterer’s mallet while he still slept … He died on the operating table, without regaining consciousness.

Notice the lyrical quality of the writing, the light that suffuses the scene of Kornfeld’s murder, which also seems like a martyrdom—a death in the midst of life and life-giving.

N. Stolyarova recalls an old woman who … [sheltered] a former Metropolitan of the Orthodox Church, who had escaped from exile …“All right then. To whom did he go when he left Moscow?” [they asked her.] “I know, but I won’t tell you!” … At first the interrogators took turns, and then they went after her in groups. They shook their fists in the little old woman’s face, and she replied: “There is nothing you can do with me even if you cut me into pieces. After all, you are afraid of your bosses, and you are afraid of each other, and you are even afraid of killing me.” (They would lose contact with the underground railroad.) “But I am not afraid of anything. I would be glad to be judged by God right this minute.”

How many currently nameless heroes of the faith will rise up on the last day with stories like this. May God give us all such clear eyes, no matter what sorts of pressures and temptations we face in this life.