“After reading a new book, never allow yourself another new one till you have read an old one in between.”“All that is not eternal is eternally out of date.”(C.S. Lewis)

In the canon of English literature, any list which includes Chaucer, Shakespeare and George Eliot (and of course John Paul George & Ringo) will always feature John Milton (1608-1674). Milton is a towering figure in Western culture. A contemporary of the Puritans, he was deeply involved in the complex political and ecclesiastical controversies of his day. Theologically and politically an ‘Independent’, he actively opposed the Royalist party to the end of his days.

Milton is a towering figure in Western culture.

However the lasting contribution of John Milton lies in the world of literature. Best known as the author of Paradise Lost and Paradise Regained, he also wrote the Epic poem Samson Agonistes (1671). This was the account of God’s unlikely Spirit-anointed Judge in Israel (Judges 13-16). At the climax of the biblical account of Samson’s exploits, God triumphs over his enemies and those of his rebellious people, through the blindness and death of his ‘rebel saviour’ (Judges 16:20-31). Milton resonated with God’s conflicted servant. In 1651, aged 43, and at the height of his power and political influence, he was dealt a devastating blow when he became completely blind. We are not left to guess how Milton felt. As the darkness descended, he wrote of his struggle to come to terms with the life God now called him to live. Sonnet XVI is a demanding read but well worth the effort, and best read out loud. 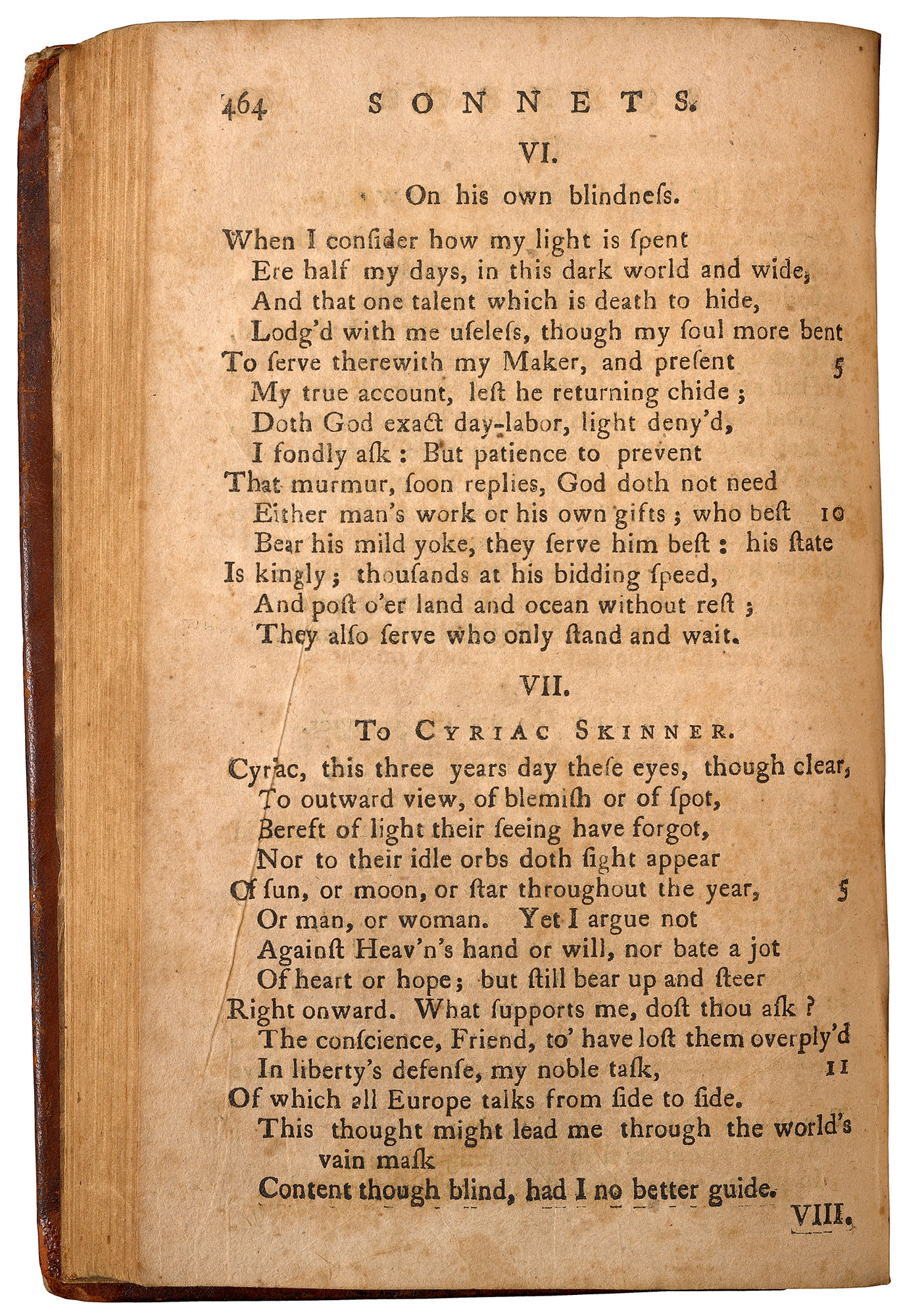 Sonnet XVI – on his blindness[1]

When I consider how my light is spent,
E’re half my days, in this dark world and wide,
And that one Talent which is death to hide,
Lodg’d with me useless, though my Soul more bent
To serve therewith my Maker, and present
My true account, lest he returning chide,
Doth God exact day-labour, light deny’d?
I fondly ask; But patience to prevent
That murmur, soon replies, God doth not need
Either man’s work or his own gifts, who best
Bear his milde yoak, they serve him best, his State
Is Kingly. Thousands at his bidding speed
And post o’re Land and Ocean without rest:
They also serve who only stand and waite.

Lament – that one Talent which is death to hide

For a writer such as this to go blind is in the same category as Beethoven becoming deaf. Milton had been absolutely clear about his place in the world; single-minded about his purpose in life and what he wanted to achieve. He knew why God had made him and gifted him in the way that he had. All he needed was a mind to think God’s thoughts after him, eyes to read God’s word, the Ancients, the world around him, and the light of the sun to see by. But ‘half way’ through his days his light was used up, ‘spent’. For Milton the world he had known was now impenetrably ‘dark and wide.’ Though still living, now, through his blindness to have that ‘one talent hidden … lodg’d with him useless,’ was first experienced as a kind of living ‘death’.[2] Why had God gone done this to him? Didn’t he want him to do the work he had given him? If he had to give an account for all that God has given him, why had his Maker given him light only to now withdraw (‘deny’) it?

…though my Soul more bent
To serve therewith my Maker, and present
My true account, lest he returning chide,
Doth God exact day-labour, light deny’d?’

Spirit-Directed Self-Talk: ‘God doth not need either man’s work or his own gifts’

Even as his sight failed him, Milton’s vision grew stronger.

But even as his sight failed him, Milton’s vision grew stronger. Whatever else happened to him, he still knew that God was his Maker and his Saviour. He was a child of God, in whom the Holy Spirit dwells. The Spirit’s fruit of ‘Patience’ is personified in the 8th line and talks back to lament: ‘God is not limited by your blindness. This disabling and loss is not the end of your life. It is life’s continuation on the path in which God’s life will be revealed in you. Every gift that you have, and all that you are, including your sight, is God-given. Sometimes God takes gifts away, even those we think are most fundamental, in order to give us others that we would never choose.’

But here is the most wonderful thing. This loss that Milton experienced did not leave him a useless and empty shell.

… But patience to prevent
That murmur, soon replies, God doth not need
Either man’s work or his own gifts.

All of the gifts we enjoy and use in service of others, and offer up as our sacrifice to God, are his own gifts which he provides for us. God is not deficient, vulnerable or needful of anything we could give him. All things belong to him and come from his hand. God is the giver of every gift. We don’t need certain gifts; a particular situation in life, in order to be useful and significant; to ‘be someone’ or to count. In the case of Milton, the great man of letters, he did not even need his eyes. What—rather, Who—we need, and all that we need, is God. Through faith in Christ, by the Holy Spirit who lives in us, we have him! We know and love God our Maker as our own loving heavenly Father. More importantly, we have full assurance that we are known and loved by him (Psalm 73:25-26; John 17:26; Galatians 4:6-7). The answer Milton receives is that all we can ever do is to receive with empty grateful hands the life, the gifts and the situation which in his goodness, God decides to give to us.’

The true Kings and Queens in God’s World

Historians write of kings and queens and heroes—those who impress us with their beauty, brilliance and achievements. But God writes a different kind of history. It is not finally about the kingdoms of this world, but his kingdom and his anointed King, Jesus Christ (John 18:33-40). God’s story is the story of Jesus’ brothers and sisters: the small, weak and foolish ones—the ‘least’ who are the greatest in the kingdom of heaven (Matthew 11:11, 25-30; 1Corinthians 1:26-31).

This is what Milton reminds himself of as he writes this Sonnet: ‘I am one of them. The most ‘kingly’ thing about me is not my writing or my poetry, but that I belong to God!’ The Creator doesn’t wait on His creatures and their achievements. No, we ‘wait for him.’ We ‘serve best,’ not by our own prowess, our own might, but as we entrust ourselves to his work in our lives. Every day we walk in the good works He has prepared for us to walk in.

They also serve who only stand and waite

History remembers Milton as a giant of English literature. God knows him as his dearly loved child. The hope that sustained John Milton and his true ‘fulfilment’ came, not finally in his great political or literary achievements, but in the knowledge that he was known by God. Blindness and the life it forced on him—to ‘stand and wait’ for the return of his king—was not a passive thing. He was a servant of God who knew that his life and times were in God’s hands (e.g. Psalm 90).

Whatever our situation in life—in our strengths and weaknesses, wins and losses; our mountain-top joys and dark valley disappointments; whether we are out and about and fighting fit, or laid low and house-bound—the children of God are the brothers and sisters of the King and co-heirs with him in glory. We serve the Lord, and we proclaim the Kingdom of His Son (2Cor 4:5-6). We live and we die for him and in him. This is the life that is never wasted nor lived in vain.

… God doth not need
Either man’s work or his own gifts, who best
Bear his milde yoak, they serve him best, his State
Is Kingly. Thousands at his bidding speed
And post o’re Land and Ocean without rest:
They also serve who only stand and waite.’

To live a life half dead, a living death, and buried; but O yet more miserable!
Myself, my Sepulcher, a moving Grave, Buried,
Yet not exempt by priviledge of death and burial from worst of other evils, pains and wrongs,
But made hereby obnoxious more to all the miseries of life.’

Andrew Prideaux is a senior staff worker at the University of Melbourne with the Christian Union and the Simeon Network (AFES). Andrew is married to Vannessa and they have four children (three in secondary school and one at University). When not teaching, reading the Bible with students or writing, he enjoys listening to records and taking part in various musical projects. Andrew’s commentary on Job is forthcoming as part of the Reading the Bible Today Series (Aquila Press).

1 Type A and Christian

2 Every School is a Religious School

3 Is There a Place for Women on a Theological College Faculty?

5 The Heart of Holiness