Down here in Melbourne, bus-stop advertisements are telling us that the Art Gallery of NSW is currently hosting an exhibition of iconic nudes from the London Tate collection. “Nude” exclaim the posters over a photograph of Rodin’s “The Kiss.” Apparently, this is the first time that iconic sculpture has left Europe, and it’s a centrepiece of the exhibition.

“It’s a work that has amazing presence and power,” said the gallery’s curator in an interview with the ABC. “It’s one of the world’s most famous images of human love.” 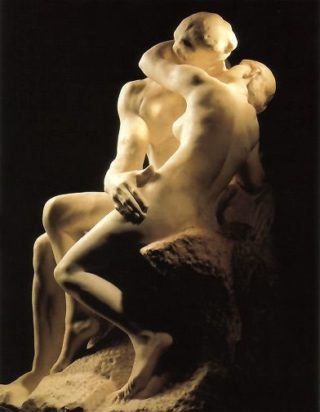 Well so it is, but I found out something interesting about “The Kiss” recently. It’s actually a story from hell.[1] The lovers depicted are Francesca De Rimini and her brother in law, Paolo, who turn up in the second circle of Dante’s Inferno. Murdered for their adulterous passion (depicted in the famous sculpture) and now judged by God for their lust, Francesca and Paolo appear as shades bound together in an eternal embrace as the infernal storms fling them endlessly through the darkness like leaves on the wind.

In his story, Dante hails the pair from a distance and listens to their tale. “Love has conducted us unto one death,” laments Francesca; “love that exempts no one beloved from loving.”

Dante is deeply disturbed by this and casts his face down: “How many pleasant thoughts, how much desire, conducted these unto the dolorous pass!”

As a poet and a romantic, Dante has good reason to be troubled. He himself, we soon learn, has been caught by idolatrous passion. The great love that rules his heart is not directed toward God, but to Beatrice, a saintly girl who died years before. More on her shortly.

A Message for Us

The beauty of the frozen moment in “The Kiss” stands for the belief that a kiss might be enough; that, if we just found the right person, we might gaze into their eyes forever and be filled. But of course, that only works for statues. A movie which tried to convey the same idea would be boring and ridiculous. In real life, it would quickly become torture.

And by now, I think, we have seen enough of the romantic experiment to know that its outcome ends in a pretty similar place to that described by Dante. In our time we have seen romantic love buffeted by storms of divorce, casual sex, abortion, infidelity and abuse. As the winds pick-up we see still more dissipation: romantic love in tatters and ripped free from its anchors in biology, gender and monogamy.

All this churning is inevitable because we humans are not the answer to each other’s need. The beatific vision of infinite glory and depth that we all seek cannot be found in mortal eyes. If we seek fulfilment like that we preparing ourselves for perpetual dissatisfaction and ever-more desperate attempts to fix what’s wrong. 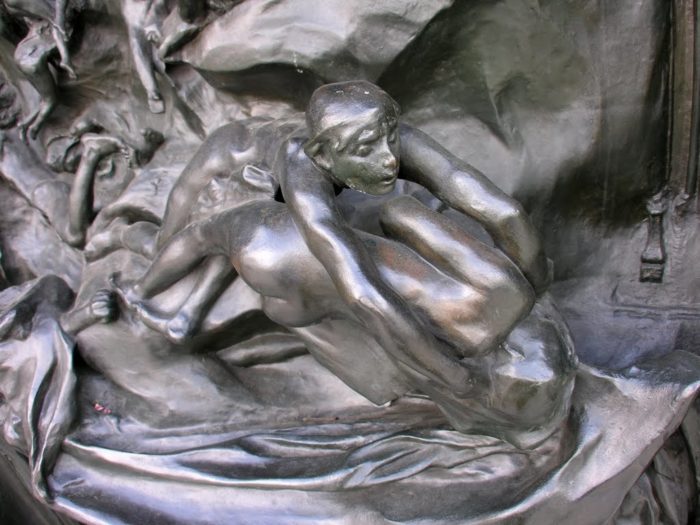 The Source of Desire

As he ends his journey through hell and purgatory, Dante finally meets the guide who will escort him through paradise: it’s Beatrice, now transformed into a creature of indescribable beauty and holiness. Indeed, as she and Dante proceed and get closer to the highest heaven (the Empyrean), her radiance steadily increases. Her beauty is so distracting that Dante must be continually reminded to turn his attention away from her.

The reason why her beauty blooms like this is because her glory is a reflection of God’s. As she draws closer to him her joy and glory necessarily grows. Accordingly, Dante needs to learn to look beyond her so that he can encounter the true source of her beauty. As if to reinforce this, we learn that the last leg of the journey must be led, not by Beatrice, but by other saints. It is  Bernard of Clairvaux, and then Mary, who conduct Dante toward his final encounter with the Triune God—“the end of all desires.”

All this might sound very medieval and Catholic—and it is. But there’s also a deep truth in it. Dante is telling us about his realisation that carnal desires can only be right when we allow them to point us to the God who gives them. When we come to terms with their relationship to him, we idolise these created things less—but we can also love them better, understanding the true nature of their beauty.

The End of Romance

And what of those who miss out on romance? What of those who will never know a kiss like “The Kiss,” or whose experience of romance has been nothing but disappointment? Jesus himself supplies the answer. To the Samaritan woman at the well—the failed romantic with her five husbands—Jesus offers himself. He is the only man who will ever be really able to satisfy her.