The English preacher John Stott visited Australia in January 1965 and this visit, one of many, had a profound effect on Australian preaching.[1] Stott gave Bible studies on 2 Corinthians at the Anglican Church Missionary Society Summer Schools in several States in Australia. Much Australian preaching at that time was on ‘a text’, that is, on an individual verse from the Bible, often without much regard to its context. In his Bible studies John Stott was demonstrating the obvious value of preaching from passages of Scripture, and from consecutive passages of Scripture. His example had a profound impact on Australian preaching, initially transforming preaching in Anglican churches, but soon also in other churches as well.[2]

One person who was profoundly by this change in preaching style was John Chapman, Sydney evangelist.

‘Prior to that, I had tended to get an idea from a passage and leap all over the Bible supporting the idea from other parts so that the people I taught knew the “idea” but not the passage from which it came or how that passage fitted into some overall argument from the Scriptures.’ [3]

‘I heard only one of those Bible studies but I was so taken by the way he stuck to the text and stayed with it. He could show you the logic of the argument in the Scriptures… It is to John Stott that I owe what ability I have to expound the Bible. He provided a model for expository preaching that I could copy and make my own.’[4]

John Chapman and Dudley Foord set up the College of Preachers in Sydney to promote this expository preaching and it was soon promoted at Moore College and enriched by the Biblical Theology taught by Donald Robinson and Graeme Goldsworthy. In Melbourne a series of Sunday night expositions of the Bible was set up to promote the Stott style.

The Spread of Expository Preaching in Australia

The Spread of Expository Preaching in Australia

This change was effected most rapidly in Sydney, but is also now found throughout Australia. It has spread to many churches, and to university campuses through the work of the Australian Fellowship of Evangelical Students (AFES). People are trained in expository preaching and teaching by a number of good theological colleges and Bible colleges. Australians now contribute to the growth of expository preaching around the world.

I was a new convert when I attended the CMS Victoria Summer School at Belgrave heights in January 1965, when John Stott gave those studies in 2 Corinthians. It was the first time I had heard expository Bible preaching. My response was, ‘That is how to preach the Bible, and that is what I want to do!’ I knew that such preaching would grow churches, and when I went to London in 1972 and visited All Soul’s Langham Place and St Helen’s Bishopsgate, I saw that it worked! With many others, I am very thankful to God for John Stott’s visit, and rejoice at the growth of expository Bible preaching and teaching across Australia. I often go to the commissioning of new ministers in Anglican churches in Melbourne and I often hear the minister say, ‘Next Sunday we are starting a sermon series on Ephesians’ [or some other book of the Bible]. I think to myself, ‘This is the first time this church has had systematic Bible preaching’, and I praise God. I once asked John where the idea of consecutive Bible exposition came from. He replied that he learnt it from the Sunday night Bible readings of the Cambridge Inter-Collegiate Christian Union (CICCU).

Admittedly John Stott had extraordinary gifts of concentration, clarity, and conciseness which are beyond ordinary mortals. His deep thinking enabled a simplicity and clarity of expression. However the model was still transferable: just say what the Bible says, and show its application to our lives today. Stott defined preaching in these words:

With customary clarity he explained that this sentence contained two convictions, that the Bible text is inspired and that the preacher’s task is to open or explain it; two obligations, that we must be faithful to the text and sensitive to our hearers; and two expectations, that God will be heard, and that his people will respond.[5]

In my opinion his example of expository preaching was one of his most significant legacies. So it was with some surprise that I read Alister Chapman’s, Godly Ambition: John Stott and the Evangelical Movement. There is remarkably little about preaching in the book.

At the heart of the confident evangelicalism that Stott created after WWII was his outstanding ministry of expository preaching. It was this that built up All Souls, this that he took around the world, and introduced to places like Australia. His commentaries in The Bible Speaks Today series are a product of this ministry. Under God, he was part of a revival of expository preaching in the UK in the Twentieth Century, which was achieved through Willie Still in Aberdeen, and Martin Lloyd-Jones, John Stott and Dick Lucas in London, and has spread around the world. There is little about Stott’s preaching in Alister Chapman’s book, and his brief comment on it is damning. He writes,

And the expository style of preaching that Stott had believed in for so long, may have been one more Western imposition: its emphasis on the sober explanation of Scripture owed much to the sort of Enlightenment rationalism Stott had first learnt from his stern medical father.[6] 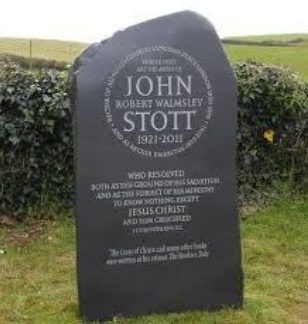 Chapman seems to think that expository preaching is stern and rationalistic. It can be, but there is no evidence that John Stott’s suffered from these defects. To miss the impact and significance of John Stott expository preaching is bizarre. To misinterpret it is mischievous. In 1986 James Houston published a collection of sermons by Charles Simeon, the great evangelical preacher in Cambridge in the Nineteenth Century, and John Stott wrote the Introduction, in which he expressed his appreciation for Simeon’s model of life and ministry, and especially his preaching.[7] It is significant that the words on Stott’s gravestone are based on words on Simeon’s memorial in Holy Trinity Church Cambridge, ‘…who resolved both as the ground of his salvation and as the subject of his ministry to know nothing except Jesus Christ and him crucified’.

[1] See Timothy Dudley-Smith, John Stott: A Global Ministry, Leicester, IVP, 2001, 114–16. This includes an account of this visit, but does not comment on the effects on preaching in Australia.

[3]  Michael Orpwood, Chappo: For the Sake of the Gospel, John Chapman and the Department of Evangelism, Russel Lea, Eagleswift Press, 1995, 158.

Peter Adam is vicar emeritus at St. Jude’s Carlton, formerly principal of Ridley College Melbourne, and vicar of St. Jude’s. His publications include Speaking God’s Words: A Practical Theology of Preaching, Hearing God’s Words: Exploring Biblical Spirituality, Written for Us: Receiving God’s Words in the Bible, The Message of Malachi, The Majestic Son: The Letter to the Hebrews, Walking in God’s Words: Ezra and Nehemiah and For such a time as this: Esther. He speaks at training conferences for preachers. Peter Adam was a founding member of the Council of The Gospel Coalition Australia.

I am half way through my second year of a Philosophy degree. Like most philosophy students, I began my degree with dreams of grandeur (in fact, now that I think...