A few years ago our next door neighbour began investigating Jesus with her husband. When it was obvious that she had genuinely come to understand grace and very visibly begun a relationship with God, it was so thrilling for us to see change occur. All the lights began to go on, joy and peace tangibly descended on to her very demeanor. In a short period of time even the way she spoke and thought was transformed.

Within days, she was already on the phone with her non-Christian family members back in China: telling one that she was praying for the drought there (and would you believe, the next week it rained!); telling another openly about God, and her new life in Jesus. Sharing her faith hasn’t been something that we had to teach her to do, she’s just went ahead and did it.

It reminded me of a couple of incidents in the Gospel of John. Firstly in John 1:

John 1:35–46 The next day John was there again with two of his disciples. 36 When he saw Jesus passing by, he said, “Look, the Lamb of God!” 37 When the two disciples heard him say this, they followed Jesus. 38 Turning around, Jesus saw them following and asked, “What do you want?” They said, “Rabbi” (which means Teacher), “where are you staying?” 39 “Come,” he replied, “and you will see.” So they went and saw where he was staying, and spent that day with him. It was about the tenth hour. 40 Andrew, Simon Peter’s brother, was one of the two who heard what John had said and who had followed Jesus. 41 The first thing Andrew did was to find his brother Simon and tell him, “We have found the Messiah” (that is, the Christ). 42 And he brought him to Jesus. Jesus looked at him and said, “You are Simon son of John. You will be called Cephas” (which, when translated, is Peter ). 43 The next day Jesus decided to leave for Galilee. Finding Philip, he said to him, “Follow me.” 44 Philip, like Andrew and Peter, was from the town of Bethsaida. 45 Philip found Nathanael and told him, “We have found the one Moses wrote about in the Law, and about whom the prophets also  wrote—Jesus of Nazareth, the son of Joseph.” 46 “Nazareth! Can anything good come from there?” Nathanael asked. “Come and see,” said Philip.

The second in John 4:

John 4:28–41 Then, leaving her water jar, the woman went back to the town and said to the people, 29 “Come, see a man who told me everything I ever did. Could this be the Christ?” 30 They came out of the town and made their way toward him. […] 39 Many of the Samaritans from that town believed in him because of the woman’s testimony, “He told me everything I ever did.” 40 So when the Samaritans came to him, they urged him to stay with them, and he stayed two days. 41 And because of his words many more became believers.

In both instances, telling people about Jesus was as natural as spreading hot gossip. These first disciples and the woman at the well were merely “gossiping” about their meeting with Jesus. It was a natural, uncontainable excitement, as natural as “Hey, come and see for yourself!” It was just like our neighbour who had recently been introduced to Christ. And it got me thinking: why is evangelism and introducing people to Jesus so difficult for me in comparison? 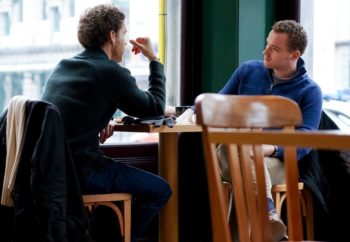 Part of it, I think, is that I’ve turned evangelism into a task of trying to convince people of a set of beliefs rather than introducing people to someone amazing that I know. New Christians don’t see it as anything else except the latter and that’s why it comes so naturally.

Then, evangelism should be easy.

Peter is a church planter and pastor amongst the growing migrant communities in Sydney’s multiethnic South-West Evangelical Church (swec.org.au). He is also the Chairman of RICE (Renewal and Inter-Church Evangelism), a high school and young adults ministry to reach and equip and refresh the thousands of Asian second and third generation in Sydney. He is a graduate of Moore Theological College and is a member of the Australian Fellowship of Independent Evangelical Churches (FIEC). Peter is married to Karen and they have four children.