Recently I’ve been listening to the well-known podcast Stuff You Should Know. I thought it might be fun to have a theological version on TGCA. I am starting with a series entitled: Five Theologians You Should Know. It would be too easy to pick a first XI of course: Augustine, Athanasius, Calvin, Owen, Barth, and so on. But that wouldn’t have the vibe of the SYSK series. So, I have chosen five theologians from church history that you should know about, but probably don’t.

Why should you know about Peter Lombard?

Why should you know about Peter Lombard? 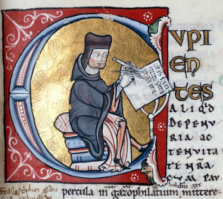 You might say he’s not a very promising candidate for my first Theologian You Should Know. He lived long ago, in the twelfth century, the era of the Crusades, but not so long ago that he is close to the great era of the early church and the church fathers.

He’s a bit of mystery as a person too.

Peter Lombard was called “Lombard” because he was born in Lombardy which is in northern Italy – well that’s what we call it now. He was born in the early twelfth century, and died in Paris in 1160. That was pretty much just after he had become bishop of Paris, in 1158. Before that he had taught theology in the cathedral school of Notre Dame.

It was in this role that he produced his most famous work, The Four Books of Sentences. Huh? Aren’t all books composed of sentences? These were ‘sentences’ in the sense of ‘maxims’ or ‘opinions’, apparently. It is essentially a university textbook, a resource for use in the classroom.

In the Sentences, Peter set out the great questions of theology – the Trinity, providence and evil, creation, sin and grace, incarnation, redemptions, ethics, sacraments and the last things – and invited his students to answer them by providing quotes from Scripture and the church fathers. His table of contents was not chronological, but rather logical.

And at one level that sounds pretty ordinary to us – isn’t that what any systematic theologian tries to do?

Professor Alister McGrath from Oxford University calls the Sentences “perhaps one of the most boring books that has ever been written.” But the Sentences is a book with a massive influence. Huge. Apart from the books of Scripture themselves, it is the book of Christian literature which has been commented on the most. There are more than one thousand known commentaries on this book! As the scholar Philipp W. Rosemann says, “the Sentences must have related the story of Jesus effectively enough for generations of theologians and their students to have found the book a valuable tool for reflection.”

Peter’s book became the standard text book in the Western Church for more than four hundred years, which is not a bad run by anyone’s standards. In fact, doing a commentary on the Sentences was a standard exercise for senior theological students, to the extent that Peter Lombard was known as The Master of the Sentences. The Sentences became for theology what the Well-Tempered Clavier is even today for keyboardists – a standard, but agenda-setting, textbook from which students learnt their craft. Greater theologians than Peter Lombard – men like Thomas Aquinas – were still powerfully influenced by his arrangement of the themes of theology, and by his methods for resolving them. His selection of quotations, especially from Augustine, shaped the way generations after him thought about God. Alister McGrath suggests that Calvin followed Peter Lombard’s basic outline, even as he came to very different conclusions.

In fact, you could certainly trace Peter’s influence on the way systematic theology has developed down to the present day. Peter himself never quite achieved it, but his arrangement of material invites later theologians to think: how does this all hang together? How do the ideas of theology connect to one another?

That’s a question that pastors and theologians still have to wrestle with today.

Not that Peter was a particular innovator theologically speaking. Granted, he was probably the first to nominate the list of seven sacraments now accepted by the Roman Catholic Church. He also argued that sacraments were more than just signs of grace, but actually an effective cause of that grace – something that the Reformers would later vigorously contest. But he was not a particularly controversial guy.

Martin Luther was one of the last great theologians to comment extensively on the Sentences, in 1509-10. But it is Luther’s determination to break with Peter Lombard that is especially interesting. He decided that, even though Peter had tried very hard, he had not let Scripture have enough say. Later in life Luther would be heard to say: “Peter Lombard was adequate as a theologian; none has been his equal. He read Hilary, Augustine, Ambrose, Gregory, and also all the councils. He was a great man. If he had by chance come upon the Bible he would no doubt have been the greatest…”

He also said: “Peter Lombard was a very diligent man with a superior mind. He wrote many excellent things. He would really have been a great doctor of the church if he had given himself wholly and truly to the Holy Scriptures, but he confuses the Scriptures with many useless quotations.”

Perhaps this is too harsh a judgement on the old master, but it shows one of the traps into which theology may too readily fall, and sadly too often has.

Image, top: Illuminated text from Lombard’s Commentary on the Psalms.
Inset: An unknown scribe’s conception of Peter Lombard –from an illuminated copy of The Sentences: Bibliotheque Municipale at Troyes MS900, fol. 1r

2 Three Bookmarks and a Bible

5 4 Considerations for Christians Wanting to Engage in Political Activism

Dear Pastor, Struggling To Grow Your Church? This May Help.

Training Preachers in the Local Church

Your Year Ahead in Books