The Reformation, as we know, unleashed human salvation from its captivity to the Church and its sacramental system. Through the relentless preaching of the evangelical Reformers and their doggedness in the face of much opposition, the gospel of justification by grace alone, through faith alone, in Christ alone became widely known in the lands of Western Europe.

Sacraments and the Search for Assurance

Sacraments and the Search for Assurance

But the dependence on the sacraments as a vehicle for grace had a distinct practical advantage, and it was this: the sacraments were a visible and tangible act that gave assurance to those who received them. If grace comes through baptism, then the baptised can know for certain that, no matter what their internal frame of mind, they had received grace.

If salvation is by faith, on the other hand, then how can I know that I have faith? How can I be certain, since what is required of me seems so subjective? This is where the doctrine of predestination, as it was expounded by Calvin and his followers, was thought to have its real power, since it removed the security for the believer’s salvation off stage and hid it in the secret counsels of God.

But the doubt remained: how do I know that I am of the elect? What are the signs that I am of the predestined, and not of the reprobate? Calvin himself had not called on Christians to an extensive self-examination, but rather turned them to Christ, the ‘mirror of our election’, as he called him. But the later Calvinists, and, in England, the group we call somewhat anachronistically by the name ‘the Puritans’, did emphasise the need for finding inward signs that one was one of the elect – the ‘true calling’.

It caused great distress and uncertainty. What would be the remedy? 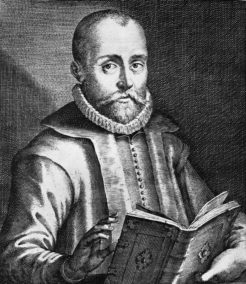 Into this pastoral confusion stepped William Perkins of Cambridge (1558-1602), the first great English systematic theologian. Perkins was the outstanding academic theologian of his generation; but was also famous as a preacher and a pastor. He regularly preached in Cambridge prison. In his day he became well known as a man of exemplary life as well as for his voluminous writings.

For Perkins, what was needed was careful instruction in the Law as much as in the Gospel, so as to ensure that a faithful Christian was in full co-operation with the divine work in making him holy. Influenced by such Continental greats as Theodore Beza, carefully outlined a theological system, which he even flowcharted. You can find this in his work The Great Chaine.

The combination of pastoral with academic concern is evident from his opening words in The Great Chaine:

Theology is a practical discipline, guiding human beings in living well. It gives to them their true purpose and uncovers their real ends.

Perkins and the Assurance Problem

Perkins and the Assurance Problem

Perkins’ remedy for the assurance problem, however, lay in his emphasis on double predestination. For him, God’s election of some human beings to eternal life and his determination to damn others precedes even his decision to create heaven and earth (a teaching called supralapsarianism). In The Golden Chaine, he spends a great deal of time outlining how a believer might cope with assaults on their assurance. The doctrine of predestination needs to be understood rightly if it is to be the great comfort to the soul that Reformed theologians were confident it would be.

But there needs to be a degree of self-examination, too. The conscience is to be our finely-trained nose so as to scent out the positive or negative signs of the Spirit’s sure work in our lives. Pastors were help the laity as their guides. Against an assault on our faith, Perkins advises two remedies:

It is interesting that the objectivity of the sacraments has a role to play, though not at all in the sense that the Roman church meant it.

Historian Patrick Collison observes that “the reader of English puritan theology might be forgiven for supposing that his salvation depended in some degree on the quality of repentance and obedience in his own life.”

Perkins and the Inward Turn

Perkins and the Inward Turn

This does not seem like the religion of free grace that Luther had preached! But, in searching for a full assurance, Perkins and others had turned to the life of the believer. This gave their work a moral zeal, and a sincere discipline, which was impressive. It made the Puritans into extraordinary citizens in many instances – vigorous nation builders of impressive stature. But it always seems like a paradox that this doctrine of grace become so rigoristic in its search for assurance.

This theological problem is not easy to untangle; and Reformed theology cannot solve these question simply by placing them in the hidden counsels of God. Neither can it produce a manner of life which is at odds with its teaching – preaching grace and then practicing law. The New Testament seems delightfully unembarrassed about calling for a different manner of life as an evidence of the reception of the grace of God in a person’s life. The warnings and encouragements of the Book of Hebrews show us two things: that the security for the believer, and thus her assurance of salvation lie in the finished work of Christ and in the hope of the future city, and that the warnings against falling away are real. Christian assurance is thus composed of a real fear of God and a real hope in God.

Michael Jensen is the Rector of St Mark’s Anglican Church, Darling Point, in Sydney. He previously taught theology and church history at Moore College for 10 years, and completed his doctorate at Oxford University, which was published as Martyrdom and Identity: The Self on Trial. He has published a number of other books, including Reformation Anglican Worship, and My God, My God – Is it possible to believe anymore? He podcasts with Megan Powell du Toit at With All Due Respect. He maintains his interest in literary fiction, Eastern European history and culture, and J.S. Bach. Michael is married to Catherine and they have four children.

3 The Hypergrace of Joseph Prince: A Review of ‘Destined to Reign’

Review: The Air We Breathe by Glen Scrivener

Are Natural Disasters the Judgment of God?

Love Across the Divide