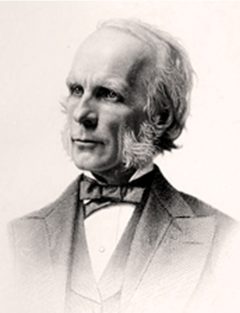 WGT Shedd is most often remembered for his teaching on the doctrine of eternal punishment. In his highly regarded Dogmatic Theology, he devoted some 56 pages to this teaching – but only 2 pages to heaven!

William Greenough Thayer Shedd (June 21, 1820 – November 17, 1894) was a Presbyterian theologian who served as Professor of Systematic Theology at Union Theological Seminary in New York for more than sixteen years. He was a representative of the flowering of Calvinist theology in the US the middle of the nineteenth century (alongside other such noteworthy theologians as Charles Hodge), and wrote as an heir to the long and rigorous tradition of Reformed scholasticism, and of Princeton’s great philosopher-theologian Jonathan Edwards.

He was writing his theology, however, in the midst of a changing world – something which is reflected in his writing. He was certainly abreast of contemporary thought. Shedd was a prodigious reader, and reflects in his work an astonishing breadth of reading in literature, philosophy and science, as well as a detailed knowledge of the many theological traditions. He was often commended for his literary style.

His treatment of hell may seem unbalanced, but it is rooted in his extensive discussion of the atonement as necessitated by the determination of God to punish sin in humankind. It was also, Shedd felt, a doctrine under attack from a more liberal Christianity in his day. The story goes that Henry Ward Beecher, the Congregationalist preacher and social reformer, was commissioned to write a response to Shedd’s chapter on hell. However, on receiving the text that Shedd had written, he telegraphed his editors to say “Shedd is too much for me. I half believe in eternal punishment now myself”.[1]

Shedd pretty much throws the theological kitchen sink at the doctrine of eternal punishment. He wheels out biblical, historical and logical arguments in succession and in depth. He is very confident that if the ground of the argument is Scripture, then his case is made. Most of the objections, he says, are speculative in nature.

For this reason, he presents what he calls a “rational” defence of hell, claiming that it is “defensible on the basis of sound ethics and pure reason.” A just God, human free will, and sin understood as voluntary action are enough in combination to make a doctrine of endless punishment rational.

In particular, he argues that:

A Heavenly Perspective on Hell

A Heavenly Perspective on Hell

That is: eternal punishment must be considered from the point of view of the heavenly and not the earthly courts. Earthly courts have to take into account the social effect and other extraneous considerations in punishing. God as judge can punish with regard only to the exact sin and its impact – he need be neither reformatory or seek to deter others, but only punish the sinner. Also, the divine court can see the full implication of each sin from conception and intention to commission, and not merely what human judges can see, which is piecemeal.

Why should hell be endless for finite creatures who committed momentary crimes? Shedd argues that “the continuous nature of guilt necessitates the endlessness of retribution”. The creature who is always guilty and never penitent cannot expect to be less deserving of punishment ten years hence then he or she is today.

Additionally, sin, though committed by finite beings, is committed against an infinite being. Shedd’s reasoning is this: to torture a cat is a crime, but we all agree that to torture a child is a far greater crime. The person who does both acts might be the same, but the different status and dignity of the object of the crime makes a difference to the seriousness of the offences. The seriousness of sin against God, says Shedd, lies with the supreme worth and dignity of God. Sin is an infinite evil.

Further, Shedd claims that the doctrine of the atonement hinges on the doctrine of endless punishment. The extraordinary measure of the eternal Son of God submitting himself to the degradation of the cross would be unnecessary for a merely finite amount of evil. The extremity of the cross demonstrates the extremity of the evil it is designed to address. As Shedd puts it, then: “The doctrine of Christ’s vicarious atonement, logically, stands or falls with that of endless punishment”.

The Need for Divine Justice

The Need for Divine Justice

Now, I tend to think Shedd’s logic is not as remorseless as he thinks it is; nor is his exegesis as unquestionable as he claims. Nevertheless, the doctrine of eternal punishment is one that today needs the kind of disciplined theological attention that Shedd gave it 130 years ago. Why? Because the nature of the justice of God is a crucial component of any theology that centres on notions of forgiveness and atonement. To explain what the nature of God’s charge against humankind is, and what its consequences are, is one of the primary tasks of any preacher or theologian or evangelist. The good news, if it is to be really good, must explain how evil is excluded from the future that God has planned for his people.

[1] This anecdote appears in Alan W. Gomes introduction to the 3rd Edition of the Dogmatic Theology

Evangelists in No Man’s Land: On Not Losing the Gospel in the Culture Wars

Ah, the culture wars. Never was so much owed by so many to so few. For every keyboard warrior who wastes a good half day on Facebook or Twitter, there...

Ten Reasons Why You Need to Belong to a Church