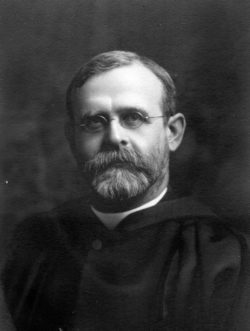 At Wycliffe Hall, Oxford, the room in which the library is housed is called the “Griffith Thomas Room.” When I was being shown around as a new student, my guide told me that he had no idea who that was. I said that I had a book on my shelf by a man called Griffith Thomas and I wondered if it was the same fellow.

William Griffith Thomas, who died in 1924, was a Welsh-English Anglican evangelical theologian who had a ministry on both sides of the Atlantic. A graduate of Christ Church, Oxford, he was principal of Wycliffe Hall from 1905–1910, and then of Wycliffe College in Toronto from 1910–1919. He was then – and this is little known – the co-founder of Dallas Theological Seminary, which is today the largest theological seminary in the world (so I understand). Griffith Thomas was also a pastor, and at various times had responsibility for St Aldate’s, Oxford, and St Paul’s, Portman Square in London.

Thomas became a Christian in 1878 as a teenager, and was encouraged by a local vicar in the Christian life. Sensing a call to the ministry, the young man headed to Oxford, and taught himself Greek by studying between the hours of 10:30pm and 2am daily for three years. As a man he was known for his “scholarly acumen, pastoral gifts, godly demeanor, and teaching talent.”[1]

Thomas published twenty-six books and many influential essays. The book for which he is best known today – and it is still being reprinted – is his The Principles of Theology, published after his death in 1930. I love this book, and I have referred to it again and again. It is an exposition of the Thirty-Nine Articles of Religion, and as such was a plucky response to other, more liberal or Anglo-Catholic works in this genre, such as EJ Bicknell’s A Theological Introduction to the Thirty-Nine Articles of the Church of England published in 1919.

Thomas was what you might call a moderate Calvinist, he did not hold to the doctrine of “Limited Atonement” and refused to assert the traditionally strong view of predestination of many Reformed theologians.

He also taught dispensational theology – a theological system more commonly associated with J. N. Darby and the Plymouth Brethren movement. Dispensationalists hold that God has related to human beings in different ways throughout a series of “dispensations,” or eras, of history. As in many things, Thomas held his dispensationalism and his premillennialism in a moderate form, without over-systematising it. He was also a teacher of the Keswick view of the spiritual life – that sanctification occurs through surrender to God, without moral effort. For these ideas he was on the end of some stinging criticism from the great Princeton theologian B. B. Warfield.

The Principles of Theology is much more than a textbook for evangelical Anglicans, though it is indispensable as that. Thomas gives an in-depth treatment of the biblical, theological and historical backgrounds to each of the articles, defending an evangelical and Reformed reading at each point.

His chapter on Article 17, “Of Predestination and Election” is a case in point. He gives the historical context of the article in detail, but moves on to a lucid biblical exploration of the theme. He recognizes the pastoral and theological problem of the doctrine – that, wrongly considered, Predestination can cause great spiritual despair. He writes:

He critiques in turn the Ecclesiastical, the Arminian, and then the “Calvinistic” view. As he says: “The Calvinistic view is an attempt to fit everything into a logical system, but the problem remains, why, if God can regenerate every sinner, He does not do it?[3]

While he shows a preference for the Calvinistic interpretation, he recognizes that it is does not lock down every possible question. There has to be room in the doctrine for the mysteriousness of the work and will of God in its relation to the will of human beings.

Thomas’s hesitation about “double predestination” (that God predestines people to hell as well as to heaven) on the basis of both exegesis and on theological and ethical grounds. In the first place, there are scant Scriptures that might be said to teach a doctrine of reprobation (predestination to hell); and indeed,

This is surely an important insight. There is not an equivalence between salvation and reprobation. If we are condemned, it is our fault entire; if we are saved, it is entirely on account of God in Christ. Otherwise, we charge God with evil, or with making human beings simply as his instruments (which would be very much ungodlike).

There is much more of value in the work of Griffith Thomas. His book is still in circulation, and justifiably so.