The voices that receive most media attention are often the loudest and most schismatic. Programs like the ABC’s Q&A often find popularity by providing oxygen to controversies so that panel discussions look more like a Saturday afternoon football match between two local rival clubs.

Yet it doesn’t have to be like that. On a cold Tuesday evening in Melbourne, a diverse crowd gathered at Mentone Baptist Church, to hear Mr Tim Wilson MHR and Rev Dr Michael Bird – speakers, who hold very different views of God and of the world – come together to talk about “Freedom of Speech in Australia.”

This issue of free speech has been a contested topic in the recent Federal election, and it is being tested across the country – most notably in the recent anti-discrimination case against the Catholic Archbishop of Tasmania, Julian Porteous.

But on this occasion there was a surprising level of agreement – despite the difference of religious opinion. Rather than a verbal gladiatorial fight, the audience witnessed two highly intelligent Australians finding substantial common ground on this topic.

Both speakers refuted popular notions of Australian secularism. Further, they defended this natural corollary of a liberal democracy, pluralism and diversity.

Tim Wilson observed that “we are not a secular society – we are a pluralist society… We are one that respects everyone’s individuality.”

Bird noted that while the presenting issue is sexuality, the underlying issue is religious freedom. Religious freedom is seen by secularists as a stumbling block to social progress, and thus needs to be put away. As they see it, religion needs to be removed from the public square and be practised quietly in private.

“I like to think our Constitution is robust enough to protect basic freedoms, and our political parties will seek to do right by all. However, people of faith can expect to receive a hard time from progressive activists and parties in the foreseeable future. Religion may be sanitised from the public square.”

Wilson believes that rather than capitulating to the secular cacophony, “we need a lived culture of open discussion.”

On the issue of a same-sex marriage he said (keeping in mind, Tim Wilson is a homosexual man who affirms SSM), “I don’t think we can have a constructive conversation around the marriage of same-sex couples until both sides can say what they truly think.” 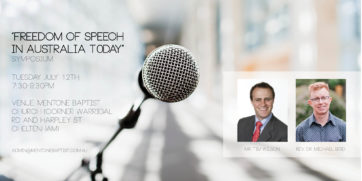 While the audience represented a broad spectrum of the local community, including various religious and political world views, there were certainly a significant number of Christians present. Both Tim Wilson and Mike Bird offered a word to Churches as they consider their place in Australian society.

Wilson spoke of the need for strong leadership among religious organisations. He rightly noted the hypocrisy of some groups who call for moral conformity in society, yet while covering their own horrendous failures, especially in relation to child sexual abuse.

Mike Bird, with his usual rhetorical flair, suggested that the future for Australian Churches will be either Swedish or Chinese. By Swedish he was referring to the Stockholm Syndrome, noting that when churches tinker with the Christian faith in order to find societal affirmation, they in fact lose their value. Instead, he encouraged Australian Christians to look to their counterparts in China, and see that it is ok to belong to the margins of a society. For Chinese Churches who have existed on the periphery, without tax exemptions and legal protections, they have nonetheless witnessed extraordinary Gospel growth.

What does it look like for Christians to speak, whether from the margins or openly in a true liberal democracy? ’Love God. Love your neighbour’, said Mike Bird.

This was an extraordinary evening, and as I’ve noted in another article, this Symposium has ‘demythologised the rhetoric of some social progressives, that civil dialogue can’t be had on issues relating to sexuality and marriage’.

Both speeches are outstanding, and I would strongly urge Christians and non Christians alike to listen to them.