The miracle of the gospel is easily disregarded. We forget who we once were and what Christ has accomplished for us. But the gospel is no small thing.

As you read of Tim and his youth group, remember the miracle that has taken place in their hearts, and rejoice. Here are those who have heard and accepted the good news of great joy, and who are, by Christ’s Spirit, bearing kingdom fruit (Mk 4:20).

Late last year, several Trinity Church youth groups from Adelaide combined to finally pull off a mission trip: eight days serving with a rural church. 18 months after their initial planned departure, Trinity Youth visited Roxby Downs Christian Community Church, a link church through Bush Church Aid. They assisted in running church services as they were able, and also organised a kids holiday program aimed at kids who have never heard about Jesus. By God’s grace, their time introduced people to Jesus for the first time, and also produced much good growth within the team members as they served and shared the gospel.

Creating Connections with the Community

When you’re a teenager without many Christian friends, suddenly encountering eleven young Christians can be a really powerful experience. Tim Blagg, one of the youth pastors who went on the trip, explains:

Zac was a local youth. Many of his mates in Roxby aren’t Christians, so it’s easy for him to feel isolated in his faith. He was so thankful that he got to spend time hanging out with a group of Christians his own age. When he later came to Adelaide, he even came to our youth group and was able to reconnect with some of the youth! While we were at Roxby, there were a few other teens who came along to the youth event we ran too, and we got to see our team of youth embracing them and hanging out together. Knowing that you’re not alone, that there are other Christians your age, that’s a real comfort. It probably also helps the bonding when you’re doing a MasterChef night, the leaders have to eat what you make, and your mystery ingredient is sauerkraut!

Knowing that you’re not alone, that there are other Christians your age, that’s a real comfort.

A lack of Christian community in a rural town doesn’t just make it difficult for developing Christian relationships—it also makes evangelism harder. Our community shapes our beliefs, which is why it can be hard to take the gospel seriously when so few in a room believe it. As Sam Chan puts it, “One of the major reasons our friends aren’t Christians is that they don’t belong to a community of friends who also believe in Jesus.”[1]

So, by running a kids holiday program, the youth group provided opportunities for families—both parents and children—to spend time in a context where Jesus was normalised and spoken positively of. The youth were able to speak about who Jesus is using Christianity Explored’s Epic Explorers material. The youth group’s actual presence in Roxby, as well as their explicit gospel-teaching, in effect suggested to locals, ‘perhaps Christianity isn’t such an alien idea after all’. Tim says:

Our partnership with the Roxby Downs Christian Community Church was all about supporting them in their mission to their local community. By God’s grace we saw families connect in who had little or no previous connection to the church. They were suddenly interested. Children were engaging too—one of our youth was absolutely stoked as she shared how one of the kids had said, ‘My parents don’t like church, but I will ask them to bring me this week.’ 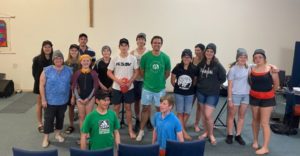 Creating Growth Among the Youth

It’s well-known that short-term mission trips often benefit the visitors far more than the people they visit. And although this trip did bear fruit with the locals, it can’t be denied that it had a positive impact among the youth too. The memory verse for the evangelistic kids’ program was Mark 10:45— “For even the Son of Man did not come to be served, but to serve and to give his life as a ransom for many” (NIV). They spoke of Jesus the Saviour, who died in their place. But it was clear they were also seeking to live out the gospel through imitating Jesus’ example:

It was incredible! So many youth stepped out of their comfort zones to love kids they’d never met before, showing genuine care and interest. Youth who hadn’t led a small group discussion at church were given opportunities to lead kids from 4-11 years old. They had conversations about who Jesus is and what he has done for them through dying on the cross. It was a true privilege to watch as teenagers lived out Jesus’ servant-heartedness for themselves, following in his footsteps.

Gospel advancement among the Roxby Downs community and the Trinity Youth make returning in the future a no-brainer:

We’re already planning to go again in 2022. We’re so thankful to God for all he did in and through the team, and it will be wonderful to see God working through this partnership between our churches for years to come.

Jacob York is a young man who has tasted and seen that the LORD is good. He grew up in and loves Drouin Presbyterian Church, is an arts and education student, and serves as President of the Christian Union at his campus, Monash University Clayton. Jacob oversees the Book Reviews Channel.