In this penultimate instalment of TGCA’s seven part series on the Image of God (see part 1, part 2, part 3, part 4, part 5), Samuel Green highlights the significance of the Jewish/Christian idea of the Image of God, for discussion with Muslims. 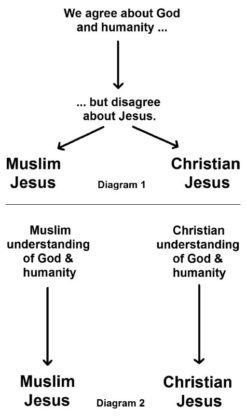 A common mistake Christians make when talking to Muslims about the divinity of Jesus is to start at Jesus. We assume that Christians and Muslims agree about God and humanity, and only differ when it comes to Christ, and so we argue about him (diagram 1). These conversations tend to go round and round.

However, Christians and Muslims have completely different concepts of God and humanity, and the relationships between them. It is these differences that lead to a different understanding of Jesus (diagram 2).

If we want to explain the divinity of Jesus to a Muslim we need to start by talking about who God is and what it means to be human. We need to address these assumptions first, then we can move to the person of Jesus. The doctrine of the image of God is one of the key doctrines that does this.

Humanity in the Bible

The doctrine of the image of God teaches that God has made a connection between humanity and himself: Humans represent God’s rule in creation (Gen. 1:26), are to display his character (Lev. 19:2, Ps. 82), and are to share in his glory (Gen. 2:9, 3:22, Ps. 8). This connection is an important foundation for the incarnation.

God made us to represent him, and display his character and glory, but these goals have been thwarted. Sin stops us achieving these things ourselves: we fail to rule as we should; we do not display God’s character; and so do not share in his glory. Yet what we have failed to do God promises he will do for us through the divine man of Daniel 7. This Son of Man will bring God’s rule, display God’s character, and share in God’s glory (Dan. 7:13-14), and he will do this for God’s people (Dan. 7:27). This is what Jesus fulfils.

Humanity in the Qur’an

However, in the Qur’an, and popular Islamic belief,[1] there is no image of God; no connection between God and humanity; and there is no plan for humanity to share in God’s glory. This means Christians and Muslims have a completely different understanding of how God relates to humanity, what humanity is, and what God’s plans for humanity are. This is why the incarnation is illogical to a Muslim, but logical – yet still amazing – to a Christian.

Therefore, the image of God is an important doctrine to discuss with Muslims, and to come to some sort of agreement before you discuss the person of Jesus.

But why should a Muslim believe this doctrine? Why should you believe it and not follow Muhammad instead? 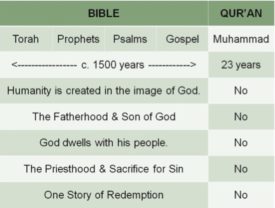 Some possible points of discussion:

Samuel Green is married to Anne-Petra and they have five children. He became a Christian while at university and has been involved in various Christian ministries. Since 1999 he has worked with the Australian Fellowship of Evangelical Students (AFES) as a campus evangelist and Islamic Engagement Director. He is also the Anglican Interfaith Chaplain. Engaging with Islam is one of Samuel’s main interests and he does this through research, writing, training, evangelism, lectures and debates. He is one of the founding authors of the Answering Islam website and the author of Engaging with Islam.

[1] There is a Sunni hadith (record of Muhammad’s life and teaching) about Adam being made in Allah’s image 30 meters tall, but this hadith seems to have little theological impact for popular Islam.

Samuel Green is married and has five adult children. He became a Christian while at university and has been involved in various Christian ministries. Since 1999 he has worked with the Australian Fellowship of Evangelical Students (AFES) as a campus evangelist and Islamic Engagement Director. He is one of the founding authors of the Answering Islam website and the Anglican Interfaith Chaplain. Engaging with Islam is one of Samuel’s main interests and he does this through writing, training, evangelism, lectures and debates. He is the author of Where to start with Islam. Samuel has degrees in theology and chemical engineering.