2021 was a rich reading year for me, across many genres. If you’ll indulge me, here are some brief highlights from the year that was.

The Baptized Body by Peter Leithart was highly thought-provoking. Leithart is like the theologian Barth: even when he’s wrong, he’s still saying something important. Echoes of Exodus by Andrew Wilson and Alistair Roberts exemplifies the sort of faithful, creative, and rich reading of scripture I want more of. Rules for Reformers was peak Doug Wilson—pungent, adversarial, stimulating. And Fleming Rutledge’s The Crucifixion: Understanding the Death of Jesus was a searching, scholarly, and pastorally astute treatment of the cross. It is, I believe, the first comparably major treatment of the topic, in the English language, since Stott’s The Cross of Christ in 1986. 1986! Let that sink in for a moment.

On the leadership front, Failure of Nerve, by Edwin Friedman; Jenny Brown’s Growing Yourself Up; and The Leader’s Journey, by Jim Herrington, Trisha Taylor, and R. Robert Creech were all fruitful reads. Each draws on the Bowen Family Systems theory, which has many useful applications to congregational life.

Some books on burnout and sustainable service were also a feature this year. Going the Distance by Peter Brain is solid. It’s dependent on a few older sources but enriched by the author’s own experience in pastoral ministry. Set Boundaries, Find Peace by Nedra Glover Tawwab approaches the topic from a less gospel-shaped orientation. It contains wisdom for the discerning, but it needed to be discerned—not digested indiscriminately. Emotionally Healthy Leadership, by Peter Scazzero, and Carey Nieuwhof’s Didn’t See it Coming were two other worthwhile titles. 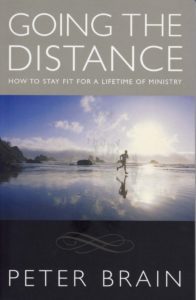 Al Stewart’s forthcoming book The Manual can be recommended as a sure-footed guide to healthy, flourishing masculinity. Excellent. Jordan Peterson’s 12 Rules for Life stood up to a second read. And Rest: Why You Get More Done When You Work Less by Alex Soojung-Kim Pang was also worthwhile.

Church and Ministry
I found Scot McKnight’s A Church Called Tov a helpful guide to scripture on the topic of toxic leadership. As an aside, I did question why ‘toxic’ was the chosen word. Why not a word more tethered to the biblical vocabulary, such as ‘evil’ or ‘wicked’? Working the Angles: The Shape of Pastoral Integrity, by Eugene Peterson was a good read on pastoral ministry. Occasionally a remark jolted me into recalling our differing contexts. At one point he speaks of the respectability and “considerable prestige” attached to being a pastor. Perhaps an issue in the USA in the 1980s? But in 2021 Australia I can safely say prestige is not a temptation pastoral ministry throws at you. Adam Ramsey’s Truth on Fire reminded me why I entered pastoral ministry in the first place.

I also read Carl Trueman’s much acclaimed The Rise and Triumph of the Modern Self. It is a good one-stop-shop to grasping the rise of what Taylor calls “expressive individualism” in the “age of authenticity”. Like most books written in academic contexts, it runs out of puff in its concluding ‘how shall we now live?’ chapters. Nevertheless, it serves as an excellent primer to modernity in its current manifestation.

Adam Ramsey’s Truth on Fire reminded me why I entered pastoral ministry in the first place.

Fiction
Graham Green’s theologically rich story of the “whisky priest”, The Power and the Glory, was the highlight of my fiction reading in 2021. The Road, by Cormac McCarthy was haunting and also theologically suggestive. Christos Tsiolkas authors Damascus, writing an earthy, gritty, and not-for-the-faint-hearted account of the apostle Paul and early Christianity. C. S. Lewis’s science fiction trilogy, Out of the Silent Planet, Perelandra, and That Hideous Strength also got a run in 2021. It was my final frontier into Lewis’s works. It might now be my favourite of his fiction. Certainly it deserves to stand alongside Orwell’s 1984 and Huxley’s Brave New World as a classic of mid-twentieth century dystopian fiction. Indeed, to my mind it snatches the gold, relegating Orwell and Huxley to the silver and the bronze. Rereading the Narnia series to my youngest completed a good year in Lewis. Anyone scratching around for a new book idea should consider authoring ‘Leadership Lessons from Narnia’. With figures like King Lune and Uncle Andrew, it’s strange that this book doesn’t already exist.

Piccadilly Jim, by Wodehouse, wins Best Audiobook, while Edie Richter is Not Alone, by Rebecca Handler, receives Best First Novel. Revisiting Kenneth Grahame’s Wind in the Willows was a guilty pleasure. It is Englishness distilled, bottled, and served with lashings of ham, stilton cheese, and Branston’s pickles.

Paul Kelly’s selection of favourite poems in Love is Strong as Death supplied most of the year’s poetry. An introduction to Christian Wiman is an eternal debt I now owe a friend. And revisiting some of Andrew Landsdown’s poetry was a joy.

Barack Obama’s A Promised Land delivered on the exact question I go into every presidential and prime-ministerial biography wanting answered: what is the job actually like? Fascinating. Monash: The Outsider Who Won A War, by Roland Perry was absorbing, as was Baden Stace’s Ph.D. on the preaching ministry of evangelist John Chapman.

A Short History of Australia by Geoffrey Blainey was worth rereading. And Geoffrey Bolton’s Land of Vision and Mirage filled in some gaps in my knowledge of the history of my own state, Western Australia.

Christopher Watkin’s biographical work Gilles Deleuze introduced me to the important French thinker. Cultural Amnesia was a book I returned to in 2021, while Angels in the Architecture, by Wilson and Jones, was surprisingly absorbing. A final book I read this year was Roger Scruton’s Beauty: A Short Guide. In my humble opinion, there’s some very low-hanging evangelistic fruit available to anyone who can articulate a Christian account of beauty to secular Australia. Our celebration of ugliness will surely be among the first things that strike future historians.

That’s the year that was. Happy reading!

Rory Shiner studied Arts at the University of Western Australia and theology at Moore College in Sydney. His PhD is on the life and work of Donald Robinson. He is senior pastor of Providence City Church in Perth, where he lives with his wife, Susan, and their four boys. He has written books on Union with Christ and on the relationship between Jesus’ resurrection and our own.