The Israel Folau saga is reaching new levels of the ridiculous.

It now seems as though it’s an enormous issue for Maria Folau to support her husband publicly.

Maria Folau is a star of International netball, representing New Zealand and playing for the Adelaide Thunderbirds.

What did she say that was so terrible and controversial? She wrote a single word on her Instagram account, “Support”, along with reposting her husband’s statement where he explained why he was pursuing legal action and how people could support the costs, should they wish to do so. 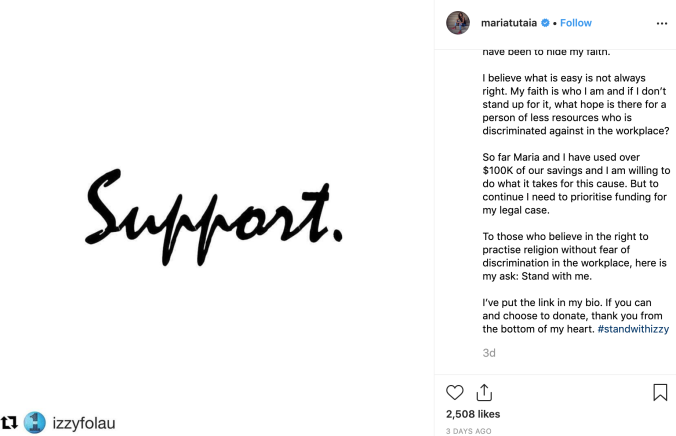 Netball Australia and Netball S.A. preempted the coming tsunami by releasing a statement in support of Maria Folau. They made it clear that they were not agreeing with Israel Folau’s views, but also that Maria had not breached any rules.

It is important to quote the following statement in full:

First and foremost, I want to be very clear that Netball South Australia is fiercely determined to provide an inclusive environment that allows anyone to participate in the great game of netball regardless of gender, religious belief, age, race or sexual orientation.

We also believe in fairness and perspective.

Like millions of other people across Australia, Maria Folau uses her personal social media platform to share her life and beliefs with her family, friends, and fans. This week, she shared her husband’s controversial Go-Fund-Me post.

While Netball SA in no way endorses the reposting, we do not believe Maria has contravened our social media policy.

Maria is a key member of the Thunderbirds. Not only has she provided great strength and leadership on court, she attends and works with netballing clinics, spends a lot of time with fans, engages with local communities and passionately encourages young kids with their netball dreams. We continue to support her as we support all our players.

To the thousands of people that play netball across South Australia every week:

Netball SA is committed to diversity and inclusion.

Netball SA and the Adelaide Thunderbirds support and encourage everyone wanting to play this great game.

And finally, we want to get out on that court today, play a great game of netball and win this game.

My daughter plays netball.  I for one appreciate this public statement. Australian netball has acted wisely and impartially, taking what only a few years ago would have been considered a sensible and reasonable course. But of course, we no longer live in such a culture.

“Yeah nah not good enough. How about this: There is no room for homophobia in our game. Anyone who is seen to support or endorse homophobia is not welcome.”

We are left wondering, what would Liz Ellis like to see happen? Does she believe that Maria Folau should be sanctioned or suspended? Does Ellis expect Netball Australia and the Adelaide Thunderbirds to publicly denounce Maria Folau for supporting her husband? Is this what family members should expect in the future?

What would Liz Ellis like to see happen? Does she expect Netball Australia and the Adelaide Thunderbirds to publicly denounce Maria Folau for supporting her husband? Is this what family members should expect in the future?

Once again, a lot hangs on the interpretation of Israel Folau’s original comments. Liz Ellis is among those who assume it is “homophobia”. Let the reader understand, under this assumed language (which is never defined or articulated), the Bible and Christianity would be defined as “homophobic”, for Israel Folau was simply paraphrasing parts of the Bible. Indeed, thousands of sermons in normal Christian churches throughout Australia would fall under this category every month, even though none of the preachers or congregations are fearful of or hateful toward people who identify as homosexual. Indeed, they welcome and are close friends with people who identify across the sexuality spectrum. Sometimes we forget, Churches are not communities for the self-righteous but for sinners, as Jesus himself put it.

In the moral blitzkrieg sweeping Australia, the Apostle Paul would find himself tarred and feathered. John the Baptist? We know what happened to him when he challenged the marriage of Herod! And Jesus? I can already hear the Aussie crowd yelling out, “crucify him, crucify him”.

That’s the problem. There used to be an ethical category called loving disagreement which was employed regularly by Jesus Christ, the Apostles and by most Christians ever since (granted that Christians have sometimes failed in this regard).  This was about presenting an alternate position not because you thought less of another person or because you carried a dislike for them, and neither was the problem one of ignorance. Rather, out of concern that they were exercising a lifestyle that you believe is harmful or disadvantageous to their spiritual or social wellbeing. Indeed this ethical framework can still be found in use today in some quarters of society, for example among friends or with parents explaining to a child that their choices are not particularly good or helpful.

Loving disagreement has largely been bullied out of the public square, but others have at least wanted to hold onto civil disagreement, but even this is too much for the authoritarian secularists who wish to use sexuality as a weapon against religious thought and speech.

Liz Ellis’ comment, which has been retweeted and quoted thousands of times since Sunday afternoon, reinforces the narrow but now mainstream view that only certain religious beliefs should be freely expressed in the public space. Such beliefs are no longer defined by religious institutions or by a sacred book, but by self-appointed moral elitists who insist that all society conforms to the rigid sexual ethic that they have created. This is problematic because their grid is constantly changing and being redefined according to how many letters need adding, and even then we are now discovering that L and T have turned in on each other. Lesbians are now finding themselves being chewed and spat out of organisations because they find problematic men who identify as women. One of tennis’ all-time great players, Martina Navratilova, was sacked earlier in the year from her role as ambassador to an LGBT group for raising concerns about this issue.

Netball Australia has suggested a return to the centre, to at least try and resurrect the notion of civil disagreement. Well done to Netball for exposing Rugby Australia’s overreach, and for modelling to Australians are sensible and reasonable course. It reminds of the stance the Carlton Football Club took during the marriage plebiscite. They issued a statement in which they said:

“As a Club, we respect that this is about personal choice, and as such don’t intend to campaign on the issue, but we do strongly reinforce our Club’s absolute commitment to equality – and a community that is free from any form of discrimination.”

The response was instant and vitriolic.

It will be interesting to see what further backlash will come upon Netball Australia because of the stance they have made. We hope their example will encourage other sporting codes and organisations to also stand for fairness and neutrality, but one suspects a whistle has already been purchased from Sportsmart and self-appointed referees are about to blow that whistle, shouting about a court violation, and sending Netball into the magistrate’s office for re-education.