In July of this year the ABC’s Four Corners programme broadcast an investigation into the treatment of young people in the Northern Territory’s Don Dale Detention Centre. It was ugly. Footage of naked children being assaulted and humiliated by guards were sickening. Such obviously degrading treatment of another human being. Such a broken power relationship. How is this even possible? A clear failure of the justice system was evident. A royal commission has now been called, and a government effectively sacked by the electorate.  When the commission hands down its findings, we will have a better idea of how this was all able to happen.

Intuitively, what we saw offended our sense of justice. But, to quote Alasdair MacIntyre’s question, ‘whose justice?’ By whose account of justice are we making these judgements? Was it simply unfair? Or do we think that, in addition to what might be ‘fair’ there should also be mercy? Compassion? Is the process of justice finished when punishment is dealt, or, under the conditions of the gospel of Jesus Christ, are we lead to pursue a justice that includes and works toward restoration? And, if we long for restoration, what does that process look like? What of the victims of the crimes for which the detained are detained? What of the guards and the system in which they operate? What about the wider community within and beyond the detention centre? What would restoration look like in that wider context?

Australian theologian Geoff Broughton’s new book Restorative Christ: Jesus, Justice, and Discipleship is a sustained theological exploration of how Jesus might inform and shape our vision of justice. In it, Broughton argues for a particular and theologically-shaped theory and practice of a justice which looks beyond retribution and to restoration—the restoration of victims, perpetrators and communities. It is a very good book. 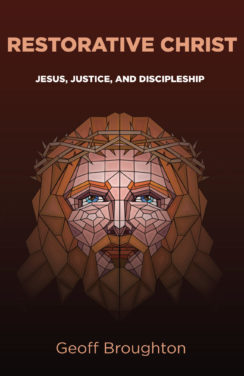 As Broughton maps the terrain, there are more traditional accounts of justice, with a strong sense of blame and retribution. And there are modern, therapeutic accounts that dissolve any sense of human agency into a accounts in which true moral responsibility vanishes altogether. Into this map, Broughton asks the question: “What vision of justice does Jesus offer?” His answer is that Jesus offers us a restorative justice.

The book is creatively written. Each chapter contains a “street view”—a story of the complexities and hope of restorative justice from the experience of ministry in inner-city Sydney. This is followed by a meditation on a relevant “core-sample” of scripture, an interaction with a significant theologian (Marshall, Yoder, Bonhoeffer and Volf) and a final section in which the implications for discipleship are teased out. This structure can sometimes give the book an uneven feel, moving suddenly from the highly readable and engaging “street views” to some reasonably dense exegetical and theological sections. Like many other books that come out of doctorial research, this one has a fair bit of horse-power under the bonnet, and one can occasionally feel the chassis shaking as a result. But the movement between the street views and these other sections are the book’s great gift, forcing the reader to move beyond the academic discussion to its real world implications.

Broughton writes as someone in sympathy with the radical discipleship tradition. As such, his theological critique is all the more searching. He does not flinch, for example, from meditation on how the theologian of non-violence, John Howard Yoder’s own deep moral failings implicate the way we read and assess his work. He also argues that Yoder’s aversion to a substitutionary account of Christ’s death on the cross is both theologically unsustainable and counterproductive, undermining not only biblical truth, but also robbing us of a deeper grasp of the radical justice found in the cross.

In an earlier exploration of the story of the prodigal son, Broughton rejects simplistic accounts that the father’s forgiveness doesn’t involve any atonement or questions of punishment: “It is manifestly wrong to interpret the parable as a story of forgiveness-without-atonement”. (page 48) The father’s act of forgiveness was costly—the point is that he bore the cost.

For those of us who, despite huge practical sympathies with the radical discipleship traditions, are troubled by the short shrift sometimes given to the substitutionary and atoning work of Christ on the cross, Broughton’s work is very helpful.

An Anglican minister, Broughton concludes the book with an outline of how the Anglican Church of Australian could pursue reconciliation with Australia’s indigenous people. Many of the suggestions could be applied beyond the Anglican church and to the local church level, whatever that church’s denominational affiliation.

I am still digesting this book. It is richly researched, deeply engaged with scripture and with theology, and often moving, especially with the stories of restorative justice at the street level. I will read it again in order to ponder the theological thesis and its implications. Broughton’s theological account of what restorative justice looks in practice is very attractive. In light of what we have seen in recent days coming from the Don Dale Detention Centre, it also seems urgent.