Next week, Garratt publishing will be launching Science and Christianity: Understanding the Conflict Myth by Chris Mulherin (former locum vicar at St Jude’s Carlton, philosophy lecturer and current Executive Director of ISCAST—Christians in Science and Technology). We asked Chris to tell us a bit about his forthcoming book and the thinking that went into writing it.

TGCA: First, tell us a bit about your background and what led you to write Science and Christianity?

I’m a jack of all trades: I studied and taught engineering before moving on to philosophy of science, largely motivated by my interest, as a Christian, in the relationship between science and faith. A call to full time ministry led to a 13-year stint in northwest Argentina working with the IFES and the local Anglican church. But all along the way, my apologetic inclinations have led me to making connections between science and faith. So, when we arrived back in Australia, I did a doctorate in theology exploring the similarities between scientific and theological knowledge claims. However, doctorates don’t get read by the person in the street and my concern is with helping Christians and people outside the church to be comfortable with science and faith. As we say in ISCAST, the science/faith conversation is at the cutting edge of Christian engagement in an increasingly secular and scientific culture.

My concern is with helping Christians and people outside the church to be comfortable with science and faith. The science/faith conversation is at the cutting edge of Christian engagement. 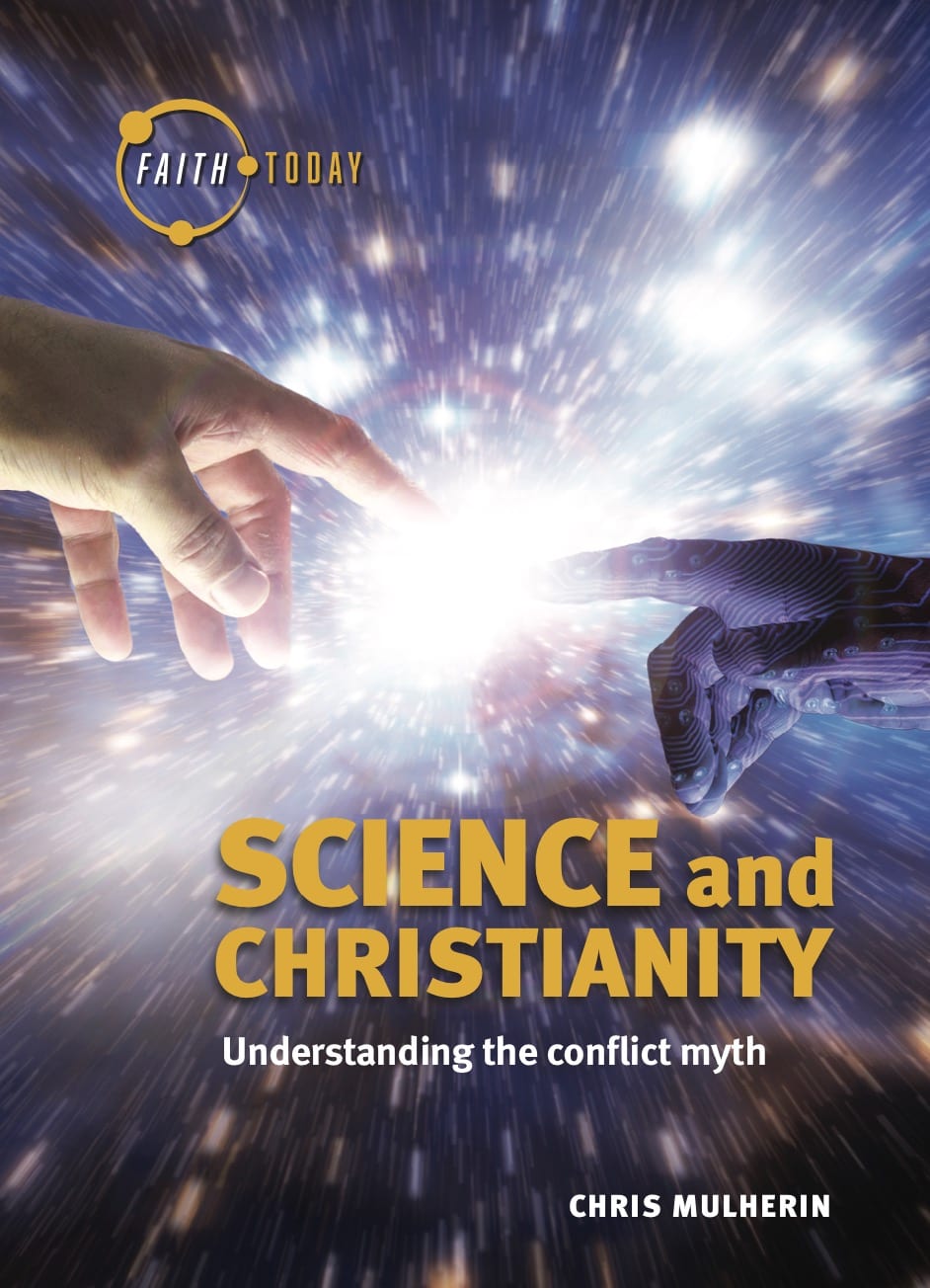 TGCA: Some people will be surprised to see an evangelical Anglican publishing through a mostly Catholic press. Is that just an accident of circumstance, or is it an expression of a strategic conviction?

Garratt is a solid Australian publisher, so when they asked me if I would write the book I said yes. As an introduction to the relationship between science and Christian faith, my hope is that the book will be really useful for a range of people, including upper secondary students. So this is an opportunity to publish with a company that has wide access to the national Catholic schools network. In other church/Christian schools, I hope chaplains and RE teachers will pick it up.

TGCA: How acute is the need for a book like this? Some apologists depict New Atheism and its science-only dogma as the last gasp of a spent worldview.

At the serious philosophical level, it’s probably true that the New Atheist wave is over, and its position that science is the only source of truth is largely discredited. But at the level of the person in the street or the university, it is still so common to hear people say “I believe in science, so I couldn’t be religious.” So we need to give people a basic understanding of how science and faith relate to one another. And I’m talking about two groups of people: those who think science rules out faith, but also those in the churches who live with that uneasy feeling that taking science seriously would threaten serious Christian faith.

TGCA: This is a very accessible and well-presented book—as I read through, I was reminded of the old Lion handbooks. Who have you written it for?

As I said, the book is deliberately written to be easy to read by busy people with no background in science or philosophy of science. I really hope that includes church leaders; so many people say to me that they have never heard science dealt with adequately from the pulpit.

It’s also designed for use in a variety of group settings: schools I have mentioned, but also in youth and other church groups. So, it has short sections and it has questions for discussion. But it also has resources for further reading to take people further.

TGCA: I particularly enjoyed the boxed “Article” sections, which showcase scientists, scientific discoveries and even quotes from theologians. Were there any of these that stood out for you as you wrote them?

A couple come to mind. One is the Galileo controversy, which is perhaps the most famous so-called science/faith conflict. However it is grossly misunderstood. Firstly, Galileo wasn’t tortured, imprisoned or burnt at the stake. Secondly, much of the issue had to do with his difficult personality and church politics at the time. And, as well, the church had good scientific reasons for rejecting his views, even though they turned out to be correct. So it is not really a story of science versus Christianity.

Another issue that springs to mind is climate change. I like to use climate change as an example of science at work. (I teach in “Intro to Climate Change” at Melbourne Uni.) Climate science shows how naïve it is to expect some sort of absolute proof of the claims of science. That’s not how science works. Science is about the considered convictions of the experts in the field. And when you describe science in that way, you start to hear the similarities between the way we come to convictions in science and the way we come to our faith convictions. “Jesus is Lord” and “Humans are causing dangerous planetary warming” are both faith statements; we make them believing them to be true for good (but different) reasons. And we commit to the truth of those beliefs. But we can’t prove either of them to the sceptic.

TGCA: Were there any other surprises for you in the research and writing process?

Even a short easy-to-read book takes time and energy amidst a full-on life!

TGCA: Some readers will disagree with your non-literal reading of Genesis 1. Should they steer away from this book?

That’s a difficult question for more than one reason.

Firstly, I know what you mean by “literal” but I would want to tease that out by talking about the nature of Scriptural interpretation. After all, we don’t interpret much of the Bible “literally” in that sense: We don’t think Jesus is a literal door, nor that the sun literally “rises”.

Secondly, the book does talk about such things and I would hope that those who think they might disagree will be encouraged by the book anyway.

TGCA: One of the biggest theological problems for me vis-a-vis theistic evolution is the fact that it involves God achieving his goals through vast amounts of innocent animal suffering. How do you think about that problem yourself?

It is difficult; there’s no doubt about that. But to pretend that there is one non-problematic answer to these questions is naïve. There’s so much we simply don’t know about the mechanisms and ways of God. The perspicuity of Scripture assures us that the big picture of God’s creation and salvation plan is clear. But Scripture does not give us a lesson in where exactly the hand of God is seen in the world that science reveals. However, one thing is clear and should have been ever since Aristotle outlined his four causes almost 2500 years ago: there are different but valid explanations that may not be obviously discernible. There is more than one cause of the water boiling (see the book): it is boiling because of the heat exciting the molecules, but it is also boiling because I want a cup of tea.

Back to your question: animal suffering. I dislike animal suffering and I think our responsibility as humans is to eliminate and not participate in inflicting unnecessary suffering. However, philosophically/theologically, the relationship between suffering and evil is not clear cut. You can’t simply say “Premise 1: all suffering is evil. Premise 2: evil is a result of the fall. Conclusion: there was no suffering before the fall.” Both premises need investigation. The first isn’t obviously true; for example, responsible parents deliberately inflict (hopefully very limited!) suffering on their children when they discipline them. And the second premise is sound biblical doctrine but does raise questions about God and time: we live in a time-bound history but orthodox theology says that God is outside of time.

I am not saying I have a clear view … only that the question is not as simple as it seems and that no view is non-problematic.

And of course, when speaking of animal suffering we are really pointing to what I think is the hardest question of all for a Christian: the problem of evil, something I deal with in my teaching, but not something to get into here!

TGCA: Coming at it from the other side, I imagine that many in the evolutionary psychology camp would take issue with your claim that science can’t help us understand things like meaning and morality. They would say that these things simply arise from the instincts evolution has given us. Are they wrong about that?

Yes, it may be possible for someone to propose a theory about how evolution can give us a sense of meaning and morality. Why altruism might be selectively beneficial et cetera … But there is a difference between an internal sense of morality and actually being subject to an objective morality that impinges on us from outside. It’s the old fact–value distinction: the fact that we have a sense of morality does not lead to the conclusion that we live in a moral universe.

There is a difference between an internal sense of morality and actually being subject to an objective morality that impinges on us from outside. The fact that you or I or even the majority of people have a sense that torturing the innocent is wrong does not mean that it is really wrong

For example, the fact that you or I or even the majority of people have a sense that torturing the innocent is wrong does not mean that in reality, in some sort of objective way, torturing the innocent is really wrong. Our senses don’t always line up with reality. Hypothetically, say we could convincingly show that evolution has resulted in humans believing that it’s morally right to euthanise the elderly. That doesn’t prove that it is right. It’s another way of saying that not everything that is natural is good.

In other words, for the person desperate to explain morality and meaning without God, they can come up with a so-called scientific story as an explanation. But that still doesn’t answer the question of whether there is any transcendent meaning or purpose beyond the firings of our neurones and the apparent randomness of quantum physics.

TGCA: Throughout the book you draw a sharp line between science and Christianity: science is not (or shouldn’t be) a worldview and biblical Christianity shouldn’t be confused with science. Are there places where that line is a bit fuzzy? I’m thinking, as I ask the question, about how Georges Lemaître’s Big Bang theory was initially canned as an attempt to smuggle religion into physics.

The book is an introduction to the topic. So Stephen Jay Gould’s NOMA idea of Non-overlapping Magisteria is a good starting understanding of the relationship between science and faith. In other words, to a first approximation, science deals with particles and mechanisms, Christianity deals with purposes and meanings. But, of course, it is more complicated than that and, you are right, there is no very sharp demarcation. However, there are some things that can be said fairly clearly that clarify the relationship and I hope the book does that.

TGCA: What is one big thing you are hoping this book will achieve?

I hope it contributes to overcoming the destructive idea that committed Christian faith is at war with the best of human endeavours to understand God’s creation. Science and faith can get along and, in fact, God is glorified in that harmony.

TGCA: When and where can people get hold of Science and Christianity: Understanding the Conflict Myth?

Well, depending on when this is published, they could come to the book launch in Melbourne on November 7th. It’s free, convivial and the books will be cheap. Details are on the ISCAST website at ISCAST.org. You can also buy the book through the site.