Only Jesus brings true liberty and truly sets us free from oppression; only Jesus civilises our selfish inclinations by his Spirit.

In his book “The Three Languages of Politics: Talking Across the Political Divide”, author Arnold Kling argues that political debate is framed around three dominant axes: oppressor-oppressed, civilisation-barbarism, and liberty-coercion. Understanding the way different views are framed is a helpful first step towards dialogue. Kling suggests we should do our best to ‘hear what people are saying,’ and speak to the real fears and concerns that lie behind divisive issues. 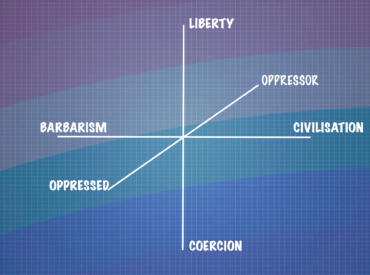 Typically, left or progressive voters see most social and political issues as a fight for freedom from oppression. Right-leaning conservatives, on the other hand, are fearfully defending what they see as the hard won gains of civilisation and social order.  So, when it comes to the same-sex marriage debate, it’s not surprising that political and moral conservatives argue that marriage and family are foundational building blocks for civilisation. Attacks on marriage are ‘de-civilising,’ and should be opposed. Some (like commentator Andrew Bolt) argue from a conservative political framework, while others will be concerned for gospel issues, or a wider theological mandate, or a concern for loss of future religious freedoms.

Naturally, if you’ve experienced harsh treatment  because of your own same sex attraction, or you’ve been concerned at the way others have been treated, you’d probably find it easy to view the “Marriage Equality Debate” through the lens of the ‘oppressor-oppressed’ narrative. For too long, you’ll argue, minority religious views of marriage have been oppressively applied to non-religious people. Why can’t same sex couples be treated equally under the law, rather than unfairly limited? After all, “marriage is a basic human right.”

Thirdly, (and it’s big in Australian thinking)  there’s the liberty-coercion axis.  Maybe you look at the Marriage debate and say, “Why should government interfere with peoples’ private lives anyway? Why not let people do what they want when it comes to marriage if they love one another.” If you view the marriage debate this way, you will either choose not to vote (out of disinterest) or vote to redefine marriage because on the surface the ‘marriage equality’ case seems to be arguing for greater freedom. Ultimately, though, there may not be as much freedom as you think.

As we approach the Same Sex Marriage Plebiscite, I want to acknowledge that there’s some merit in almost all the views described above. We live in a complex world where  goals of liberty versus equality, justice versus mercy, and tolerance versus order are often in conflict. Sometimes my freedom comes at the cost of your oppression, and I’m not even aware of it. At a time like this, conservative minded Christians can be over-reactive, lose our cool, and play to the stereotypes that we’re often accused of. In doing that, we forget our primary purpose of graciously proclaiming the hope that we have in Christ. Worse, we can divide over side issues and strategies; friendships can be lost, and churches split – even when there’s basic agreement on core issues.

With all that in mind, I want to lay out a number of points I think are relevant to the debate. You’ll probably agree with some of them, and question others.  Let’s at least try to take part in the debate with a degree of understanding, and an acknowledgment of the complexity of the issues.

Life is complex, Christianity is no longer in a position of political power, and we’re no longer considered the moral chaplains of our culture. In fact, the failure of denominational institutions to protect vulnerable kids has left our moral credentials in tatters. We’ve often lacked grace as we’ve approached difficult social issues, and been overly critical.  We need to be humble enough to acknowledge and repent of the times when we haven’t shown grace in the past, and seek to do better in all kinds of ways in the future.

On the other hand, there are clearly some who are determined to destroy Judeo-Christian influence however they can. Deconstructing marriage and family life is a great place to start – the marriage equality issue is just a small step towards  a much bigger agenda.

As Christians, we need to remember we have a bigger agenda too. Our goal is not to ‘bring about civilisation,’ but to bring about heart transformation, one heart at a time, as people hear the good news of Jesus, turn from their rebellion against God, and find new life. It’s hard to believe that anyone is listening, because it’s a message that goes against the flow. But let’s keep our hearts and minds on that bigger gospel agenda in all we say and do over these coming troubled months—because ultimately there’s only one who brings true liberty; one who truly sets us free from oppression; one who truly civilises our selfish inclinations by his Spirit.  No matter what side of the political spectrum you’re on, as a follower of Jesus you’ll recognise our only hope is in Him, through the promise of the gospel that together we proclaim.

Images: unsplash.com
In accordance with s 6(5) of the ‘Marriage Law Survey (Additional Safeguards) Act 2017,’ this communication was authorised by Phil Campbell, of Brisbane, Queensland.