We commit ourselves once again to the worship of our triune God and the glad-hearted declaration of this gospel. 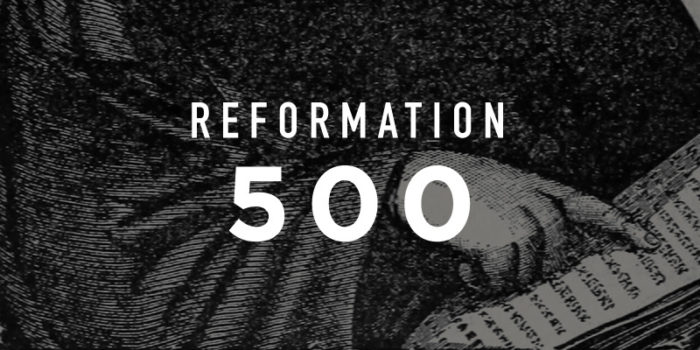 Today we join with millions of Christians around the world in celebrating the 500th anniversary of the Reformation.

Granted, dates like these are hard to pin down. Who is to say when something as big as the Reformation began? And what about those who laboured for reform long before October 31, 1517? Nevertheless, for centuries, Protestants have instinctively recognised that a providential series of events was set in motion on this day 500 years ago when a German professor named Martin Luther nailed his Ninety-five Theses to the door of the Castle Church in Wittenberg.

We give thanks for Martin Luther, imperfect though he was, for the role he played in igniting a reform movement that caught fire in the cities of the Holy Roman Empire, spread through the rest of Europe, and now reaches to the ends of the earth. Wherever we find the Scriptures alone as the highest and final authority, grace alone as the only hope for sinners, faith alone as the only ground for justification, Christ alone as the only atoning sacrifice for sin, and God alone as the ultimate object of our worship—wherever we find these truths sung, savoured, and celebrated, we have reason to rejoice in the Reformation.

But we do more on this day than give thanks for the past. We also marvel at what we see in the present. Who but God could have foreseen the triumphs of the gospel in the last 500 years—from the planting of Reformation churches in the New World, to the explosion of Christianity in sub-Saharan Africa, to revivals in Korea, to the endurance (and now spectacular growth) of the church in China, to renewed gospel vibrancy in places as diverse as Australia, the Arabian Peninsula, Brazil, and India? Who but God could have known that once the Bible was translated into English and German and French it would also be translated into Albanian, Cambodian, Japanese, Oshindonga, Navajo, Swahili, and Pitjantjatjara? Who but God could have predicted that with the advent of planes, radios, and the internet, the good news of justification by faith alone in Christ alone through grace alone would be available to more people in more places than at any previous time in history? This is the Lord’s doing, and it is marvellous in our eyes (Ps. 118:23).

Who but God could have predicted that with the advent of planes, radios, and the internet, the good news of justification by faith alone in Christ alone through grace alone would be available to more people in more places than at any previous time in history?

And yet, we are not blind to the challenges facing the church: secularisation in the former countries of Christendom, opposition to biblical orthodoxy in the West, and increasing violence against the church in parts of the Middle East, North Africa, and South Asia. Theological heterodoxy holds sway in too many places, as do grinding poverty (on the one hand) and affluent indifference (on the other). And this is to say nothing of rising racial tensions, widespread nominalism, and the plight of those—numbering in the billions—who have no access to the gospel.

But Scripture tells us that the Word of God is not bound (2 Tim. 2:9). What we know from the Bible and have seen in history—that the gospel is the power of God unto salvation (Rom. 1:16)—we expect to see in the years ahead. We are not confident in ourselves or in our ministries. We are but a vapour, a mist that appears and then vanishes away (James 4:14). We will not change the world, or even a single human heart, but we know the One who can and does. The God who Luther proclaimed is the God of Abraham, Isaac, and Jacob, and our God too. Though cultures change, and the church with it at times, the Head of the church does not change. He is the same, yesterday, today, and forever (Heb. 13:8).

And so on this momentous day when we celebrate the rediscovery of the gospel and the recovery of true worship, we commit ourselves once again to the worship of our triune God and the glad-hearted declaration of this gospel. And if the Lord should tarry another half millennium, our prayer is not to be remembered as Luther is, but only to be an instrument in the Lord’s hands as he was.

The grass withers and the flowers fade, but the word of our God will stand forever (Isa. 40:8).