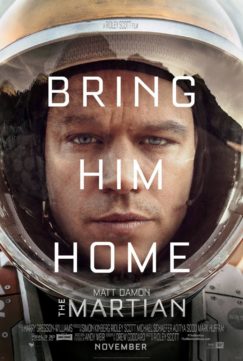 The Martian (2015, directed by Ridley Scott) is the genre-hybrid hard sci-fi, castaway, comedy, survival procedural blockbuster starring Matt Damon. Damon plays astronaut-botanist Mark Watney who is left behind on Mars by his crew, presumed dead. Even if he can get a message back to Earth it will take 3 years for a rescue ship to reach him. And so he realises that in order to survive, he will have to ‘science the s^$%‘ out of his circumstances.

It’s hard to not compare The Martian to two other excellent science fiction films of the last two years: Graivity (2013) and Interstellar (2014). All share visual and technical brilliance, intense drama and indirect global warming themes as they wrestle with humanity’s vulnerability in the universe and our capacity to survive. The Martian shares something of the raw physicality of Gravity, and also matches the intellect and spirit of Insterstellar. What it makes it unique is its irreverent humour — so crucial to the likeability of Damon’s character, but also wonderfully humanising of the NASA scientists working to engineer his rescue.

The Martian stands out despite a plot skeleton that could be called predictable. It is easy watching, without patronising the audience – the science is detailed under the bonnet. It is very human, without depending upon romantic interest or families ties, for we can have tender concern for a single man without him being a lover or a father. It somehow presents us with the other-worldliness of Mars, while showing that its landscape is worldly in its own way — another planet in the same universe as Earth. It is exciting without relying on graphic sex or violence to deliver the thrills which, along with its restrained obscenity vocabulary, makes it potentially family friendly for older-primary aged kids.

Most of all, The Martian is a wonderful celebration of humanity — our ingenuity and resilience. I found the film’s climax infectiously joyous rather than cheap or sentimental. On a deeper level, the film was able to celebrate humanity without becoming atheistic. For all the delicious irreverence and resourcefulness of Watney and his colleagues back on Earth, the script does not push them into shaking their fists at God and declaring god-like independence. In fact the film has some charming displays of folk religion along the way. Not only is The Martian a better film than Scott’s 2012 sci-fi horror Prometheus, but its universe is more recognisable than the cruel, atheistic world of that film.

And so I watched The Martian with a buzzing mind, laughing belly, popping eyes, racing heart and a full spirit. It is a filmic portrayal of Psalm 8 — the glory of humanity created in the image of God, in our loves, humour, scientific skilll and problem-solving inventiveness. And as all good survival stories are, it inspires us to be resilient: to persevere and endure in great hardship and disastrous circumstances. In Watney’s own words:

At some point, everything’s going to go South on you. You’re going to say, ‘This is it. This is how I end.’ Now, you can either accept that, or you can get to work … if you solve enough problems, you get to go home.

We don’t problem-solve ourselves into the kingdom of God, but rather enter through the rescue mission of Jesus Christ. But this does describe the kind of character formed in a human being as they do the daily prayerful problem-solving of faithful obedience in this world of many difficulties.