In the last few weeks we’ve seen a reawakening of the evangelical Trinity debate. Carl Trueman, Liam Goligher, and several reformed writers have suggested that “New Calvinist” complementarians (a group that is vaguely defined but apparently includes The Gospel Coalition) have made a serious theological error in drawing analogies between human social relations and relations between the persons of the Trinity. The argument asserts that, since the persons of the Trinity have a single undivided will, it is heretical to speak of any sort of obedience or submission between the Father and Son (outside of his human life). In this short series of posts, two of our writers, Andrew Moody and Mark Baddeley will make some observations about this complex issue. 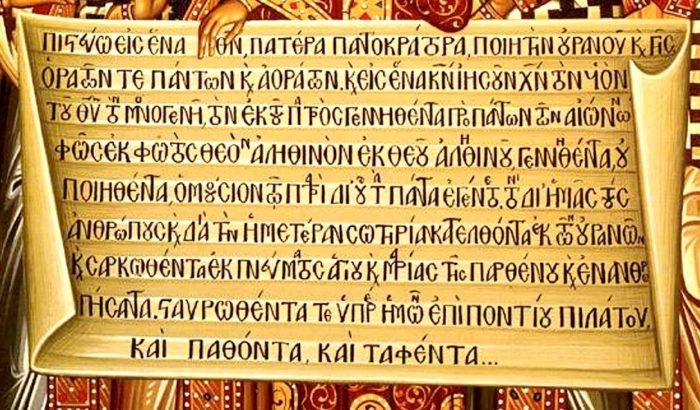 The primary charge made by Trueman and Goligher is that, by describing the Trinity as a hierarchical society, complementarians have veered away from Nicea toward a tritheist or Arian dividing of the Godhead. These are serious charges, and Mark and I will be responding to them at length. But in this post, I want to spend a bit of time commending another aspect of Nicea/Constantinople. Namely the idea that the Son is eternally from the Father – an idea often labelled “eternal generation.” It is summed up in the words of the creed:

[We believe] in one Lord Jesus Christ, the only-begotten Son of God, begotten of the Father before all ages, Light of Light, very God of very God, begotten, not made, being of one substance with the Father
(Niceno-Constantinopolitan Creed, 381)

As part of his critique, Dr Goligher notes that some complementarians have abandoned this doctrine – and he is correct, some have. However it is also true that similar rejections can be found across the board amongst modern Protestants of all stripes (including many egalitarians). Meanwhile, most evangelical churchgoers have no idea what these words even mean.

I believe that this ignorance may be the real root of our current confusion, and should have been the focus of this discussion.

4 Reasons why we should believe that the eternal Son is from the Father.

1. It’s how the Bible resolves the oneness-threeness puzzle.

All Christians, if they know anything about the Trinity, understand that God is one and three. Some think of this as if the three persons were aspects of the one God. Others think of the unity of God as arising out of the relationships between the persons. Some take it as a bare mystery; a simple antithesis.

These approaches have both merits and problems, but Scripture provides another way of synthesising the antithesis. It resolves the problem by showing that everything that the Son is and does derives from the Father.

But we also see it in the pre-incarnate life of Jesus. Scripture consistently uses terms that describe his identity in terms of derivation: Word, image, stamp, radiance. Key passages such as John 1; Colossians 1 and Hebrews 1 depict him as the mediator of the Father’s creative acts.

We also see this pattern used explicitly to show how Jesus’ divinity is not idolatrous. In John 5:18ff, Jesus claims equality with God (v18) and then immediately unpacks this relationship in terms of dependence: the Son can do nothing of himself – but is equal with God because the Father does all his great works (specifically giving life and judging) through the Son.

Significantly Jesus describes this pattern in relational terms: the Father “shows” the Son his works (v20); the Father’s goal is so that all will honour the Son as they honour the Father (v23).

If we think this doesn’t count because it is the incarnate Christ talking, 1Corinthians 8:6 (which shapes the Nicene Creed) offers the same pattern in more general terms. Against a backdrop of Corinthian polytheism, Paul explains that Christians believe in:

This, as several commentators have observed, is a reference to the Jewish confession known as the Shema “Hear, O Israel: The Lord our God, the Lord is one,”  (Deut 6:4). Except here, “Lord” means “Jesus”.  As Paul sees it, Jesus must be included in the identity of God; but he must also be distinguished as mediator of the works of the Father which occur “through him”.

Later theologians attempt to convey this tension between inseparability and agency with metaphors of the Son being God’s hand (Irenaeus), or radiance (Athanasius et al.)

2. It helps us explain the Trinity

This enriches our understanding of both creation and incarnation. it also helps us to respond to anti-trinitarians who accuse us of idolatry or polytheism. We don’t worship a second God in Jesus; rather we worship the Father though and in Jesus (Phil 2:9-11). We don’t see Jesus as a second centre of power or will; but we see him fully sharing-in and mediating the Father’s power and will.

3. It’s what Christians have always believed.

Modern writers sometimes see eternal generation as a kind of sub-Christian relic that detracts from Christ’s full equality. Some believe that it fell away as time went on or was abandoned in the theology of Western Europe.

These are misconceptions. It was crucial in the final years of the fourth century as Athanasius and Hilary of Poitiers worked to persuade Eastern theologians of the value of the term “homoousois“.[1] It was reaffirmed by Western theologians even as they debated Easterners over the Holy Spirit.[2] It was upheld in reformed theology.[3] It was believed by Gregory Nazianzen,[4] Augustine of Hippo,[5] Thomas Aquinas,[6] John Calvin[7] and countless other theologians.

Although there have been differences in the way different traditions conceived or contextualised the notion, all orthodox theologians up until the last century or so, would have agreed that the Son is eternally from the Father. We should affirm it too.

4. It helps us see the Love of the Father and the Son

When we see that the works of God begin with the Father, it opens our eyes to see creation’s true meaning. And that turns out to feature a plan by the Father for his Son to be honoured, known and loved. We have glimpsed this already in John 5:23, but clearer statements occur in Hebrews 1:2, where we hear of God appointing his Son to be heir; or Colossians 1:16, where we learn that all things were made for the eternal Image; or Ephesians 1:9-10, where Paul speaks of God’s ancient secret plan to “unite all things” under Christ as head.

This, finally, is the right context for us to be talking about the will of God the Father and the defending the honour of God the Son. History and works of the Trinity God are about God – not us (or our gender relations). Whatever analogies (or disanalogies) we might want to draw between this highest Reality and ours must be made very carefully – and, I would suggest, not until we have come to terms with the basic structure of orthodox trinitarianism.

In my next post, we’ll talk about how all this relates to the unified will of God.

[1] Thus Lewis Ayres: “… common cause could emerge between Hilary and his Eastern counterparts … [because] we find a similar focus on the significance of the Son’s generation from the perfect Father.” L. Ayres, Nicaea and its Legacy: An Approach to Fourth-Century Trinitarian Theology (Oxford: Oxford University Press, 2004)

[2]  Thus the Latin theologians at the Council of Florence (1431–1449): “[We] say the Holy Spirit proceeds from the Father and the Son not with the intention of excluding the Father from being the source and principle of all deity, that is of the Son and of the Holy Spirit, nor to imply that the Son does not receive from the Father …” N. P. Tanner (ed), Decrees of the Ecumenical Councils, 2 volumes (London Washington: Sheed & Ward Georgetown University Press, 1990)

[3] Thus Zacharias Ursinus, chief author of the Heidelberg Catechism: “The essence of a man who begets another is communicated to him who is begotten … So in like manner the eternal Father hath by eternal generation communicated to the Son his essence …” Z. Ursinus, The Commentary of Dr. Zacharias Ursinus on the Heidelberg Catechism, trans. G. W. Williard, 2nd edition (Columbus: Scott & Bascom, 1852), 181.

[4] “[T]he Son is a concise demonstration of the Father’s nature … a complete resemblance rather than like;” Oratio 30.20. Gregory is sometimes claimed as an exception to the rule, but see discussion in A. Moody, The Will of Him Who Sent Me: An Exploration of Responsive Intra-Trinitarian Willing, Paternoster Theological Monographs (Bletchley: Paternoster, 2016), 24-29.

[5] “When God begot the Son, he begot him of himself … the Father begot him equal to himself, and whatsoever the Son is, he has all from the Father … all the wonderful things that the Son does, all the truth that he speaks, he attributes them to him of whom he is.” Augustine, Sermons for Christmas and Epiphany, trans. TC Lawler, vol. 15, Ancient Christian Writers, Newman Press, Westminster, 1952, p. 136.

[7] “[T]he Father, though distinguished by his own peculiar properties, has expressed himself wholly in the Son, he is said with perfect reason to have rendered his person (hypostasis) manifest in him.” Institutes 1.13.2. Or, regarding divine action, “…to the Father is attributed the beginning of action, the fountain and source of all things; to the Son wisdom, counsel, and arrangement in action, while the energy and efficacy of action belong to the Spirit,” 1.13.18.

With Calvin there is a rather complicated question of whether the Son receives his essence or person from the Father. That is beyond us here but, as we see above, the practical outworking is basically the same. Interested readers can read more in R. A. Muller, The Rise and Development of Reformed Orthodoxy, ca. 1520 to ca. 1725. vol. 4, Post-Reformation Reformed Dogmatics, 2nd edition (Grand Rapids: Baker Academics, 2003), 324-332.