See I invented Kanye, it wasn’t any Kanyes

What if Kanye made a song, about Kanye?

Called “I Miss The Old Kanye,” man that would be so Kanye

That’s all it was Kanye, we still love Kanye

This is from “I Love Kanye”, an a capella in the middle of The Life of Pablo that a) shows what Kanye thinks about his own legacy in musical history, a legacy that he manages to be both kind of a jerk about, and yet completely correct about; b) thinks writing a meta-song about this would work on an album; c) it kinda does; and d) does it somehow with both a self-effacing sense of humour and a complete sincerity about the depth of his self-assurance.

In short, writing about Kanye is complex, especially when you step away from the easy sound-bites about egoism and towards complex issues of race, Christianity and what the heck music is trying to do anyway. 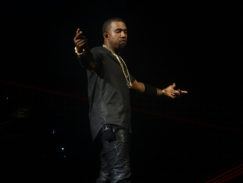 The usual sequence of listening to a Kanye track is that it moves from startling, to emphatic, to forming the bedrock for the next twelve months of popular music. It’s hard to know what that might look like off the back of The Life of Pablo: unlike the triumphant full-spectrum of Late Registration or autotuned despair of 808s and Heartbreak, The Life of Pablo might be more difficult both to pigeonhole, and to imitate, although that won’t stop legions from trying.

In one interview he refers to himself as “doing a Basquiat painting.” In that vein some of these songs are more like sketches, albeit sketches from a masterful artist. There’s a sense of urgency, that he is happy for his expression to trump his perfectionism. For the most part, he dispenses with conventional hip-hop song structures, and he’s more than happy for tracks to trail away rather than ending on a climactic hook. And that’s a good thing: so much of the music here is brilliant.

There’s a thread of enthused minimalism, with tracks revolving around a few core samples, rather than a sample bank of thousands: “Fade” sounds like the platonic ideal of a Casio keyboard beat, album highlight “FML” sounds like the keys are being filtered through the pipes in the bathroom at Hogwarts.

He may even be learning to be quiet. As a producer who has every tool in his musical toolbox and crafted several more, this may be the first album where he’s learning that silence is also an option. He doesn’t rap on the opener “Ultralight Beam”, and barely mutters out a verse on closer “Fade”.

Like everything Kayne’s done, The Life of Pablo sounds both like Kanye, and like nothing else he’s done, which, over seven albums, is both staggering and somehow easy to overlook.

The thing that’s easy to forget about the MTV awards controversy where Kanye crashed the stage and took the microphone from Taylor Swift to announce Beyonce’s “Single Ladies” video as “one of the greatest of all time” was that a) he was completely right and b) he was motivated by issues of race as much as anything else. It’s difficult to talk about Kanye without talking about race, and interpreting from the thousand microaggressions and media output, the overall message that a person of colour shouldn’t go getting stations above their airs.

But then again, it’s also hard to forgive on “Famous”, when he then namechecks Taylor and sexual relations in four obnoxious bars that I want to unhear every time I hear them.

Kanye is a Christian—in some sense of that word. I realise fully that’s a statement that will probably make a large part of the audience uncomfortable. But the why of that uncomfortableness may make for an interesting discussion.

Is Kanye Christian? Well, here is the same person who rapped, “I’m just tryna say the way school need teachers … that’s the way I need Jesus.” He’s also the same person who devotes an entire track, “Low Lights” on The Life of Pablo to a sampled testimony about the goodness of God: “No matter what you’ve been through or where you’ve been he’s always there, with his arms open wide accepting me for who I am and I love him so much, I couldn’t do it without him I wouldn’t want to.”

Why do we sometimes feel like we can unequivocally declare the Christian/non-Christian status about someone that we don’t truly know? Because of the things that he raps about? It’s worth noting that in a genre dominated by the glorification of violence and drugs, he’s never really done either. He does rap about knowledge of ladies outside of a marital relationship more than one probably should; but at the same time, he seems to be happily married, longer than most would have counted on, and is now father of two children.

Is it because he’s egotistical and should acknowledge and repent of that? Well, wait: “My number one enemy has been my ego… there is only one throne and that’s God’s …”

There certainly are moments of intense braggadocio and objectification of women and other things that don’t align with Christian doctrine. But to take these as the only descriptors of a Christian seems too simple.

In an era of internet leaks and instant marketing where there are rarely surprises about music anymore, Kanye managed to drop this bombshell, the “Pablo” of the title is a reference to both Picasso and drug lord Escobar, but is also a hispanicization of Paul, as in, the Apostle Paul.

Here’s the series of tweets about it: “Paul … The most powerful messenger of the first century… Now we stand here 20 centuries later… Because he was a traveler…”,

“He was a learned man not of the original sect so he was able to take the message to the rest of the world…”,

All of which is fascinating in an intensely Kanye-esque way: that he acknowledges the influence of the Apostle Paul on the Western World in a more deliberate way than I’ve ever heard a celebrity do; that he understands the way Paul, though a Jew, was made apostle to the Gentiles; and that, in the end, he somehow manages to make that, inevitably, about Kanye himself.

On The Life of Pablo, it’s easier to see this influence at some times more than others. He’s called it his “Gospel album” and opener “Ultralight Beam” makes that clear: it features a choir, Christian gospel singers Kirk Franklin and Kelly Price and an closing prayer:

The self-examining heart of the album is with the introspective three-track run on the second half of the album: “FML” notes his struggles with depression, medication, and self-control; “Real Friends” reflects on the pressure that music and money has had on his friendships; and on “Wolves”, while Sia lends her perfect pipes to the background, Kanye muses about doubt, fear and family.

This is the kind of introspection that having children can bring about. And this is an album about family, in as much as it’s about anything.

The final paradox is that this might be the first album where Kanye comes off as anything less than confident. There’s an undertone that he’s frustrated with what he can’t say in rap, a few times his raps fizzle out even as he says them. On “30 Hours”, the lyrics and beat evoke long, late night drives. He ad-libs his second verse, drops the flow, and then stops to answer his phone while the beat rides on. However, the confidence comes at least in this much humility: to put it out there as less than word-perfect, and still have it stand as perfect representation of what he wants to say.

At several points on the album, Kanye does seem to be turning away—from fame, from women, from money, from his past—realising that they don’t hold the answer that he’s looking for when he “just wants to feel liberated”.

I’m not saying this is the first point in a kind of Damascus Road experience, but stranger things have happened, for example, in the life of the Apostle Pablo

Guan is a freelance writer and book reviewer with Eternity. He likes writing about books, books about writing, and everything about coffee. You can find him on Twitter @thisisguan.

1 Three Bookmarks and a Bible

2 4 Considerations for Christians Wanting to Engage in Political Activism