In almost any conversation about our indigenous people you won’t have to wait long for someone to mention the ‘deep spirituality’ of our first peoples. While that’s a nice sentiment, what does it imply about the spirituality of those of us who have come along in more recent times?

More importantly, what does it foreshadow about the inevitable cultural clash that occurs when the Gospel of Jesus Christ intersects with traditional religions?

As the Christian gospel was preached, indigenous Christians rose up to take the good news to their people; but it came at a cost.

For those of us who grew up in a nominally Christian society, becoming a true follower of Jesus Christ is not a particularly difficult thing to do. Sure, there will always be those who will ridicule us for going to church or we may be accused of being Bible-bashers, God-botherers and the like but it’s not a big deal; just keep it to yourself.

But what happens if you are an indigenous elder and you offer to serve God as a leader in the church?

Let me give you two examples from Arnhem Land.

The first is a story from a former Bishop of the Northern Territory, Bishop Clyde Wood, about the first ordination of an indigenous man on Groote Eylandt, Rev’d Aringari Wurramara.

Bishop Clyde was most impressed by the involvement of the community in the ceremony that was to set apart one of their own as the minister of the local Christian church.

A large group of community elders gathered around the candidate and sang, danced and chanted all the way to the church where the Bishop was waiting.

Before entering the packed church, the elders had one more ceremonial act to perform. As they presented the ordination candidate to the Bishop, they removed the sacred dilly bag from his neck.

But what was going on here? Reflecting on decades of ministry among indigenous people, Bishop Clyde now speaks of the event as a ceremonial ‘handover’ of the candidate to the whitefella boss. The candidate had been stripped of his role as custodian of the deep secrets of his tribe as evidenced by the removal of his sacred dilly bag as he entered the church. 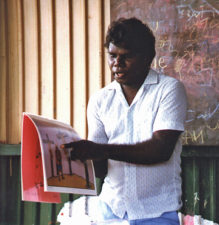 The other example was closer to home for me. The community I lived in had just welcomed its first indigenous minister.

Rev’d Peterson Nganjmirra was a Kunwinjku man who had trained at Nungalinya College in Darwin. Leaving behind a life of alcohol abuse after his conversion to Christianity he married Stephanie who shared his commitment to Christ.

Rev’d Peterson Ngangmirra travelled throughout West Arnhem Land taking the Good News of Jesus Christ to aboriginal Christians in some the most remote places in Australia.

His home town of Oenpelli (Gunbalanya) in West Arnhem Land had been wracked by alcohol-fuelled violence. It was not a happy place. In fact, the place felt spiritually dead. The people didn’t smile much. Rape, domestic violence and murder had become common-place.

Peterson decided to do something about it and invited communities across the Top End to join the Oenpelli people for a weekend of fellowship around the word of God.

Peterson wanted to make a statement and scheduled the ‘rally’ for a weekend which would see the culmination of a month-long ‘Gunupipi’ ceremony. Oenpelli Christians felt that this ceremony embodied too many elements which they considered incompatible with the Christian faith. Peterson would not elaborate on the specifics but warned me, ‘You don’t want to know what goes on.’

Approximately 300 visitors arrived and the weekend was underway with singing, dancing, readings from the Bible and preaching by a visiting elder from another community.

On the second night, a group of men who were painted in their ceremonial colours approached Peterson and made this charge: ‘We cannot continue our ceremony because the Spirit you people have brought here is too powerful for us.’ They then physically attacked him.

At that point, a very strange thing happened. I heard a sound like the one a pencil makes when it is snapped in two. The whole atmosphere of the town changed in an instant and my middle-class western evangelical upbringing was really challenged I was being tossed around in uncharted waters.

Throughout his ministry, Peterson’s commitment to Christ remained strong. He saw these conflicts as the inevitable consequence of the clash of kingdoms: The kingdoms of light and darkness.

St Paul affirms the supremacy of Christ in his letter to the church at Colossae in this way:

Please note that I am not suggesting that all aspects of indigenous culture are ‘dark’ or ‘evil’ any more than are aspects of other cultures. All things must be subject to Christ and will require wisdom and discernment.

However, one thing we cannot do is impose practices on the indigenous church which they don’t understand. Nor can we condone cultural practices, which we may not really understand.

One such practice is the smoking ceremony. Nowadays it is quite fashionable to conduct such ceremonies at public events. After all, it is quite photogenic and gives a uniquely ‘indigenous’ feel to the proceedings.

I would challenge non-indigenous Christians to think through what they are doing when they request, or accept, a smoking ceremony for a church event.

In Arnhem Land, smoking is most frequently carried out to cleanse a place where a person has died, of the residual spirit(s). If a person dies in a house, it has to be vacated for a prescribed period of time. Once the house has been smoked and the spirits cleaned out, the house can again be occupied.

The same is true for vehicles that transport corpses. As the local community’s pilot I often had to transport the deceased from the morgue via car to the airport and by plane to a community for burial.

When told my car and plane would have to be cleansed, I politely declined. Why? Was I being disrespectful?

That depends on whom you wish to give the highest honour.

Syncretism and the Scriptures

Syncretism and the Scriptures

Avoiding syncretism is vital if any church is to grow with strong foundations in the Word of God yet all cultures are guilty of it to some extent.

The indigenous church must reflect its worship of Christ in ways that are culturally appropriate but never at the expense of the gospel. As in the western world however, there will be a range of opinions about where those lines are drawn.

Being a Christian missionary working in a Christian organisation I found it hard to accept that my car and plane were subject to the spirits of dead people. I explained to my clients (who were often personal friends and tribal relatives) that the Spirit of Christ is the most powerful spirit in the entire universe and that I felt quite safe relying on Him to purify and protect.

The response was always “Oh, OK then”.

Make no mistake, the spirit world is an ever-present reality. Sadly it has become a taboo subject in many suburban evangelical churches. Satan appears to have hoodwinked Christians with a plethora of distractions which mask his identity. Not so in the bush.

We would do well to consider the views of indigenous Christian elders who grew up being instructed in the ways of their culture and have struggled to reconcile the ways of their two worlds. They often call this ‘Two-way living’.

In his excellent biography on the Rev’d Canon Michael Gumbuli Wurramara, who became the first aboriginal Anglican priest ordained in the Northern Territory, author and former CMS missionary Dr Murray Seiffert explores these issues in detail. A whole chapter is devoted to Gumbuli’s views on the spirit world.[1]

The late Rev’d Peter Gundu, a fellow clergyman in Gumbuli’s neighbouring parish of Numbulwar summed up the challenges this way:

“Hunting and doing dancing doesn’t affect Christian ways. But coming to ceremony things, because we have ceremonies. There are three, maybe three or four [ceremonies]. That’s the only thing that affects Christian people here. It’s hard for us to jump for what we believe in this new way of life, Christian way of life, and get along with our old culture ways of life”.[2]

Spare a thought for indigenous church leaders who may have paid a very high price for identifying with Christ. They suffer loss of status, loss of opportunity, loss of income and at times suffer violence at the hands of those who do not accept the Lordship of Christ.

The pressures are real and even magnified in small communities.

Please also pray for indigenous Christian leaders who are trying to apply what little scripture they have access to in order to bring transformation to their communities. Pray that they will do what brings honour and glory to the Lord Jesus Christ while affirming the good things that each and every culture has as a gift from God.

Phil Zamagias is a husband, father and former missionary pilot in Arnhem Land with a passion for people to come to know Christ. He is the Rector of Fred’s Pass Anglican Parish in the Northern Territory which covers 29,000 sq kms extending from just outside of Darwin, including Litchfield National Park, parts of Kakadu National Park and borders with Arnhem Land.

The past 18 months have proven difficult for all Victorians. During this time hundreds of thousands of Victorians have been gratefully receiving support, care and education provided by religious organisations...