Like most Baptist families in Western Australia, mine was one in which the name “Dr Vose” was  spoken with hushed tones. Noel Vose was the most prominent and admired Western Australian Christian leader of his generation, and the greatest statesman Australian Baptists have  produced.

Born in Western Australia on 23 December 1921, Noel grew up in the Great Depression, in a humble family that moved regularly in order for his father to look for work. By the time he was fifteen, he had attended some eighteen different schools. He left school at fifteen and joined the public service working in the Post Office in various country towns before moving to Perth. In the 1940s work at the Post Office involved dealing with military codes, and in 1943-1945 he served in the Air Force itself.

Although Noel’s parents did not attend church, they had sent him to Sunday school. He was converted at the Methodist Church in Northam (a town about a hundred kilometres from Perth) at the age of fifteen. It wasn’t until moving to Perth and attending Maylands Baptist Church that he was to begin his life-long association with the Baptist Churches.

It was in the Air Force years that Noel felt called to the ministry of the word. Having left school early, and being by his own admission a terrible student who “hated school with a deep hatred,” he first undertook his matriculation in English. He then applied to study at the Baptist College in New South Wales, then under the leadership of Principal George H. Morling, after whom it is now named. It was there for the first time that he discovered he was “able to study.” After completing his studies at the Baptist College, he went on to do a Bachelor of Arts, and a Master of Education. He then went to the United States to do postgraduate studies in Chicago and Iowa. His doctorate was on the Puritan theologian John Owen.

Noel was ordained in 1951 and pastored small churches in Fremantle and Dalkeith while completing his Arts and Education degrees. Though at heart a pastor and an evangelist, he was moved by the need for training amongst Baptist pastors, who at that stage had no formal training available to them. In the 1950s a committee was formed by the Baptist Union to explore training for WA pastors. Noel served on the committee and in 1959 he was sent to NSW to see if there was anyone who could come to WA to help establish a College. Unknown to Noel, George Morling wrote to the committee and said, “Why are you looking? You’ve got somebody there. Why don’t you use him?” He was referring, of course, to Noel. 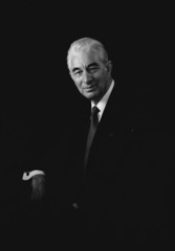 The Baptist College began in 1963 with Noel as its principal and sole faculty member. It was run out of an old house lent to the Baptists—a house in which the Vose family also lived. In 1967 the College moved to its own premises in the suburb of Bentley.

In 1975 Noel also became president general of the Baptist Union of Australia, a role he fulfilled until 1978. In that period the Baptist World Assembly (BWA) needed an Australian representative and Noel took on the role, attending the Assembly meeting in Stockholm in 1975.

In 1980 he was invited by the BWA to become its president, and it was this leading role among world Baptists that brought him to international prominence. He served in the role for five years, and in that time travelled extensively, meeting with secular and religious leaders, and gaining an extraordinary perspective on the work of Baptists across the globe.

Noel’s beloved wife Heather died on 5 June 1990, while the couple were on a visit to the United States. He missed her every day of his life. On his retirement from the College in 1991, Noel continued to have an extensive ministry of preaching, mentoring, pastoral care and advising. He continued in retirement to be what he always was at heart—a pastor.

Though a man of deep learning and a consummate statesman, he was also extroverted and mischievous. I remember him  at a small dinner in 2013, marking the fifty year anniversary of the death of C S Lewis. Noel, then in his 90s, was there and was – by a significant margin – the most energetic and rambunctious guest in attendance! He bounced around the room, talking to anyone and everyone. His recital and exposition of two of Lewis’s lesser known poems had the room alternately spellbound and in stitches with laughter.

Though Baptist by conviction and evangelical in theology, he had a generous ecumenical spirit and worked with people of a wide variety of backgrounds. He wasn’t simply diplomatic—he was curious. He wanted to understand and to learn from people whose traditions were not his own.

Noel was always the most interesting man in the room. But he had that uncanny ability to make you feel interesting, because he was always so interested in you.

“Blessed are the dead who die in the Lord from now on.” “Yes,” says the Spirit, “they will rest from their labor, for their deeds will follow them.” (Revelation 14:13)

1 Apostate Testimonies: Talking to Those who Left

3 COVID Vaccination and The Church

Mars Hill and the Problem with Crowds

Christianity Today’s podcast The Rise and Fall of Mars Hill is making waves across the Evangelical world. [1] It’s the tragic tale of a church, Mars Hill (Seattle), which for...

On the Love of Size