October 11-17 is Anti-Poverty Week in Australia. To gain some insight into the problems of poverty, we asked Professor Ian Harper to share some of his expert reflections. Professor Harper is an Australian economist, Reserve Bank board member and has worked with governments, banks and corporate bodies at the highest level. In 2020 he was awarded an AO in the Queen’s Birthday Honours List for services to education and economic policy reform. He is also a public Christian and has written on economics from that perspective in his award-winning book Economics for Life.

TGCA: Professor Harper, firstly thank you for being willing to help us think about global poverty. Could you begin by giving us a bit of a bird’s-eye perspective on the problem of poverty. How does the situation stand today? Have things been getting better or worse over the last hundred years?

By almost any measure of human welfare, living standards in Australia have improved markedly over the past one hundred years. … GDP per capita has risen by 475%.

By almost any measure of human welfare, living standards in Australia have improved markedly over the past one hundred years. The economist’s preferred measure of material living standards—real GDP per capita—has risen by 475% between the early years of the 20th century and today; that is, on average, Australians living today consume nearly five times more than their great-grandparents did a century ago.  That doesn’t mean that they eat five times more food! It does mean that the quality and frequency of meals has risen, with less rotten food and fewer days when not much at all was eaten. But it also means that the quality of education, health and other public services like sanitation and public transport are many times higher than they were a century ago. People live longer now, infant mortality is far rarer, as is the death of women in childbirth, and people are able to afford leisure time, whereas that was a luxury enjoyed only by the rich in earlier times. People also live in bigger and more comfortable houses that are well lit at night, heated in winter and cooled in summer.  And, of course, communications have advanced almost unimaginably since the days of the wire telegraph and mail delivered by horse and cart!

TGCA: We often hear that the gap between the rich and poor is increasing these days. Is that true and, if so, is it something that we should be concerned about?

The answer to this question varies depending upon whether you’re comparing across countries or with countries, and then which countries you pick. The dramatic rise in living standards experienced by billions of human beings in China and India—but especially China—over the past fifty years shows up on any measure as a narrowing of the gap between the rich and the poor globally.  Even though rich countries have gotten richer, poor countries have gotten richer even faster, and especially the most populous poor countries.  The Millenium Development Goals that were set for 2000 were achieved in advance of the deadline and so have been raised since.  The numbers of people living on less than US$1 per day has steadily fallen.  All of these measures point to a narrowing gap between the global rich (on average) and the global poor.  This is not to say that there aren’t more super-rich people in the world today—which there surely are—but that the average poor person is much less poor today than the average rich person.

The story is not quite so clear cut within countries.  Within countries, much depends on the operation of government transfer schemes (the ‘welfare state’) designed to redistribute income from the rich to the poor.  If these schemes work well, as they do in Australia, then the gap between the incomes of the rich and the poor has changed very little over the past decades—in some cases, the gap has actually narrowed.  In fact, during the pandemic here in Australia, the gap has definitely narrowed given the generosity of government schemes like JobKeeper and JobSeeker that have actually increased the incomes of people at the lower end of the income distribution.  But even in more normal times, Australia’s progressive income tax system and generous ‘safety net’, including free and universal public health care, have kept living standards for the poor from falling further and further behind those of the rich.

TGCA: What do we know today about the things that increase or alleviate poverty?

Most economists agree that the number one factor keeping people out of poverty—or helping them escape poverty—is employment.  Getting and keeping a job is the way to avoid being poor, especially in a country like Australia where wages are regulated so as to prevent people in work being paid ‘poverty wages’. The second major factor is adequate housing.  People who become homeless for whatever reason quickly descend into poverty.  Another factor that has reduced poverty during the pandemic has been the government’s efforts to house homeless people in hotels to protect them and others from infection.  This has helped many homeless people gain access to welfare support services and improve their daily living conditions, even without having a job. So policies that support employment (or seek to reduce unemployment) and improve access to housing, including public housing, are essential weapons in the fight against poverty. 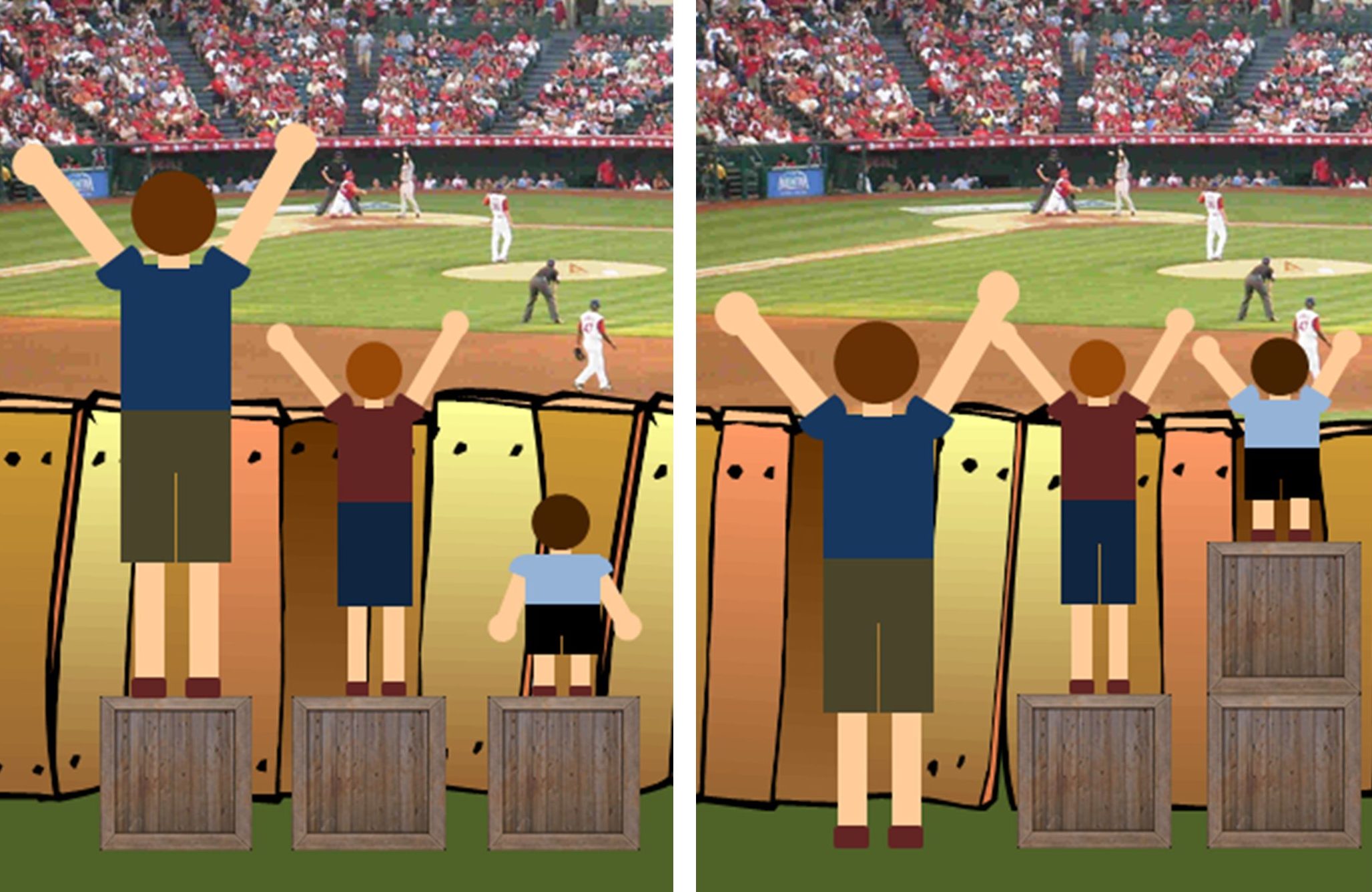 TGCA: There is a popular internet meme involving a picture of three people and three crates that attempts to show the value of redistribution in economic systems. Do you think it illustrates a helpful model?

It is helpful in pointing out that people in different circumstances need different levels of support to ‘enjoy the game’, so to speak.  It’s also helpful in demonstrating that ‘progressive’ income redistribution, i.e., disproportionately taxing people with higher incomes so as to transfer welfare benefits to people on lower incomes, can help promote ‘equality of opportunity’.  This is the basis upon which Australia’s income tax and social welfare system is founded.

Equality of outcomes is neither necessary nor desirable nor, in the end, even achievable. The focus should be on allowing the ‘shortest’ figure to see the game, not on bringing all of the figures into alignment.

I think the meme is unhelpful, though, in implying that the aim of income redistribution is ‘equality of outcome’.  All three figures are at the same height following the re-allocation of the boxes, whereas the aim should be simply to allow all three to see and hence participate in the game.  The tallest figure could still be taller than the other two after the box reallocation without compromising the objective of achieving equality of opportunity.  Equality of outcomes is neither necessary nor desirable nor, in the end, even achievable.  The focus should be on allowing the ‘shortest’ figure to see the game, not on bringing all of the figures into alignment.  That’s not needed for poverty alleviation and just incites resistance by those who are required to make sacrifices, i.e., give up their boxes!

TGCA: Are there biblical principles—either OT or NT—that can help us think through these questions of wealth and poverty?

The OT is full of warnings to Israel not to ignore or exploit the poor and defenceless in society.  Some of the OT prophets, like Amos for instance, are scathing in their denunciation of rich Israelites for dispossessing and oppressing the poor.  The OT principle of ‘jubilee’ outlined in Leviticus requires the forgiveness of debts among Israelites every fifty years as a way of preventing the systematic accumulation of wealth and intergenerational poverty within Israel.  Mind you, it’s not clear that it ever actually happened! In the NT, Jesus tells many parables aimed at reminding people of the spiritual dangers of amassing wealth in this life and of ignoring the plight of the poor.  The parable of the rich man and Lazarus reminds us never to ignore someone whose material needs are far greater than our own—we could be ignoring the Lord himself, as He poignantly reminded His disciples on another occasion.

TGCA: To what extent does the West owe its prosperity to economic structures, as opposed to its Christianised culture?

The notion of private property itself is fundamental to the Judeo-Christian worldview: the eighth commandment “Thou shalt not steal” presupposes that some things are mine to keep and you cannot just take them from me against my will.

This is a deep and complex question because the two are quite closely related—more than many people realise or are willing to admit. The notion of private property itself—a foundation stone of Western market economies—is fundamental to the Judeo-Christian worldview: the eighth commandment “Thou shalt not steal” presupposes that some things are mine to keep and you cannot just take them from me against my will.  Of course, you can offer me something in exchange if you want what’s mine—that’s the basis of trade and exchange. Similarly, there are principles relating to work, caring for the poor (leaving the gleanings of the field for the poor to gather) and prosperity itself (‘seeking the prosperity and welfare of the city’ Jer. 29:7) which find expression in the way we operate—or try to operate—modern market economies.

TGCA: What do see in the future for our (and the global) economy, and what should churches and individual Christians be doing to prepare for it?

The immediate future, as economies recover from the pandemic, will bring some of the most challenging economic conditions since World War 2. Here Christians must be watchful for the impact of tough economic times on their faith communities and the broader community as people struggle with the consequences of joblessness and financial stress.  Governments can and will do much more than in past episodes like the Great Depression because of the additional wealth we now enjoy compared with earlier times.  But the human impact will still be significant and Christians must be on the watch for opportunities to serve and care for those most severely affected.

On the brighter side, new and different ways of working and new business opportunities will emerge from this crisis. These are to be welcomed and encouraged.  Christians are no strangers to God bringing good things out of bad things, the cruelty and shame of the Cross being the supreme example but the sale of Joseph into slavery in Egypt also comes to mind.  The pandemic is no different.  Many may wonder where God is and whether, as the Psalmist wondered, He’s gone to sleep!  But God continues to provide for the world He loves, and Christians can be a source of hope, encouragement, support and love to those for whom the coming economic transitions will bring great stress and pain as well as opportunity for the future. For His plans are not to harm us but to give us a hope and a future (Jer. 29:11).  This is a message many may need to hear and take to heart over the next few years.

TGCA: Thank you once again for talking to us!