“Reformed” is a word bandied about by all and sundry in all kinds of ways. But what really is a “reformed” Christian?

Historically “reformed” refers to a tradition within Christianity that arose out of the sixteenth-century Reformation. I hope to clarify what it means to help us understand something of what happened in the Reformation itself and its importance for us today.

The Problem with Labels

Labels like “reformed” can be used unhelpfully. Some Christians wield “Reformed” to bully others. For example, some use it to exclude: “You’re not really reformed because you don’t believe in limited atonement”. Others use the label to claim superiority: “We Reformed affirm God’s grace in salvation unlike you Arminians”.

Calvin was a giant amongst them. But his writings were neither confessional nor regulative for the reformed.

However, labels do have value. They help us classify information to better understand it. The “pine” and “gum” are both trees. These labels help us grasp the differences between two types of tree, and so aid their care and flourishing. And so, a label like “Reformed” helps us identify the unique characteristics of one strand within the Christian tradition; and to evaluate whether its emphases and reading of Scripture support our love and service toward God.

The Problem with “Calvinist”

Many use the label “Calvinist” as a synonym for “reformed”. But there are two problems with this. Firstly, “Calvinist” was originally a term of abuse, and so lacked a precise meaning. And over the years it’s accumulated even more baggage, muddying its meaning even more. But, secondly and more importantly, no reformed Christian of the sixteenth or seventeenth century understood John Calvin as defining their tradition in toto. He was viewed as one figure amongst others like Huldrych Zwingli, Martin Bucer, Henry Bullinger, John Oecolampadius, and Peter Martyr Vermigli, who all helped found the reformed tradition. Yes, Calvin was a giant amongst them. But his writings were neither confessional nor regulative for the reformed. Calvin is not enough.

The Problem with TULIP

Many contend that the so-called five points of Calvinism are what defines a “reformed” Christian. The five points are supposedly a summary of the Synod of Dort (1618-1619) using the acronym TULIP: Total depravity, Unconditional election, Limited atonement, Irresistible grace, and final Perseverance.

But there are two difficulties in using five-points this way. Firstly, the Synod of Dort was not an attempt to define the reformed tradition as a whole but resolve a particular controversy (the Remonstrance) in an already existent Reformed tradition. Back in 1979-1980 there was a dispute about why Australian cricket played with an 8-ball over. It was officially decided that cricket world-wide would use a 6-ball over. This controversy resolved one element within the game of cricket. It did not define the entire game. So, cricket cannot be defined as simply a 6-ball over. There is much more to it than that. This is like Dort’s relation to the Reformed tradition. It did not define the entirety of the tradition but resolved an element in it. And so, the five-points of Calvinism alone do not determine whether a person is reformed.

The second problem with using the five-points of Calvinism is that this English summary of a Latin document, with its acronym TULIP, fails to convey the nuances of Dort. The “five points” and acronym “TULIP” were developed hundreds of years after Dort, and they clip away important distinctions made by Dort. Take, for example, the third and most controversial point: “limited atonement”. No theologian of the sixteenth and seventeenth century ever used the word “limited” in reference to Christ’s death. The reformed divines all agreed that in some sense the atonement had an infinite sufficiency and in another sense an efficiency for only the elect. These two affirmations allowed for a variety of positions on the extent of the atonement but they excluded the Arminian (or Remonstrant) position. So, the slogan “limited atonement” fails to convey both the sufficient and efficient affirmations of Dort. And when half a truth is taken to be a whole truth, it becomes an untruth.

The Christian tradition is also known as “catholic”, in the sense of universal not Roman. Historically catholic Christianity is expressed in the Nicene Creed. It was written at the councils of Nicea (325AD) and Constantinople (381AD) against the Arian heresy. This creed contains a summary of the trinitarian Gospel. It sets the belief boundaries of the Christian tradition encompassing Protestants, Roman Catholics, Eastern Orthodoxy, Oriental Orthodoxy, and the Ancient Church of the East. Because non-Trinitarian traditions like the Jehovah’s witnesses and Mormonism cannot affirm the Nicene Creed, they cannot be called Christian.

The Protestant tradition within Christianity surfaced at the sixteenth-century Reformation spearheaded by Martin Luther. The reformers originally called themselves “evangelicals” well before the term “Protestant” was used, to show that the Gospel (euangelion) was central to their understanding of Scripture and theology.

The reformers originally called themselves ‘evangelicals’ well before the term ‘Protestant’ was used, to show that the Gospel (euangelion) was central to their understanding of Scripture and theology.

The Protestant tradition is usually distinguished by the four classic “alone” slogans: Scripture alone, grace alone, Christ alone, and faith alone. It contends that Scripture alone is the supreme (not only) authority for believers, and that salvation is by God’s grace alone because of Christ’s work alone received by faith (or trust) alone. In opposition to this, Roman Catholicism upholds the supreme authority of Scripture and tradition, and salvation by faith as well as a believer’s good works (even if they are spirit-empowered).

However, at the Reformation two traditions emerged within the Protestant camp: Lutheran and Reformed. What originally distinguished the two was not predestination but the Lord’s Supper. Luther and his followers held that Christ’s body and blood were physically present in the bread and wine (the real presence). Reformed figures such as Zwingli, Bullinger, and Calvin denied it. But the real presence was so important to Luther and his followers that it led to an official parting of ways between the Lutheran and Reformed.

The boundaries of belief for the Lutheran tradition were officially defined in the Book of Concord (1580), a collection of important Lutheran confessions and affirmations. However, because the reformed tradition covered a number of separate geographic communities (in France, Scotland, England, the Rhineland, and the Low Countries to name some) each group crafted their own confession. Hence, the reformed tradition came to be marked out by a variety of confessions: the Gallic (or French) Confession (1559), the Scots Confession (1560), the Belgic Confession (1561), the Thirty-Nine Articles (1563), the Heidelberg Catechism (1563), and the Second Helvetic Confession (1566). To these foundational confessions were added the Synod of Dort (1618/9) resolving one particular controversy in an already existent tradition. And it was further refined by the great seventeenth century confessions such as the Westminster Confession of Faith (1647) for Presbyterians, the Savoy Declaration (1658) for Congregationalists, and the 1689 London Baptist Confession of Faith for reformed Baptists.

So, a Christian is reformed if they are able to affirm any one or more of their major confessions. We may diagram this as follows: 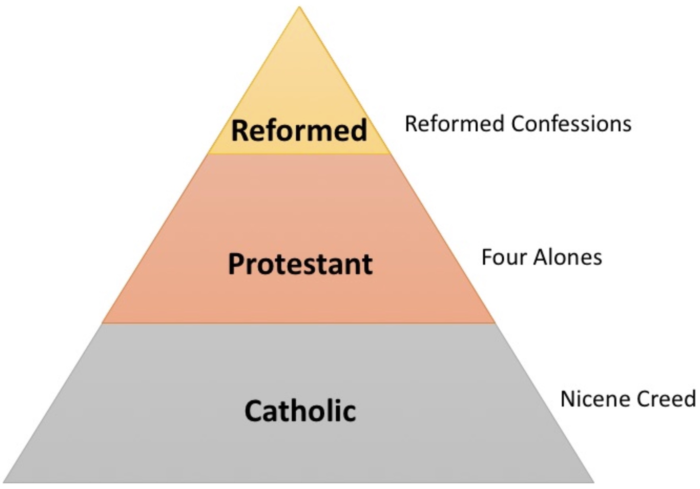 When we define the reformed tradition in this way several important implications follow. First, being reformed is not simply about predestination. The foundational reformed confessions also include a particular understanding, for example, of the church, ministry, and sacraments, much of which is lost to many who claim to be reformed.

Third, the doctrines unique to the reformed tradition are not as weighty as those that define catholicity. For example, the Nicene doctrine of the Trinity is far more important than views on the real presence (which itself is not unimportant).

Marty Foord is lecturer in theology at Evangelical Theological College Asia, Singapore. In a former life he worked IT before there was a world wide web. But he entered the Anglican ministry in 1996. Marty is married to Jenny, and loves spending time with her. Marty and Jenny love serving God’s people together in the local church. In his spare time Marty listens to Bach, enjoys good coffee, and can’t surf often enough.

See Samuel Green’s first post here. I was in a taxi and my driver was a Muslim, and I wanted to share the gospel with him. You may have been...