Accidental Pharisees by Larry Osborne resonates with a worry that I’ve had for some time—that it’s easier to follow the tribal position than to assess how we think, speak and act in the light of Scripture. My worry is that we can major on the minor issues and lose sight of what’s most important. And we argue our positions with such passion that we fail to love people who take a contrary viewpoint. We see evidence of this in blog comments and Facebook posts all the time. Sometimes we see a stronger push for Christians to distance themselves from one another over non-salvation issues, than for them to affirm their unity in salvation.

This is not to say that doctrine is unimportant, or that the Scriptures are not the authoritative and clear revelation of God. Read the double negatives carefully! Doctrinal truth brings life and the Bible leads us to faith in Jesus Christ and equips us fully for every good work. Truth is foundational to life and to unity. But the Scriptures are a message of love, grace, mercy, kindness and forgiveness. If we speak ‘truth’ without love then we are distorting God’s word. If we seek to love without truth, then we will ultimately fail, for only the truth can be truly loving. And so we are called to speak the truth in love and not separate the two. (Eph 4) 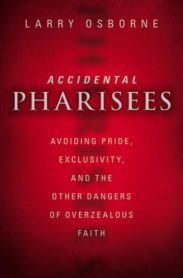 Accidental Pharisees is a word in season. It addresses all kinds of blind spots. It challenges us against taking the higher moral ground and looking down on others. It warns against the dangers of pride and exclusivity. It unpacks some of the new ways we can introduce legalism. It spotlights the danger of seeking uniformity rather than rejoicing in our unity in diversity.

There is a tendency among Christians to divide into tribes along non-essential lines. Osborne writes that:

We’ve coined words like radical, crazy, missional, gospel-centred, revolutionary, organic, and a host of other buzzwords to let everyone know that our tribe is far more biblical, committed, and pleasing to the Lord than the deluded masses who fail to match up. (p. 90)

These labels have their usefulness. They can be used to correct wrong emphases or to call the troops to action. But they become dangerous when used as a shibboleth to divide Christians from one another. We have centuries of tradition in doing this—Baptists separating from Presbyterians; Methodists from Anglicans; Congregationalists from Episcopalians. There have been good reasons for many of these distinctions and even separations, but the label or the club is not what defines or describes a true believer. That privilege belongs to the gospel of Jesus Christ alone. Of one thing we can be sure—none of these badges will have any relevance in heaven.

Accidental Pharisees also warns against bullying behaviour that is more keen to separate the sheep from the goats than it is to win back the lost sheep. Some churches and their leaders are very committed to setting a high bar of ‘Christian’ performance and they castigate the under-performing and the lukewarm. This change strategy tends to favour the big stick over the winsome power of the gospel. It can easily become a slippery path to a legalism that forgets the gospel. We would do well to remember that there but for the grace of God go I.

As The Gospel Coalition Australia gets underway, it is of vital importance that we consider carefully what unites us and how easily we can become divided. It’s important to be humble and open to critique. There are times when people outside our tribes see clearly what we cannot. Blind spots are real and potentially hazardous. I recommend we read Accidental Pharisees with a view to log extraction, so that we can see more clearly to help one another with our various splinters.

‘Do not judge, or you too will be judged. For in the same way as you judge others, you will be judged, and with the measure you use, it will be measured to you.