A depressing—and depressingly common—observation of the current church scene in the West is that evangelism seems to have fallen off the radar.

Now, it could be that those who say so are looking in all the wrong places. Perhaps what in the 1990s and early 2000s was easily and clearly labelled “evangelism”— a guest service, a dialogue dinner, a Christianity Explored Course, a pub full of students at which someone gave a talk, at the conclusion of which one could metaphorically (and often literally) tick a box to say that you’d become a Christian—perhaps these forms have disappeared, while the actual work of evangelism remains. Perhaps evangelism has moved to personal conversations, the planting of new churches, workplace outreach, and the drip-feed of long exposure to a Christian community and its teaching. As we mark the passing of Billy Graham, it’s not particularly controversial to note that large-scale Crusades have also passed as a credible evangelistic method in the West. That’s not the same thing as saying that evangelism no longer happens.

Still, even with all those qualifications in place, it’s hard not to get the feeling that evangelism is not in the centre of our radar in the way it once was. 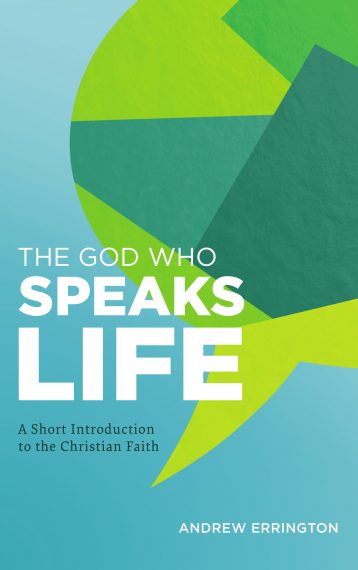 Which is all to say that it’s a delight to be reviewing Andrew Errington’s new evangelistic resource, The God Who Speaks Life: A Short Introduction to the Christian Faith. It’s even more delightful to be able to report that it’s not just new, but good. Very good.

This mercifully short book (82 pages) covers an ambitious stretch of territory, and does so with verve and insight.

This mercifully short book (82 pages) covers an ambitious stretch of territory, and does so with verve and insight. The content is artfully arranged around five chapters on God himself (God the Creator, the Judge, the Saviour, the Life-Giver and God as Trinity), with each of these chapters interspersed by a chapter on a topic that flows from what has just been said about God (the doctrines of creation, sin, grace, church and scripture). In this way it builds toward a compelling account of the gospel.

The distinctive feature of this book is the way it loosens the distinction between evangelism and catechesis. Previous models strictly separate evangelism, as that which specifically addresses the non-believer, from the task of catechising believers. Evangelism would typically cover the topics of the death, resurrection and lordship of Jesus as they address the as-yet-undecided. Then, after a decision had been made, the now newly-believing person would be catechised in the doctrines and practices of Christian faith, such as prayer, church and sanctification.

An exposure to traditional catechetical instruction on something like the Nicene Creed, the sacraments, the Lord’s Prayer and the doctrine of the Trinity are often at the whim of the preacher, or left to languish in the material for a confirmation course, or a discussion group for the extra-curious. Sometimes they aren’t touched at all.

This book flips that approach. Here, that sort of traditional material is brought back into the evangelistic process. By the end of the course, the participant (or should I say catechumen?) should receive, not only a clear grasp of the way of salvation, but (at no extra cost) a working knowledge of patristic Christology, trinitarian faith, and the meaning and purpose of the Lord’s Prayer.

The other great gift of this book is its determination to give the reader a direct encounter with Scripture. It is not just a book about what the Bible says; it has large texts of Scripture throughout, and it encourages the reader to grapple directly with it—not just with what the author says about it.

The process of evangelism takes longer and needs more room to breathe than it used to.

For people who came of age in an era when the evangelistic challenge was to make the message of the gospel as accessible and therefore as “unchurchy” as possible, this approach will feel counter-intuitive. However, I think it operates from an important instinct. Our moment is precisely one in which evangelism looks more and more like catechesis. The process of evangelism takes longer and needs more room to breathe than it used to. A basic exposure to broader Christian instruction is an excellent strategy for bringing someone in contact with the gospel. It acknowledges that the electricity can’t flow before the cables of a Christian world-view are laid.

I think this will appeal to millennials and other young(er-than-me) people for whom the idea that Christianity has deep roots across time and culture is not a bug but a feature. The thought that Christians might collectively recite words they did not write (as in the Creed) or say a prayer they did not craft (as in the Lord’s Prayer) is so exotically not what the baby boomers did that it has become fresh and attractive.

This would be a great book for an evangelistic course, a young adults group, baptism preparation, or simply to hand to an interested friend at work or university. Recommended.