It’s 2022 and our bookshelves and newsfeeds are saturated with resources pushing us to “do more!” and “be better!” Influencers and life coaches are promising rich rewards from a lifestyle of Hurry and Hustle. With a dash of grit, a sprinkle of self-love, and a strategy of ceaseless striving, we can save ourselves and be the heroes of our stories … or can we?

I’ve never known a life without striving. Perhaps it’s because my kingdom was built by the sweat of immigrants and refugees—fleeing homelands with bruised hearts and pockets full of dreams. With silent determination, they saved every dollar from the jobs nobody wanted, ploughing the path for my voice to be heard. My moral compass was influenced by my grandmother’s Buddhist roots. I learned our hardships were punishment from the misdeeds of a previous life, and unless I was more careful, I could be reborn a dirty cockroach in the next one.

When I reflect on my upbringing, I realise the demands to “do more” and “be better” are not a modern phenomenon. These values have always existed in my family’s psyche, forged by a cultural context of escaping poverty, guilt and shame. Over time, my family’s efforts to turn their rags into riches inspired in my bones a gospel of self-sufficiency: Only I am responsible for my happiness and salvation… so never stop striving. 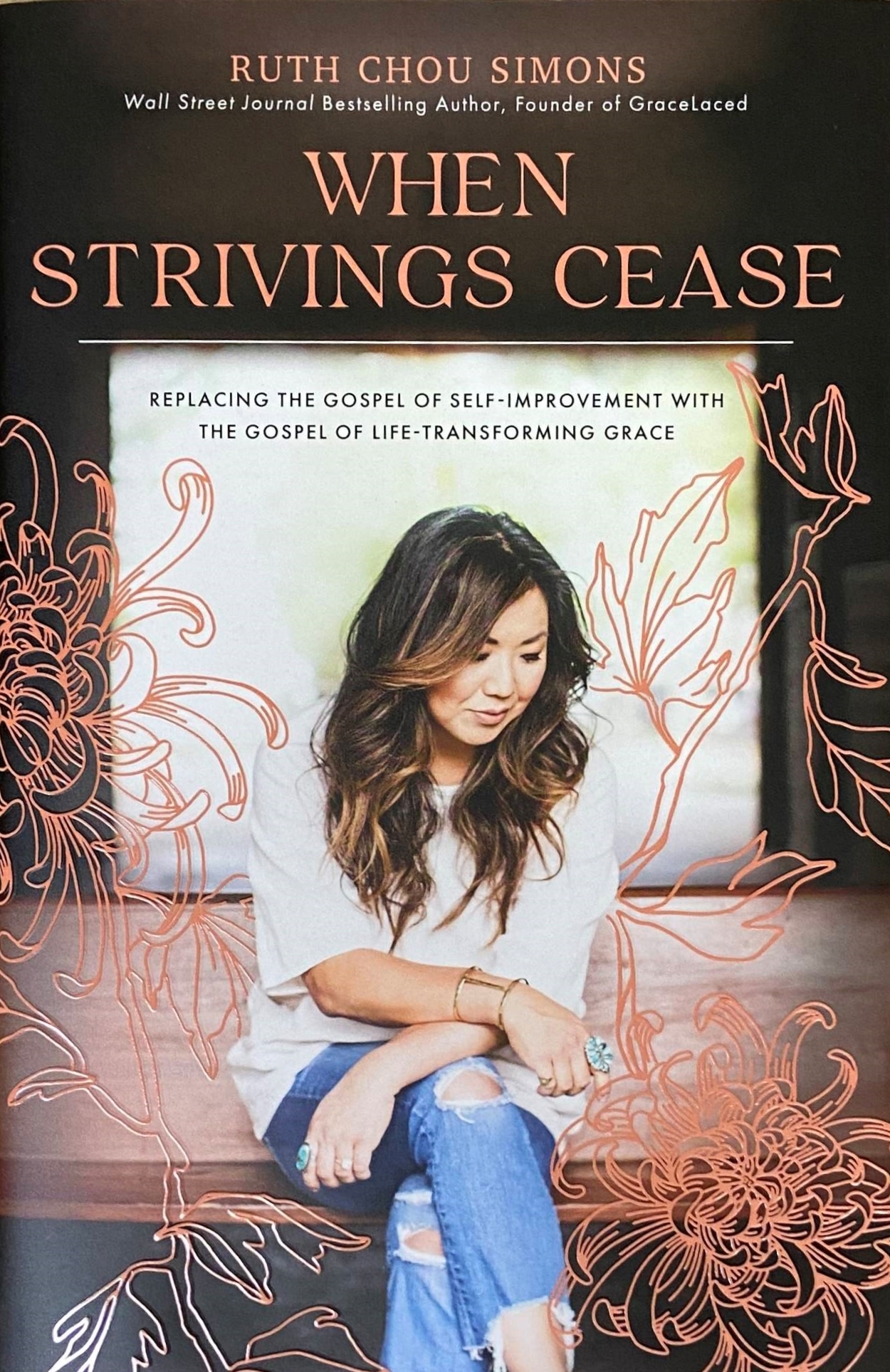 Ruth Chou Simons knows something about feeling measured by achievement, performance, and the approval of others. As a Taiwanese immigrant growing up between two cultures, Ruth was always on a mission to prove her worth, until she came to truly understand the one thing that changes everything: the extravagant, undeserved gift of grace from a merciful God.

Discover how God’s profound gift of grace and favour lets us rest from chasing approval and earning love.

Over time, my family’s efforts to turn their rags into riches inspired in my bones a gospel of self-sufficiency: Only I am responsible for my happiness and salvation… so never stop striving.

Grace that Calls Us to Rest

Ruth Chou Simon’s When Strivings Cease offers an alternative call to self-sufficiency and self-betterment. By unpacking Scripture with personal stories, Ruth invites readers to “replace the gospel of self-improvement with the gospel of life-transforming grace.” This is not a book to guilt you into getting busier to prove your worth. It is a gentle reminder to rest in the one truth that promises salvation apart from performance, and acceptance in spite of works: The gospel of grace.

What makes Ruth’s words so impactful is the fact she is also a daughter of Taiwanese immigrants. Her stories give a voice to the striving of Third Culture Kids, and how feeling lost between two cultures has caused many of us to strive excessively for acceptance, belonging and welcome.

In one chapter, Ruth describes where she is from with a prose that moved me to tears, as she so eloquently unveils the reasons for my own striving. Here is an extract:

I am from a homeland I can’t see in my mind’s eye.
I am from secrets and expectations and the right way to never let anyone down.
I am from downplayed individualism, where boys are treasured over girls with something to prove.
I am from prosperity, dreams, guilt and fear.
I am from the little red envelope you don’t deserve to the name in the book in permanent ink.

By using East Asian anecdotes involving fried rice, saving “miànzi” (face), and the pressure to chase straight As, Ruth highlights how much of her striving is motivated by her achievement-orientated, honour-shame culture. Ruth admits that her striving for acceptance left her with one of two options: “be enslaved to ever-increasing demands to achieve… or give up in defeat.” As a former Trophy Child of a Tiger Dad, I’ve known the bitterness of both. When striving became my source of approval, I learned to fear failure more than death itself. It’s an exhausting way to live.

When striving became my source of approval, I learned to fear failure more than death itself. It’s an exhausting way to live.

What’s so Amazing about Grace?

In part one of her book, Ruth invites readers to reflect on whether our upbringing or cultural lens has warped our understanding of grace and whether the gospel has become a crutch for self-improvement. Her words invited me to do some serious self-examination: Is my relationship with God marked by fear and striving, or faith and surrender?

Perhaps we may believe we are saved by grace, but an ongoing relationship with God still needs to be earned. Or perhaps we think grace is a formula to follow to escape punishment and disapproval from a demanding Father. Ruth explains if this is how we perceive the gospel, then it’s really no different to the world’s self-betterment strategies which inevitably exhaust and enslave. After all, if striving is the way to God, how can we know if we’ve ever done enough?

A Gift of Relationship

So what exactly is the “gospel of grace” and how is it different to theologies promoting striving and self-improvement? In part two of the book, Ruth explains grace is “life-transforming” because it enables rescue from sin and relationship with God. If I was to liken God to a Tiger Dad where achievement precedes acceptance, then I’ll forever be scrambling to bring home trophies, or hiding in shame and defeat. The gospel of grace reminds us that we belong to a Heavenly Father who promises us rescue and relationship, regardless of our achievements.

Ruth helped me to see that while my self-worth swings on the pendulum of “amazing” or “disappointing”, the Kingdom has a permanent category for God’s children: Appointed. In her words, “we are more than tolerated, but highly favoured; more than pardoned, but adopted as family.” The gospel of grace does so much more than save us from sin; God goes the whole way to secure our welcome as his favoured children.

The gospel of grace reminds us that we belong to a Heavenly Father who promises us rescue and relationship, regardless of our achievements.

A Gift that is Truly Free

In addition, Ruth emphasises grace is a free gift. Unlike the “little red envelopes” which remind us of what we owe, the Father’s generosity does not need to be repaid. Ruth points us to the father in the story of the Prodigal Son who waits for his rebellious son and runs out to meet him while he is still far off (Luke 15:11-32)—even though such actions would expose him to shame. Ruth writes,

Sister, the antidote to our obsession with striving… is open arms surrender to a Father who takes the shame meant for us and makes us worthy of forgiveness and love. Notice I didn’t say “finds us worthy of forgiveness and love.” The father of the prodigal son didn’t find him in that condition—he chose and declared him so. He made himself a spectacle. He absorbed the humiliation meant for his child.

Ruth is not advocating for laziness or passiveness on our part here. Christians are still called to forgiveness and good works, but we should do so from a place of gratitude, not guilt. For the mindset we must constantly “repay the gift of grace with offerings of holiness” reflects the guilt of a debtor, still striving for reconciliation with an offended God. This mentality ultimately robs us of the ability to “glorify God, and enjoy Him forever,” an attitude that reflects the gratitude of a child who delights in their relationship with a loving Father.

A Gift that Can’t be Repaid

Earlier this week, I finally caught COVID and my mum ordered me to immediate bedrest. Instead of feeling grateful for the offer of help, I felt guilty for burdening her. With each meal that arrived at my door, I felt the need to over-thank and over-apologise. To relieve myself of guilt, I offered Mum a massage voucher. She frustratedly replied: “Aiya! No need! You’re my daughter, of course I’ll look after you!”

In a painfully unproductive week with very little grit or striving, my mum’s words pointed me to the gospel of grace. I didn’t feel like I had done anything to deserve her help, but she showed up because I’m her daughter. The nature of our mother-daughter relationship makes any notion of repayment ridiculous! She loves me because I’m her child.

When Strivings Cease is an invitation to reflect on our relationship with God and to marinate in the goodness of his grace. This book reignited my affections for the gospel and served as a timely reminder that with or without trophies, I belong to a Heavenly Father who by grace welcomes me home.

First published at heidi.tai and edited with permission.

Heidi Tai is an Asian Australian writer, committed to sharing honest words from a hope-filled heart. She loves a strong coffee, getting lost in the Marvel universe and pumping 90’s R’n’B and Hip Hop beats. Heidi is married to Mikey, and together they planted Providence Church Brisbane and host ‘The Greater Story’ podcast. She shares stories about life, faith and culture at: www.heiditai.com.