Defamation is one of the most interesting areas of the law of torts (civil liability). Many of us are fascinated by the terrible things one person can say about another. This fascination goes back to the early days of European settlement in this continent and is brilliantly illustrated by this collected edition of essays about one of the first high-profile cases of libel to rock the infant colony of NSW. The case of R v Campbell [1817] NSWSupC 5; [1817] NSWKR 5 (23 October 1817) was brought by the Rev Samuel Marsden in relation to an article published in the Sydney Gazette on 4 January 1817 by someone calling themselves “Philo Free”. The author turned out to be J. T. Campbell, who at the time was Secretary to the Governor, Lachlan Macquarie. 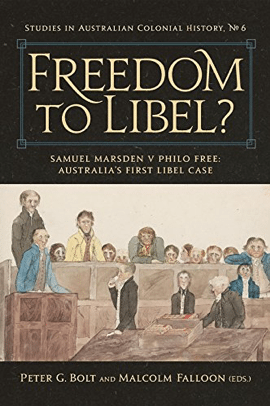 The essays unfold the background to the litigation, and its consequences, in fascinating detail. Chapter ten by Elizabeth G Moll provides a good entrance point to the events and the legal issues, and chapter one by Peter G Bolt is then a detailed exegesis of the letter in question (with necessary explanation of some its obscure sarcasm!). As with most such litigation today, there were many reasons for the animosity of the defendant towards the plaintiff, not just restricted to the specific allegations made in the published letter. Marsden and Campbell’s employer Macquarie were often at loggerheads. Differences of social class and religious commitment were some of the causes. In particular, Marsden was a representative of the evangelical wing of the Church of England, having been sponsored and supported by the members of what came to later be called the “Clapham sect”. But Macquarie, and Campbell his Secretary, represented a more anti-evangelical group within the Colony.

The “Philo Free” letter accused Marsden in effect of collecting money for a proposed South Seas mission which had never been properly expended and insinuated that he had been making money for himself by unsavoury practices such as selling “muskets and cutlasses” to the Islanders. It was also alleged that Marsden was expanding efforts to evangelise in the South Pacific while ignoring the needs of local indigenous inhabitants.

The course of the litigation, and in particular its reporting, is extraordinary. To the modern lawyer one of the most scandalous features of the events is that neither of the two sets of proceedings were properly reported. This fact may not be unconnected with the circumstance that the defendant Campbell was also the official government censor and publisher of the only official newspaper, in which the proceedings of the case which he twice lost were to be reported.

The first case, one of criminal libel, was decided by the Court of Criminal Jurisdiction, and Campbell was convicted by a majority of the members of the court. The report of the trial in the Gazette, however, suggested that the decision had been made on a technicality and hinted that the judgment was wrong. Marsden then filed a claim for civil libel in the Supreme Court, and was again successful, being awarded £200 with costs. This time the verdict was not even mentioned in the Gazette! (see p 255) To this day the official report of both cases simply uses the biased account of the first, criminal trial from the Gazette.

There are a number of other essays on the background to the litigation: the general character and reputation of Marsden, the history of the South Seas missions for which he was wrongly accused of misappropriating money, other efforts to provide support for indigenous Australians, the situation of censorship and free speech in the colony, and other topics. This is a wonderful collection for those interested in the early history of the Colony of New South Wales. It seems that many of the features of law and society in Australia even up to today can be seen in the debates and disputes at its very beginning.

Evangelicals may debate whether or not suing for defamation in the mainstream courts is a wise move. Paul encourages Christians not to go to the courts against fellow believers, in 1 Corinthians 6:1-8. Certainly, on this basis Marsden was criticised by some for taking court action (see p 244 n 77). But his situation was complicated by the fact that he was not simply an individual believer, or even a congregational pastor, but a part of the official government structures of the young colony and was being accused of misusing public funds which he was entrusted to administer. It may also be doubted that Campbell would have submitted to the authority of any shared church eldership discipline, which seems to be assumed by Paul to be the preferred venue for disputes between believers.

Justified or not, the episode is a fascinating example of the key role played by the church in the early days of Australian settlement, and the editors and authors of the essays here are to be commended for bringing a true account of the events to light.

Neil Foster is an Associate Professor of Law in Newcastle Law School at the University of Newcastle, NSW, Australia. Neil teaches and researches in the areas of Torts, Workplace Health and Safety Law, and Law and Religion. He is a member of the Editorial Board of the Torts Law Journal, and was a co-author of the 6th and 7th editions of the Luntz & Hambly Torts text, sole author of a 2014 Supplement to that book on Defamation and Wrongful Interference with Goods, and responsible for a new chapter in the 10th edition of Fleming’s Law of Torts. He is the author of Workplace Health and Safety Law in Australia (LexisNexis Butterworths, 2nd ed 2016), and an e-book published by Matthias Media, Pressure Points (2014) dealing with potential clashes between the Christian faith and recent laws. He has published a number of articles in the area of torts and WHS law, and is developing a research interest in Law & Religion. He blogs on law and religion issues at https://lawandreligionaustrali… .

As well as undergraduate and postgraduate qualifications in Law (BA/LLB from UNSW, LLM from Newcastle), Neil is a graduate of Moore Theological College (BTh ACT; DipATh Moore). He is married with 4 children, 3 children-in-law and 9 grandchildren, and actively involved in Hunter Bible Church in Newcastle, where he serves as an advisor to the Elders’ Committee.

(Neil’s comments for the Gospel Coalition Australia, as well as on his blog, represent his personal views and not those of his University.)

3 Peaceable, Gentle and Open to Reason

Mother’s Day for the Motherless