You have to admire the moxie of a conservative theologian who decides to take on JI Packer, Don Carson, John Frame, Bruce Ware, William Lane Craig, Kevin Vanhoozer and Alvin Plantinga all at once. But that’s what James E. Dolezal does in his recent book All That is In God: Evangelical Theology and the Challenge of Classical Christian Theism.

Dolezal’s case is pretty straightforward: he says recent evangelicals have failed to maintain a sense of God’s utter transcendence. While our reformed and medieval forebears saw God as eternal, unchanging (immutable), complete and undivided (simple), modern evangelicals (even Calvinists!) have muddied the water by trying to depict God as both above history and in it; as both unchanging and responsive; as both simple and social. In short, says Dolezal, they’ve embraced “mutualism”—a notion that “conceives God interacting with the world in some way as humans do.”

As Dolezal sees it, this doesn’t work logically and it confuses the way God reveals himself—progressively, through people, places and events—with who God is in himself. God doesn’t really change his mind, or move from wrath to mercy. These are God’s accommodations to our finite minds and we shouldn’t take them any more literally than references to God’s right arm or nostrils. 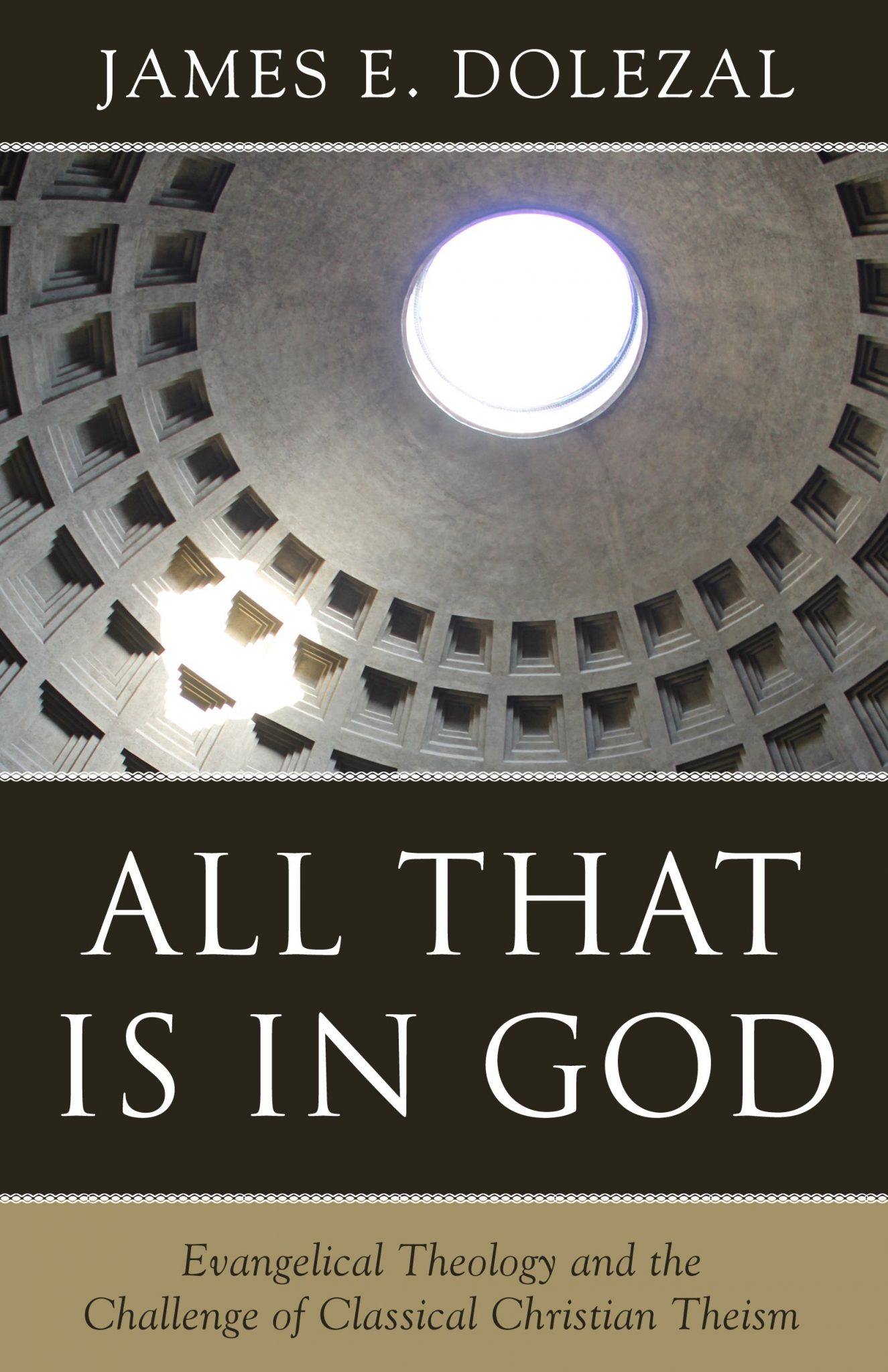 All That Is In God: Evangelical Theology and the Challenge of Classical Christian Theism

All That Is In God: Evangelical Theology and the Challenge of Classical Christian Theism

Who’s right? Here’s a brief assessment of the book and its arguments.

Dolezal is definitely right in much of what he affirms. His book does a good job commending some fundamental principles of God’s existence that really have been obscured or misunderstood in much popular Christian writing. When he insists that God isn’t a divided or composite being; that God doesn’t need us, it’s a bracing reminder that the God of the Bible is bigger than we so often imagine. Many of us have drifted into views of God that are sentimental and sloppy, and Dolezal is right to challenge us.

Dolezal is also right to take issue with the way modern evangelical/reformed theologians sometimes express themselves with regard to God’s relationship with creation. His arguments show that many in our camp are too loose with the way they talk about God; too quick to assume that God must experience space and time as we do. I, personally, found Dolezal forcing me to a deeper consideration of the distinction between the incarnation and the other manifestations of God’s presence shown in Scripture.

Finally, Dolezal takes a good stroke at some modern trinitarianism which attempts to hold the godhead together simply by social ties—or by some very vague notion of “perichoresis”. As Dolezal rightly points out, if it isn’t a real unity of essence it isn’t monotheism (ch. 6).

The Not So Good

Yet Dolezal overstates his case. Eager to stress God’s eternal completeness and self-sufficiency, Dolezal doesn’t think deeply enough about the arguments he purports to refute. For example he never allows that there might be a distinction between what God is in himself (holy, powerful, loving etc) with what he is toward us (merciful, patient, wrathful etc). In fact he—seemingly willfully—keeps insisting that the any developments in the latter category must occur within God’s very nature.

…the assumption that in God there are some attributes that belong to His essence, while there are other attributes He acquires through relation with His creatures … violates divine simplicity’s insistence that God cannot be composed of substance and accidents (ch. 4).

This is unfortunate because it is patently untrue. Dolezal is right to insist that humans can’t affect who God is in himself—“God’s glory is not actually increased when we glorify Him,” (ch. 2). Yet Scripture also makes it abundantly clear that there is a sense in which we can increase God’s glory—in the sense of his renown—by declaring his praises; proclaiming his gospel and by showing forth his wisdom before the heavenly powers (eg. Eph 1:11-13; 3:7-10; 1Pet 2:12). In fact this is the very reason we exist (1Pet 2:9).

Dolezal is right to insist that humans can’t affect who God is in himself. Yet Scripture also makes it abundantly clear that there is a sense in which we can increase God’s glory—in the sense of his renown—by declaring his praises. In fact this is the very reason we exist.

Nor is it true that God’s action in space and time is simply a matter of revealing himself to us in simple ways. By acting in the world—even through creatures—God creates new relationships with us: he becomes God for us in a new way.

Of course this is supremely the case with Christ. In his incarnation, life, death, resurrection and ascension, changes take place—not just in the life of the man, Jesus—but in God’s relationship to us through that man.

Dolezal fails to see this. He insists that the incarnation cannot be used as a template for God generally, since the changes only relate to Christ’s human nature. But the incarnation by itself destroys his case. The mission of Christ didn’t just involve Christ’s humanity, it involved the Second Person of the Trinity who was incarnate in that humanity.[1] Thus orthodox (Chalcedonian) Christology insists that it was God who was born of the virgin; God who died on the cross. The God of the Bible is both outside time and a man ruling history in heaven. Both are our God and will remain so forever.

This is not a trivial point. It is central to our hope and our salvation. If God didn’t die on the cross then, as Anselm points out, our sins have not been paid for. Our infinite debt required the infinite sacrifice of God the Son. Unhappily, however, there is not a single reference to the cross in this book.

Dolezal’s refusal to allow any complexity in God’s inner life creates some other peculiarities in his theology of creation too. If everything in God is simply “God”—his natural and necessary being—then he doesn’t have any free will. His decision to create the world, or save you and me, or to make it rain on Thursday are all just as fundamental to him as his wisdom and holiness. God cannot be himself without any aspect of creation—and so the boundary between God and the world begins to break down.

This was the position of Origen of Alexandria, who said that: “to prove that God is almighty we must assume the existence of the universe … there must always have existed the things in virtue of which he is almighty.”[2] Dolezal, likewise, insists that “a consistent confession of God’s eternity must be fearless in affirming that God is, in fact, eternal Creator” (ch. 5). As he sees it, being Creator is essential to who God is—but that’s okay because our bubble of time is eternally present in God’s infinity. God needs creation to be himself but he always has it.[3]

Dolezal thinks he’s following the classical tradition of Aquinas and the magisterial reformers here. But real classical theologians have always strained to avoid making God dependent on the world like this. In the medieval West, the scholastics were at pains to distinguish between God’s nature and his decisions.[4] Later reformers (especially the Puritans) spoke of a Covenant of Redemption, which imagined the persons of the Trinity holding counsel together to decide the course of salvation history and the parts they would play in it. As John Owen (one of Dolezal’s heroes) puts it:

Hence from the moment of [the covenant’s inception], I speak not of time, there is a new habitude of will in the Father and Son towards each other that is not in them essentially; I call it new, as being in God freely, not naturally.[5]

That “not in them essentially” is a clear contradiction of Dolezal’s argument that there is nothing in God but his absolutely simple nature. Of course, as Owen notes, these events and decisions are described “as if” they happened in time—nobody really knows how a timeless God can make a choice.

But the logical distinction between nature and choice is crucial. And, no matter what we make of the different theological ways of imagining God’s decisions, Scripture makes it clear that history really is shaped by divine decision: God the Father appointed his Son to be heir of creation and chose us in him before the creation of the world (Heb 1; Eph 1). (Those who want to read more about the significance of this should look here or here ).

Systematic theology is a great gift to the church. Done right, it helps us to see the unity of Scripture—the overarching realities to which the Bible points us. It calls us to a bigger picture of God—it teaches us to praise our glorious God who stands above and beyond all chance and change.

But it comes with dangers. Systematic theologians can be tempted to construct an ideal conception of God that leaves out parts of the Bible that don’t fit. Theologians sometimes overreact to theological errors by performing a pendulum swing that simply creates the opposite extreme. A particular danger for reformed systematic theologians is to so focus on what is ultimately true about God (his electing sovereignty, for example) that they lose the ability to focus on the nitty-gritty of his presence in the Bible’s storyline.

In Dolezal’s All That is In God we see both the strengths and vulnerabilities of systematic theology. So much of what it affirms is good and helpful. Some of what it rejects is central to the faith.

(Author postscript 11/5/2018: I notice that some social media responses have understood this review as an attack on Thomas Aquinas or a rejection of the principle that God’s essence is simple. A more careful reading, including the footnotes, should reveal the error of both)

[1] Hence Cyril’s insistence that, in the flesh of Christ, “the impassible suffers” (https://www.firstthings.com/article/2001/11/does-god-suffer). Unfortunately this kind of nuanced dual expression seems to be the very thing Dolezal is attacking.

[3] Strangely, if this were true, it would have the unintended consequence of vindicating all those Dolezal is criticising. For if God’s eternal actuality can include events that take place in time, then that would surely also be true of all the responses and changes we see on God’s part within salvation history: they too would be timelessly part of God’s eternal nature. Dolezal has managed here to reject “mutualism”, only to embrace the panentheism of Moltmann and Pannenberg.

[4] Thus Thomas Aquinas, despite what Dolezal says about him, teases out the difference between the eternal works of God that are natural and necessary and those which are consistent with his goodness but free. See, for example Summa Contra Gentiles 1.81-88 or Summa Theologiae 1.19.Q3. We might note that these distinctions have parallels in the eastern church’s recourse to the ideas of logoi or energies within God.