36 Days: The Untold Story Behind the Gallipoli Landings by Hugh Dolan

As a Christian, a historian and a military enthusiast, I tend to enjoy those books that transport my mind back to the actual period they depict. It is also a great thing if the author manages to translate a great storyline fluently and accurately to the audience. Hugh Dolan does this extremely well in his 2010 book 36 Days: The Untold Story Behind the Gallipoli Landings. 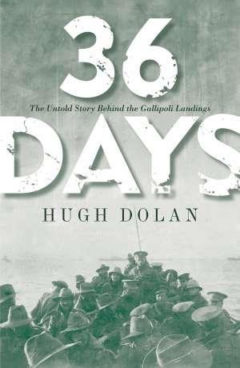 Hugh Dolan is a retired Intelligence Squadron Leader with the Royal Australian Air Force, and a post graduate of the University of Oxford. He manages to use both his academic and military background to explain the truths behind one of the most intriguing accounts in Australia’s military history. This book has gained such accolade that it has also been made into a documentary renamed Gallipoli From Above. Adding to its academic credentials, the documentary was also broadcast from Anzac Cove earlier this year as Australia marked the 100 year anniversary since the landings.

In 36 Days, Dolan takes the reader directly to the planning that came about 36 days before that fateful day of 25 April 1915. The major historical figures who appear throughout are General Sir Ian Hamilton, the spies who gathered intelligence with aeroplanes and submarines, and the British Vice Consul in Channakale, Charles Palmer.

Like most military conquests or defeats, this one began with orders, communication and intelligence. Dolan acknowledges this by taking the reader directly to the reports he has from General Headquarters, along with research he has taken from maps showing enemy positioning. His other research was drawn from war diaries and briefings that took place as the Dardanelles were searched for Turkish trenches in the cliffs. Dolan writes in detail what other war correspondents such as Charles Bean were unable to mention.

One sentence that drew me in came toward the beginning: “For the soldiers and nurses of Australia and New Zealand, Egypt had been a colour plate in a Bible, the land of Moses and the Pharaoh…”

As you read this heroic account, you find you are going along on this journey within the minds of these fascinating military personnel. As they ready themselves to search for a perfect time to deploy, the soldiers see the landscape for what it really is, and the reader begins to see this landing for what it really was in the officers’ minds. In the first chapter Dolan lays the groundwork that took place on 4 August 1914 at the Dardanelles. The intelligence gathered showed a shore landing under the cover of darkness seemed to be the best option. This plan would enable some 30,000 Anzac and British, and 20,000 French Colonials and Indian men to go to battle, but more importantly 20,000 troops to land. Unlike books that spend the majority of their time recalling the actual landings, and rehashing the same monologue that this was Australia’s greatest military disaster, Dolan spends most of his research retelling the 36 days beforehand with utter triumph. It became one of the greatest naval offensives to ever take place, along such a small, well defended cove by the Turks.

Despite the accurate ground work continually laid out through his research, the conclusion comes as quite a challenge. I can assure you, if you are like me, you will stop and re-examine everything you have ever believed to be true about these events. Throughout history, the Gallipoli landings have always been depicted as taking place at dawn. However, by the time this book reaches its crescendo it’s clear that this could not have been the case – the actual landing took place under the cover of night as a silent stealth attack in pitch darkness. Some 5500 men had actually landed before the breaking of dawn, unlike the bloodshed that is often depicted in the initial stages. In military terms, the first landing was an absolute success.

This book holds a special significance for me an ex-serving member of the Royal Australian Navy. I returned to serve in the military as a civilian for the same Officers Mess of which Hugh Dolan was a member when he was penning this book. I watched each night as he pored over his firsthand accounts, war diaries and maps with intricate detail. He told me what this meant for him, and for the generations to come. I perceived a man eager to get to the truth, and dispel all myths we had come to believe about the Gallipoli landings. This is what appealed to me as a theologian, and a Christian speaker. If we want to know our history and foundations as a nation, then we need to build on factual truth, rather than an erroneous story that becomes nothing more than legend. As preachers this is what we aim to do from our pulpits, and our places of worship, especially each time we open the Word. Our aim is to speak the truth from the facts before us. This is the same angle that Hugh Dolan takes as he re-tells this account, and encourages us to get it right from the start.