I live in Melbourne. The city once proudly boasted that it was the most livable city in the world. Not surprisingly, the boasts have ceased. I suspect that right now we rival Mogadishu as the city people least want to visit (but at least you can enter and leave Mogadishu). As we submit to our governing authorities and endure weeks of curfews and closed borders, what virtue or fruit of the Spirit is most needed by Christians? And not just Christians living in Victoria. If we were to listen to our brothers and sisters from the early church they would almost certainly commend ‘patience’.

What virtue or fruit of the Spirit is most needed by Christians? Our brothers and sisters from the early church would almost certainly commend ‘patience’.

Recently, I read The Patient Ferment of the Early Church by Alan Kreider (Grand Rapids: Baker, 2016). It’s a contribution to the ongoing investigation into how we account for the remarkable growth of the Christian church in the first three centuries. Nearly 60 years ago church historian, Stephen Neill attributed it to, “the burning conviction with which a great number of the earliest Christians were possessed” (A History of Christian Missions). While undoubtedly true, more needed to be said. 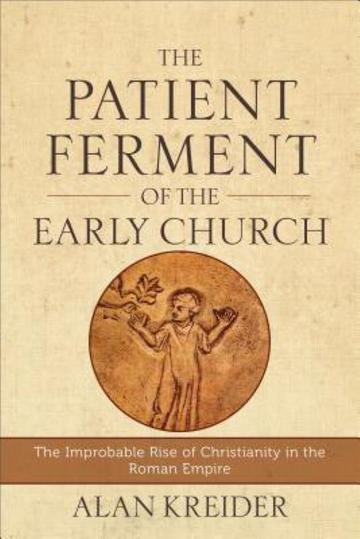 The Patient Ferment of the Early Church

The Patient Ferment of the Early Church

The background to Kreider’s thesis is the surprising fact that there are very few records of early church missionaries or evangelists. He notes that the church did not write a single treatise on evangelism. More surprising is that the growing church’s catechetical materials preparing people for baptism contain no references to evangelisation. Now, of course, Christians preached the gospel. After all, how can someone hear and believe “without someone preaching to them” (Romans 10:14). There’s evidence that Christians were gossiping the gospel (e.g. Celsus’ attack on Christianity, True Doctrine). But there is an undeniable absence of formal structures for evangelism. How, then, did the early church account for its growth? Kreider’s answer is encapsulated in the phrase, ‘patient ferment’. There are three pillars to Kreider’s argument.

First, the early church emphasized ‘the formation of habitus’. The godly lives of the believers gave the most compelling testimony to the truth of their confession. Church historians have always acknowledged the importance of the Christians’ exemplary conduct, but I don’t know of any book that explores this with the thoroughness and passion of Kreider’s. We need to remember this. I was checking a publisher’s editing of a book I’d completed. Commenting on 1 Peter, I noted that, in the context of persecution, the apostle “encourages these believers to keep their faith in Jesus and maintain integrity in life”. For no obvious reason the editor removed the reference to maintaining integrity in life. Perhaps it was considered superfluous; it’s critical to Peter’s argument.

New converts were instructed to repent and adopt the virtues of the Christian life. No effort or time was spared … preparation for baptism could take up to three years

Kreider notes the lengths the early church went to in order to maintain the integrity of the church’s witness. New converts were instructed to repent of the vices of their old life and adopt the virtues of the Christian life. No effort or time was spared inculcating these behaviours. Preparation for baptism could take up to three years, emphasizing correct living. Church services, and especially the Holy Communion, was exclusively for the saints. While we roster church members to welcome visitors, the early church rostered deacons to keep people out.

How long does it take for a life to change? Three years seems an excessive amount of time to prepare people to fully participate in the life of the church. This leads to the second, and central pillar, of Kreider’s argument. The early church esteemed the virtue of patience. It was the first virtue about which they wrote a treatise, and they wrote no fewer than three treatises on it. Christian writers called patience the “highest virtue,” “the greatest of all virtues,” and the virtue that was “peculiarly Christian.”

The Christians believed that God is patient and that Jesus visibly embodied patience. And they concluded that they, trusting in God, should be patient. They did not need to try and control events, nor be anxious or in a hurry—and never use force to achieve their ends. God was in charge of events; they knew they were not. So, they were not surprised that the church’s growth was uneven, that there were certain areas where there were concentrations of Christians and other areas where there were no believers at all.

Thirdly, and closely related to patience is ‘ferment’ (Kreider’s term). The third-century church father, Origen, attributed the growth of the church to God’s “invisible power.” It was not susceptible to human control and its pace could not be sped up. It was a bubbling energy that had immense potential. To summarise, Kreider colourfully writes:

This was patient ferment. The patient God was at work and God used not influential or powerful people but obscure fishers and hunters to achieve a huge end. As Origen spoke, the ferment was happening. It was brewing, but not under anyone’s control. It was uncoordinated, it was unpredictable, and it seemed unstoppable. The ferment was spontaneous, and it involved ordinary ingredients that at times synergized into a heady brew. They proliferated because the faith that these fishers and hunters embodied was attractive to people who were dissatisfied with their old cultural and religious habits, who felt pushed to explore new possibilities, and who then encountered Christians who embodied a new manner of life.

And the heady brew of the gospel is still fermenting, even in and through a pandemic.

It seems to me that patience is the virtue we need at this present time. I’ve been reflecting on the apostle Paul’s ‘wasted’ two years in prison in Caesarea. I don’t doubt that he was evangelising those around him, and perhaps writing letters, but Luke passes over those years without comment (Acts 24:40). Paul was probably in his mid-late 50’s. Even if all went well, his life-expectancy would be another eight to ten years, and even over that time his strength would weaken. I don’t know why the God who’d commissioned Paul to ‘go’, then told him to ‘sit and stay’ for two years.

I want open borders by October, a vaccine by Christmas, and back overseas by February. Then I remember the lesson the Lord taught our brothers and sisters centuries ago…

I’m in my mid-60’s and I figure I may only have another 10 years of the kind of health that has allowed me to minister at the pace to which I’ve become accustomed. And, of course, the older you get the more likely people will think: “No, let’s invite someone younger”. My eyesight may be fading but my used-by date has never been clearer.

So, at times I’ve felt like saying to God, “Lord, maybe some of these younger guys can afford to lose two years of full-on ministry, but at this stage in my life I can’t. So, hurry up. I want open borders by October, a vaccine by Christmas, and back overseas by February”. Then I remember the lesson the Lord taught our brothers and sisters centuries ago:

But do not forget this one thing, dear friends: With the Lord a day is like a thousand years, and a thousand years are like a day. The Lord is not slow in keeping his promise, as some understand slowness. Instead he is patient with you, not wanting anyone to perish, but everyone to come to repentance. (2 Peter 3:8-9).

Mike Raiter is the Director of the Centre for Biblical Preaching in Melbourne. He was formerly Head of Missions at Moore College and, more recently, Principal of Melbourne School of Theology. Mike spent 11 years working in Pakistan, largely in theological education. He is married to Sarah and they have 4 children (Joel, Nate, Pippa and Lauren). He is the author of over 35 books and articles, most notably the 2004 Australian Christian Book of the Year, Stirring of the Soul.