This is a really, really good book.

In a highly readable and biblical way, the author Ben Shaw does precisely what his title suggests – he gives seven good reasons for someone to (re)consider Christianity. As such, the book is also really useful, especially in our contemporary western context, where so many are moving away from the Christian faith, from Christian knowledge, or even from Christian awareness.

While 7 Reasons is the sort of book you might do well to read for yourself, it would do the most good if it found its way into the hands of vaguely interested non-believers or “former believers”. 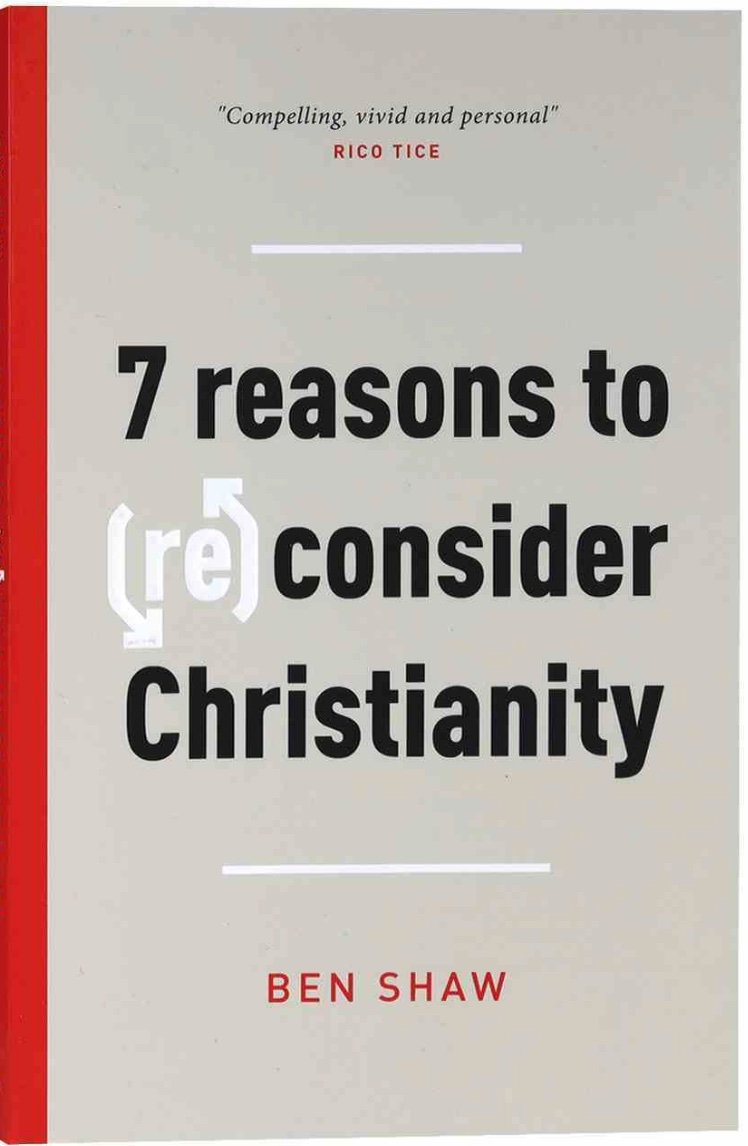 And this is exactly what the author hoped would happen. The first paragraph of the book says as much:

‘I don’t know how you have ended up holding this book in your hands, but whatever the reason, it was written for you: the inquirer, the curious, the inquisitive, the sceptic, the atheist, the agnostic, and even the doubting Christian. Whoever you are, I’m glad you’re here.’ (p. 7)

7 Reasons would do the most good if it found its way into the hands of vaguely interested non-believers or former believers.

The book’s seven reasons to (re)consider Christianity are indicated by the book’s chapter headings:

Chapter 1: Because it’s worth thinking through what life is really all about;

Chapter 2: Because Christianity is a lot more intellectually credible than you might have assumed;

Chapter 3: Because Christianity is about life to the full;

Chapter 4: Because Christianity gives a compelling answer to the question “What’s wrong with the world?”;

Chapter 5 Because Jesus is arguably the most influential person in history;

Chapter 6: Because the death of Jesus is surprisingly very good news for you;

Chapter 7: Because, if Jesus really did rise from the dead, then it would confirm everything.

As these headings suggest, Ben is engaged in a work of both evangelism and apologetics.

It is a work of evangelism.

It focuses on Jesus and the gospel. The first chapter seeks to capture people’s attention by raising a question that almost everyone must surely ask at some time or another – what is life all about?

The next chapter then tries to dismantle one of the central defeater beliefs for the faith – that it’s unintellectual.

Ben then starts to work his way through the gospel – he addresses the good God’s good creation (chapter 3), then human wrongdoing (chapter 4), before looking at the life, death and resurrection of Jesus and their implications (chapters 5–7).

It is also a work of apologetics.

Traditionally, Christian apologetics was understood to be a defence of the truth of the Christian faith. Alister McGrath insightfully reworked the definition almost thirty years ago in his seminal work Bridge-building: Effective Christian Apologetics. He defined Christian apologetics as ‘a presentation and defence of its claims to truth and relevance’ (italics added).[1] McGrath highlights that Christians can be proactive, not just reactive, in recommending the Christian faith. He also appreciates that in recent decades we should seek to show that Christianity is not only true but also relevant (that is, that it is appealing and important).

Ben’s book is an example of this sort of apologetic.

It can be used proactively to recommend the Christian faith. It is also concerned with the appeal and importance of the faith (that is, its perceived relevance) and its truth.

Ben’s writing is easy to read without being simplistic.

It is a style to which anyone from an occasional reader to an academic could relate. This style probably stems from his personal experience of ministry. For those who don’t know him, Ben engaged in Christian work for about forty years. His early years were spent touring as a guitarist in the Christian rock band In the Silence. He subsequently studied at Moore College in Sydney. Over the years, he has worked in Australia and the United Kingdom with people from a broad cross-section of society – both churched and unchurched.

Ben’s writing is easy to read without being simplistic.

Thus, it comes as no surprise that his book has such potentially broad appeal.

The power of stories has often been remarked upon in recent years. Ben’s book contains many memorable stories and illustrations. In fact – powerfully, sadly, and ultimately joyfully – part of Ben’s own story is set out in the ‘P.S. Why I’ve (re)considered Christianity’ chapter near the end of the book.

Here Ben reveals that after starting work on this project, he was diagnosed with cancer.

Over the next few years, the disease was treated, but also it progressed. The impact? ‘In short,’ says Ben, my cancer has forced me to reconsider the integrity and credibility of my beliefs.’ (p. 134) His conclusion: ‘Yet in the end, far from having been shaken, I can honestly tell you that having this life-threatening illness has actually sharpened and increased my faith.’ (p. 134).

Thus, as Ben says, the book is not simply academic. It is also very personal. (As some will know, Ben passed away in June 2021, a few weeks after the launch of his book at which he spoke.)

What is the end-game of the book?

It concludes not with a “pray this prayer to become a Christian” prayer Instead, it finishes with three suggestions: talk to a knowledgeable Christian, find a Bible-teaching church that also runs introductory courses on Christianity, and start reading the Bible, beginning with one of the New Testament Gospels.

What doesn’t this book have?

Well, clearly, in a short work such as this, much is left out. All topics addressed could have been explored in greater depth. But increasing the length would have made it less accessible for many readers. Its relative brevity is a strength.

It could be noted that the book does not explore one of the biggest apologetic issues in the contemporary world – that of gender. Could that have been added? Possibly. But it would not have been easy to write a short, snappy chapter on that. If gender is an issue for someone you know, perhaps Rebecca McLaughlin’s similarly admirable but slightly longer apologetic work Confronting Christianity[2] could be better.

Paul himself adopted different approaches when speaking to Jews in Pisidian Antioch (Acts 13) and Greeks in Athens (Acts 17). However, I am sure that anyone who reads Ben’s book will be able to think of many people in their lives – family members and friends – to whom his book could usefully be given. The long list of luminaries who have endorsed the book – for example, John Dickson, Rico Tice, Rebecca Manley Pippert, Amy Ewing-Orr, Vaughan Roberts, and Phillip Jensen – highlights how widely it is appreciated and how broad its appeal.

I will be buying several copies with a view to giving them away!

Stephen Liggins is Senior Associate Minster at Anglican Churches Springwood; a semi-regular guest lecturer at Sydney Missionary and Bible College; a writer; and a keen sportsman. His latest book, The Good Sporting Life has been shortlisted for the 2021 Australian Christian Book of the Year and is available at www.matthiasmedia.com.au. See TGCA review here.

4 Why We Can’t Sign. Two Evangelical Ministers Respond to the Ezekiel Declaration

Our Problem with Menial Labour