He is no fool who gives up what he cannot keep to gain that which he cannot lose.
(Jim Eliot)

‘Itota beyæ, tænonamai’ [On behalf of Jesus, do not spear.]
(A phrase synonymous with the gospel for the Waorani)

There are few stories in the English-speaking evangelical Christian world that have had greater impact than that of the Auca Five. Five young North American men, full of the promise and potential of the post-WWII generation, speared to death in equatorial Ecuador as they sought to bring the Gospel of Christ to a hitherto unreached, reclusive, jungle tribe.

Their story has launched thousands of missionary careers, gathered millions of dollars into missions work, exponentially expanded the work of Wycliffe Bible Translators

Their story has launched thousands of missionary careers, gathered millions of dollars into missions work, exponentially expanded the work of Wycliffe Bible Translators and the associated Summer Institute of Linguistics, and inspired thousands of evangelicals.  None of this is exaggeration. This is a truly significant evangelical story, and this book is a superbly written, sustained, mature reflection on important themes in missiological encounter and enterprise. 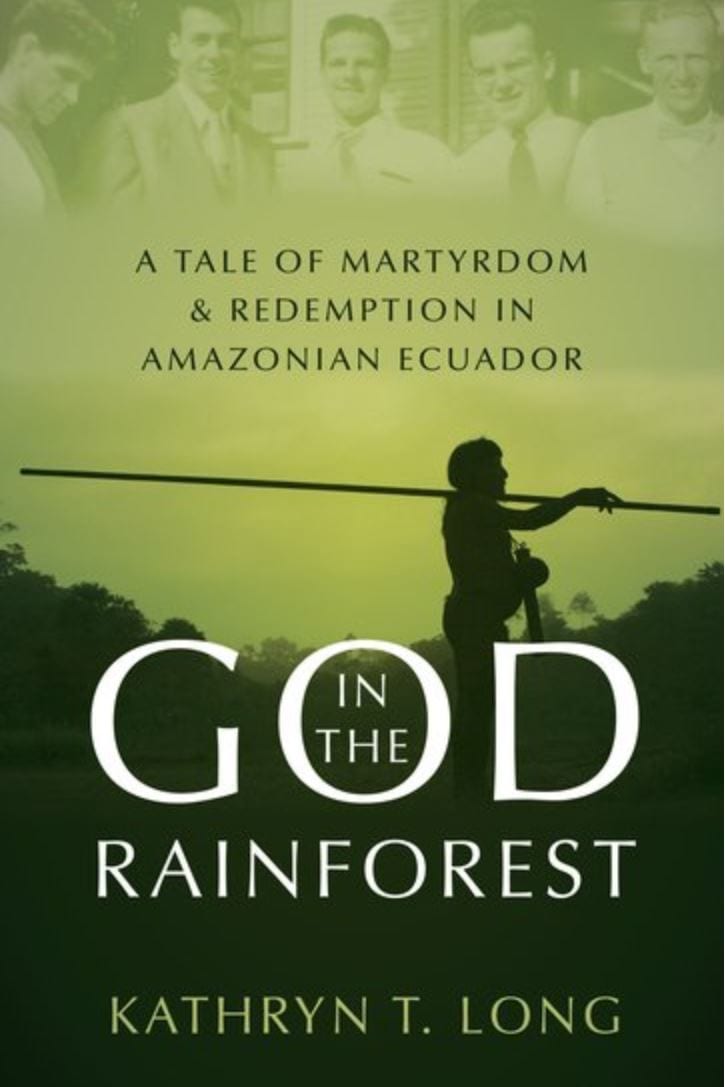 God in the Rainforest: A Tale of Martyrdom & Redemption in Amazonian Ecuador

God in the Rainforest: A Tale of Martyrdom & Redemption in Amazonian Ecuador

The five were Jim Eliot, Nate Saint, Roger Youderian, Pete Fleming, and Ed McCully—speared to death on 8 January 1956 on the banks of the Curaray River within days of first contact with the feared Waorani.

Recently retired Wheaton College Associate Professor Kathryn Long immediately introduces the reader to the complexity of this often simplified tale. The people were the Waorani [people]. Auca was the derogatory term used by the majority Quicha to refer to the feared ‘other’. The English-speaking evangelical world was and still is slow to pick up this nuance. Indeed, an important theme of this book is the failure of the church to appreciate the complexity of cross-cultural work. This is an ongoing challenge and a theme returned to in many and various places throughout the book.

The story of Operation Auca, as the five called it, occupies only a small section at the beginning of this study, which proceeds in the chronological order of events. Long describes the total commitment of the men and their wives and families, an admirable feature of their evangelical missionary culture. But she also shows how they overestimated their abilities and preparation, and their capacity to accurately interpret the communication and actions of the culture they were encountering. These led directly to their deaths. There’s much throughout the book to learn about preparation for mission.

Long describes the total commitment of the men and their families. But she also shows how they overestimated their abilities and preparation.

Long’s account moves swiftly to the response to the men’s deaths. She mirrors the response of the American press and public—giving the reader a sense of how quickly and completely this story captured the attention of the nation. Life magazine put it on their cover and claimed exclusive rights to the ongoing story. Time and Newsweek carried the story, Readers Digest would commission an account; and of course it featured in all the major Christian publications.

Long also describes the role of mission administrators in getting the story out there in order to generate publicity and funding, aided by media companies eager to cash in on the story. Jim Eliot’s widow, Elisabeth, was withdrawn from Ecuador and ensconced in a New York hotel for some six weeks by Harper Collins for the specific purpose of writing and publishing Through the Gates of Splendour. It was, ‘…a brief book that created its own world,’ selling 175,000 copies within eight months.

The gap between the North American supporting churches’ view of missions and what was actually happening on the ground is constantly highlighted. Administrators and missionaries both felt constant pressure to communicate in terms of conversions or baptisms, or progress of Bible translation. However the reality of their work was slow, patient, relationship-building, cultural observation, language learning. It would take decades before any Scripture in the Wao tededo language was ready to be published. Churches today still don’t get this, and this bifurcated perspective of missionary endeavour needs to be corrected. This book contains clues as to how.

The reality of their work was slow, Churches today still don’t get this, and this bifurcated perspective of missionary endeavour needs to be corrected.

The cool reception to Elisabeth Eliot’s later book, The Savage, My Kinsman,  is instructive. Long shows how the North American public was not interested in the human face of the savage Waorani—here, described with sensitivity and pictured walking hand-in-hand with Jim Eliot’s young daughter. They were inspired by stories of young, white, college-educated, heroic martyrs dying to bring the gospel to the savages. They were not so interested in learning more about the humanity and nobility of those same jungle peoples. Churches still want their heroes and villains. We still find it difficult to dive into the complexity of what it means to truly love our neighbours. This book helps us consider what deep cross-cultural neighbour love might look like.

A maxim of the missionary world is that, ‘our greatest conflict comes from other missionaries.’ This book pulls no punches in describing in detail the difficulties between Rachel Saint and just about everyone else who had to work with her. Long helpfully explores the differences of personality, theology, missiology and linguistic-skill-level between Saint and Elisabeth Eliot— honouring both, and telling their stories with compassion and fairness in the process. We may read it as a great tragedy (‘why can’t Christians just get along?’) but Long’s sensitive account helps us to appreciate the brokenness of the clay jars that carried gospel treasure to Ecuador. Individual strength of will and leadership vision are often the focus in our world, but this book makes us wonder what might have been if that strength of resolve had been redirected to a pursuit of humility and the priority of working with others.

The team was large and multidisciplinary. Long gives us intimate insight into the stories of several key members: Dayomæ, the first Wao language helper and a leader in her own right; Catherine Peeke and Rosi Jung, linguists; Jim Yost, anthropologist. The story of each repays careful reading.

Finally, Long helps us explore the complexity of issues surrounding indigenous peoples. She dives into land rights, environmental concerns versus fossil-fuel resource-development, the history of the Catholic encounter with the Waorani, the divergent paths taken by various Waorani groups in relation to assimilation with the outside world, the complex work of orthographic selection and Bible translation for a non-literate culture. Many parallels exist for engagement with indigenous peoples across the world. There is a great deal to learn from this erudite volume.

Long helps us explore the complexity of issues surrounding indigenous peoples. There is a great deal to learn from this erudite volume.

In her concluding chapter Long reflects on the ongoing ambiguity of any Christian future identity for the Waorani. Her book makes it clear that missionary efforts and their encounter with the Christian gospel assisted the Waorani to break their culture’s destructive cycle of revenge violence (itota beyæ, tænonamai) but subsequent generations found it difficult to maintain and grow Christian identity in the face of powerful economic and other forces. What role will increasing literacy and having the Scriptures in their newly written-down language have on their culture? What role does the rest of the church have in walking alongside them? Their story, like those of many, many other indigenous peoples, is still unfolding. Read this account and see if you can resist finding sober hope for the future.

Wei-Han Kuan is the State Director of the Church Missionary Society in Victoria. His role consists of overseeing the work of the branch; raising up
new missionaries and the prayer, care and finances to support them;
interviewing missionary applicants and visiting missionaries on
location.