““After reading a new book, never allow yourself another new one till you have read an old one in between.”“All that is not eternal is eternally out of date.”(C.S. Lewis)

In the opening message to his readers, Dr. Helmut Thielicke, who steadfastly opposed the Nazi regime of his war-torn homeland, and remained staunchly independent from the German National Church, explained the original context of the 11 sermons on the Lord’s Prayer; which form the contents of this book:

These sermons, delivered to congregations in Stuttgart, were addressed to people who continued to assemble throughout the horrors of the air raids, the declining days of a reign of terror, and finally through the period of total military and political collapse and the beginning of the occupation [of the allies].[1] 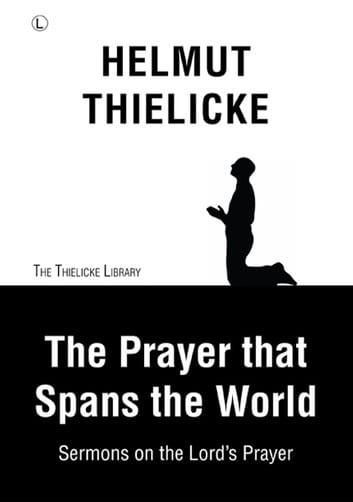 He began his sermons in one of the few churches still left standing in Stuttgart. Shortly when that building collapsed into bombed-out ruins, and there were no other churches left, they were concluded in a church hall; the only building that remained which was large enough to hold his congregation. Of the people he preached to, Thielicke remarked:

[I] saw on those faces the torment of doubt and despair, the hunger and thirst for a valid comfort and encouragement that would stand the test of hours of work, in hours spent in underground shelters, suffering agonies of body and mind.[2]

If the Lord’s prayer was ever in danger of becoming a domesticated liturgical leftover, in this life-and-death context, Jesus’ foundational teaching on Christian prayer spoke into the reality of the world as it was then—and always has been: a world that rests in God’s hands and, thankfully, not ours.

Jesus’ foundational teaching on Christian prayer spoke into the reality of the world as it was then—and always has been: a world that rests in God’s hands and, thankfully, not ours.

The Lord’s Prayer is truly the prayer that spans the world: the world of everyday trifles and universal history, the world with its hours of joy and bottomless anguish, the world of citizens and soldiers, the world of monotonous routine and sudden terrible catastrophe, the world of carefree children and at the same time of problems that can shatter grown men.[3]

Thielicke’s sermons provide us with a powerful challenge and encouragement in our own time of desperate need. Our hope is in God, and not in ourselves or our own efforts:

There was not a single question that we could not have brought [to the Lord’s Prayer] and not a one that would not have been suddenly transformed if it were put in the form of a prayer.[4]

Faith in Christ … Not Man

Thielicke well understood and passionately believed and preached this truth. As far as he was concerned, the devastation of the Second World War all but ground to powder any remaining naive twentieth century fantasies about the power and progress of humanity. The horror of war proved our desperate need for the gospel of Jesus:

…any kind of phrasemaking and glorification of the world was ruled out. Here only the whole truth and the naked truth can stand; only the centre of the message of the gospel of Jesus Christ can make us free… [5]

In his opening sermon, Thielicke faces squarely the existential emptiness that many intellectuals and even theologians had embraced in the fall out of Nietzsche’s announcement of the death of God. Prayer had been reduced to psychological self-talk; like children lost in the woods, “comforting themselves with the sound of their own voices.”[6]

But Jesus alone teaches us to pray to ‘Our Father in Heaven’: to One who speaks to us; to a loving God who we could never have imagined, and who makes us His children.

Jesus Christ … alone, in His life and His death, is the guarantor that there is a Father, that God is nevertheless at work in this cruel, hard, and fatherless world, building His Kingdom of mercy in the secrecy of the cross…Only in Him can we ever know the secret that the Father’s voice is really and truly calling our name in the dark forest … Jesus gave us this prayer and [as our Great High Priest] prays along with us…and makes our own prayers valid and fit for Heaven [cf. Hebrews 2:10-18; 10:19-25]. We should all be orphans were it not for Him. There would be no one to hear us if He had not opened the gates of heaven…But now we have a Father…as long as we can say in the name of our brother Jesus Christ: Abba! Father![7]

‘Your Will be done, Your Kingdom come.’

Thielicke asserts that Jesus must show us how to pray because, “we do not know what to pray for … for the very simple reason that in the last analysis we know very little about our real needs, about what we lack and what we need.”[8]

When the friends lower their paralysed friend through the ceiling to Jesus, their great desire is for Jesus to heal him. But Jesus’ own priority is expressed in the fact that He first addresses the more serious issue of his sin (Mark 2:1-5)—a contrast that Thielicke sees as symbolic for much of our praying:

[We think] our whole happiness depends on having our own will … [but] all the while we are protesting, we grow more hungry and empty. For no man, no matter if he has tried it a hundred times, has ever yet found happiness in pursuing his own will.[9]

Meanwhile, God’s will includes, but is bigger than His will for individual believers. It is His will and purpose for the whole of creation—a will that cannot be frustrated:

…as men turn away from God and go reeling on in the drunkenness of their own misery so God’s dominion on earth mysteriously goes on growing on earth…God’s sovereignty rules in power above all the rebels and usurpers, bringing His great and ultimate plan for the world to fulfilment.[10]

Through Jesus, we now come to our Father in confident assurance that ‘His will being done’ is good news for a world gone wrong, and good news for us!

…Jesus Christ who has promised that with those who love God everything works for good…Praise to thee, O God, that we can bury everything, yes, everything, in Thy will, our Father! [11]

Cynical critics of the Christian faith sometimes describe praying Christians as ‘God botherers.’ Surely, it is asserted, if an all-powerful God really did exist, he would not be concerned with petty human concerns. But the god that is not believed in here, is an imagined god; an idol. For, as Thielicke points out, the one true and Living God displays His greatness,

…in the fact that He condescends so low. His omnipotence is surpassed only by one attribute: His love. And that love comes down to those who cry out for it … Of course we praise Him who holds the sun and the stars and the firmament in His hands. But for us, He was at His greatest when the sun was darkened, and as God He stooped so low that He took upon himself our human death in the death of the Crucified…In the lowliness of the cross of Jesus Christ lies the supreme greatness of God.’[12]

Apart from God we have no life: we are helpless; we are condemned. But the God who made and sustains us in every moment of our lives, comes to us and is reconciled to us in His Son—who teaches us to ask in confidence: for our daily bread, (cf. Matt 6:11 cf. 7:7-11), for forgiveness, strength in temptation and deliverance from the Evil one (Matt 6:12-13).

We really do not need to pretend we are anything other than what we are…God wouldn’t believe us anyhow. This is why He also rejects our works righteousness and calls it hypocrisy, because this is only doing something outwardly; something different from what we are within.[13]

Because He has given us the greatest thing, you can come with the smallest things.[15]

We can entrust this present day to the Lord because the future and the last day belong to Him … Because He has given us the greatest thing, you can come with the smallest things.

Jesus who gives us this prayer is our Saviour who died and was raised again for our redemption; to give us a new life to live: the life of love. Only those who know God’s forgiving love for themselves will love and forgive others in the same way. When we meet Jesus, we are brought home to the Father; this is our only hope, and it is a sure one!

…when [a person] comes to Jesus of Nazareth…he knows: ‘Here is one who treats me as His brother! Here is one who sees me not only as a sinner, a bundle of nerves, a burden to others, an erring child, but nevertheless a child, and nothing less than a child of the Father, whom He wants to save by the sacrifice of His life and bring back home to His Father’s house.[16]

The longer we live as God’s children, the more deeply we become aware of our struggle with sin and against evil—ultimately against the Evil One. And the more God proves the all sufficiency of His grace towards us. In Christ and His death and resurrection God has won the victory over sin and evil, once and for all.

Never will we regret it if we choose the way of the cross in the hour of temptation, for it is the way of the Master (Matt 4:1-11). In every case God is richer than the Devil is evil; and none who has ever followed Him has ever regretted the “rack of pain and sadness.”[17]

The Prayer that Spans the Wworld and the Whole of Life

Life is difficult and challenging; our struggle with sin is real, and the world we live in confuses and frightens us. Thielicke’s book is a wonderful reminder of the incredible privilege; and the deep comfort we have as dearly loved children of our Heavenly Father. He has given us His Son who teaches us how to pray with words that a child can memorise—words sufficient for the needs of the whole world and for the course of our entire lives. This book led me into prayer, because it pointed me to the Son in whom I know the Father’s love.

…we must learn to speak with our Father. And that may take a long time, perhaps a whole lifetime of praying the Lord’s Prayer. We must learn to stand as it were by the side of our brother Jesus, who is praying along with us, testing this prayer and learning from experience that He really does give us our daily bread and forgive us our sins and really can give us a new heart, a heart that is able to forgive others- before it begins to dawn on us that we have a Lord who is rich and good and generous and inexhaustible beyond all measure, whose is “the kingdom and the power and the glory.”[18]