I am profoundly grateful for this book.

I’m grateful to Anna McGahan for writing it. I’m grateful for the wild, riotous, chaotic, surprising, longing-and-joy-and-grief-and-renewed-joy-filled story it tells. I’m grateful above all for God meeting McGahan, rescuing her, and working in her to set her free.

I’m grateful to Anna McGahan for writing it … I’m grateful above all for God meeting McGahan, rescuing her, and working in her to set her free.

At one level the story of Metanoia could be told simply—perhaps even a little predictably. A young actress engaged in a headlong and self-destructive pursuit of success and excess has a dramatic experience of conversion to Christian faith. 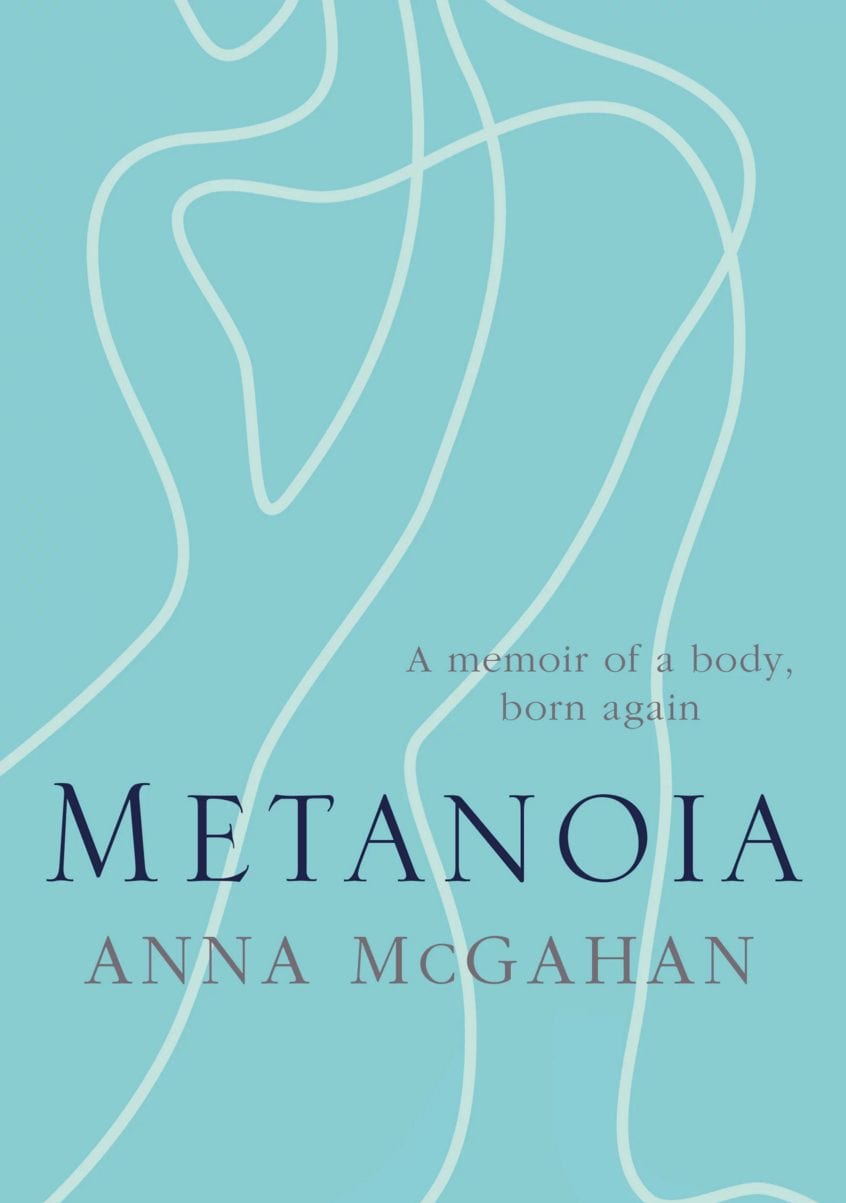 If you want the soundbite version of McGahan’s story, think Kanye—but with a white Australian woman as Kanye.

And it is that—sort of. But it is far more beautiful and complex than that too. As McGahan repeats several times throughout the book, the simplicity lies on the other side of the complexity. And it’s this complexity that makes the book and the story it tells so gripping and affecting.

Make no mistake, Metanoia is an affecting book.

As I read, I frequently found myself clutching the book on the brink of tears—if not tumbling over into barely muted sobbing or outright weeping. Reflecting her craft as an actor, the book effortlessly traverses the emotional landscape of a singular and yet broadly resonant human life: tragedy, melodrama, comedy, tragicomedy, lyric poetry, epic.

The real secret to the beauty and affecting power of Metanoia, however, is the story it tells and the human life—or, rather, the human body—that bears that story along. It’s a story that surges in on you as a reader, like waves on a beach. Unevenly spaced. But unrelenting. And undeniably powerful—especially in its gathering momentum.

There’s a reckless energy to each of the story’s seven major sections.

The Body is a Marketplace

The first, long section—“the body is a marketplace”—tells the wrenching story of how McGahan flogged, bent, used and abused her body from her childhood onwards.

Testimonies like McGahan’s can have a tendency to skew everything toward the conversion story. Only the most dramatic moments are produced, and only then as illustrations of a moral that feels retrofitted to the story. The explicit “Point” eclipses the particular and the private aspects of the story.

But here, the stories themselves do the work. McGahan’s telling of this part of her life unfolds gradually and organically. She neither over-dramatises nor romanticises her past. The picture she paints is painfully honest and real—the depths of the imprisonment she was experiencing are only exposed later.

Particularly poignant in this section is the way she relates the struggle between the highly sexualised (and sexually confident) public persona arising from her role in the TV series, Underbelly, and her romantic flailing offstage.

The Body is a Sanctuary

McGahan’s conversion experience (and subsequent Christian life) sounds thoroughly (and suspiciously, no doubt, to some readers) charismatic. It is also a powerful reminder that God is gloriously free to work in ways that veer sharply away from the rules we try to work out for him. As I reflected on this I was reminded of a Nepalese church-planter I know who, when asked how people usually come to faith in his context, explains—as if it were the most ordinary thing in the world—“God miraculously heals them or sends them a vision, then they find some Christians and hear about Jesus.”

For her part, McGahan freely admits that much of what she experienced was out of the ordinary and unexpected. And she shows how, alongside these strange interventions, God was also working through ordinary Christians to challenge her unexamined but deeply-held reasons for refusing to consider faith in Christ. While supernatural experiences played a part in piercing that self-enclosed world, it was the strange normalcy of the Christians she met that opened her to faith. I found myself moved to tears of hope as I read this.

While supernatural experiences played a part in piercing that self-enclosed world, it was the strange normalcy of the Christians she met that opened her to faith.

Mindful of her readership, McGahan here begins to intersperse her memoir with some insightful reflections on her body and sexuality. These become increasing complexity as the book progresses—yet shine with a glittering simplicity and beauty. They may not be perfect—but they are gracious and winsome. I’m convinced personal reflections like these will be increasingly important to a world that sees Christian ethics as both strange and harmful.

The Limits of the Body

The next two sections are far shorter, focusing on the body as a broken jar of clay and the body as a tent—two aptly chosen images of the temporary and incomplete quality of Christian living.

The former of these two sections is harrowing and moved me to outrage over the hypocrisy of the church and the failure of Christians (like me).

In the other section, McGahan relates the quite stunning way God used an unsettled season of her life to heal and guide her—and to teach her that one does not live on bread alone. As she moved back and forth between the creative communities in Melbourne, Sydney, Adelaide and LA, McGahan comes to see how ordinary Christians had played a part in her own salvation—a realisation that becomes the key to her own sense of calling.

The final three sections describe God’s ongoing work in redeeming and liberating McGahan’s life. This work carries her through a gradual discovery of community and friendship; and also a new friendship with her own body. It enfolds her longing for (and eventual) marriage and dramatically culminates in her pregnancy with and the birth of her first child.

Although less intense in some ways than the previous sections, McGahan’s story here displays the unvarnished, raw, unfinished—and yet somehow still joyful—texture of the Christian life. Reading the process of her maturing made me wince at times, but it also made me laugh, worship, and cheer for her.

One of the things I’ve been sitting with since I finished Metanoia is how this unique story about a unique young woman is at the same time the common story of Christians of my generation. And that’s not just because she listens to podcasts and watches Netflix!

In Anna McGahan and her story, I see my own friends and peers. I see emerging Christian leaders with whom I have the privilege of working. The more estranged Australia becomes from its Christianised past, the more stories like McGahan’s will need to play out—along with, no doubt, some weird and confronting parts. These stories will also need to be told—especially if they, like this one, can bear witness to the love of the Father, the compelling beauty of Jesus, and the transforming power of the Spirit. They give personal substance and weight to a lived apologetic for the Christian way.

As I say, I am profoundly grateful for this book. I praise God that it was written, and I pray it is widely read.

Chris Swann studied English literature and molecular microbiology as well as playing bass guitar in a heavy metal band before studying theology at Moore College in Sydney. His PhD focused on discipleship in Karl Barth’s late doctrine of sanctification. He works as Director of Training with City to City Australia and teaches ministry at Ridley College in Melbourne, where he lives with his wife, Natalie, and their two kids.