Let me make things simple. If you love C.S. Lewis—specifically, if you love the Narnia books—I think you will very much like Susanna Clarke’s novel Piranesi. If you need a break from our dreary-yet-furious present and want to think about things that are true, honourable, just, pure, lovely, commendable and excellent (c.f. Phil 4:8) then this is the book for you.

If you need a break from our dreary-yet-furious present … then this is the book for you.

Piranesi is a difficult book to describe, however. The name originally comes from Giovanni Battista Piranesi, the Renaissance printmaker famed for his fantastical depictions of vast vaulted dungeons (see above, for example). When I was studying architecture many years ago, I pinned photocopies of his Carceri series above my desk for the feeling of immense space and dark mystery they conveyed. 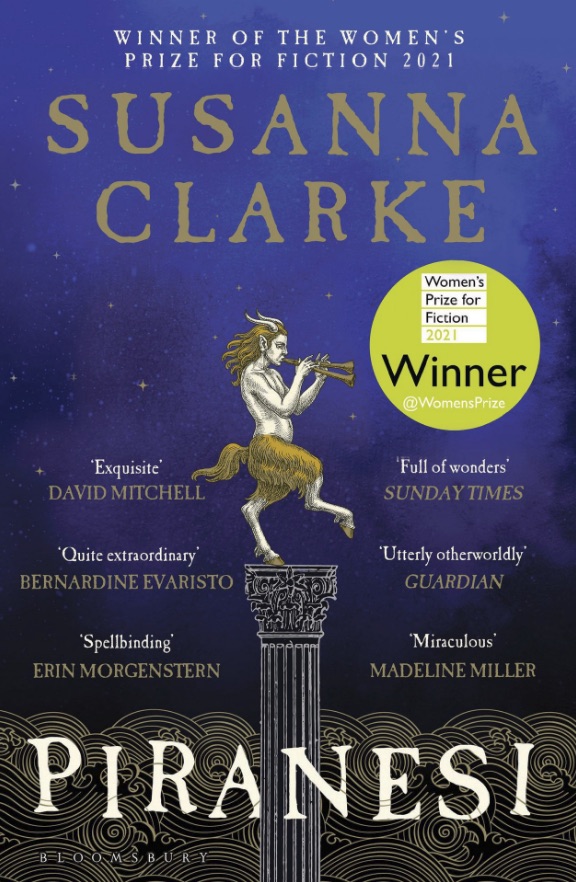 I assumed that this book would be about him—that Clarke, following the pattern of her celebrated debut novel, Jonathan Strange & Mr Norrell (an alternative Napoleonic era England where magic has reemerged), would give us a fictionalised version of Italy where Piranesi’s dungeons were real. But I was wrong. Although there are connections to the historical Piranesi, this is a very different sort of book, with a very different sense of mystery.

The Beauty of The House

Clarke’s Piranesi, the narrator and protagonist of the book, is a man living a near-solitary existence in series of endless classical hallways which function as their own world: there is a sea full of fish and crabs that surges through the lower storeys; there are clouds, stars and sunlight in the upper reaches; there are birds that fly and roost in the spaces between.

And, lining the halls themselves, there are statues: statues of humans, giants and animals, a woman carrying a Beehive, a hall of minotaurs, two kings playing chess, a faun holding a finger to its lips. The statues are grouped according to a mysterious taxonomy and appear in various degrees of repair. But to Piranesi himself, they are “perfect, eternal and not subject to decay.”

Piranesi perceives The House as if it were the source of all good and all delight—as if it were a cypher for a certain other capitalised Entity.

As you might guess from that summation, Piranesi’s world seems to be something like a storehouse of platonic forms. But it is not quite that—or rather, it is more than that. “The House”, as Piranesi calls it, has a life of its own and an influence of its own. Sometimes that influence seems the same as the “Wood between the Worlds” from The Magician’s Nephew (and this is by no means the only connection to that book). More generally, Piranesi perceives The House as if it were the source of all good and all delight—as if it were a cypher for a certain other capitalised Entity: “The Beauty of the House is immeasurable; its Kindness infinite,” he writes at the very end of the book.

I can’t really say too much more about the story without spoilers—although in some ways the plot is a fairly simple one. Clarke has gloriously exemplified Lewis’s own belief that striking images are more important than dramatic development:

… plot, as we call it—is only really a net whereby to catch something else. The real theme may be, and perhaps usually is, something that has no sequence in it, something other than a process and much more like a state or quality. Giantship, otherness, the desolation of space. [1]

What then is Clarke catching in her net? Wonderful things: mystery, beauty, innocence, kindness, compassion, joy, faith and friendship. Susannah Clarke has succeeded in creating a work that is not only subtly connected to the worlds of Lewis, but which is also imbued with their spirit. The House is a Lewisian world where joy and goodness have the best lines and the final say, and where forgiveness is possible because The House can be trusted to provide justice. It is a reality where nobility and beauty lie behind the desperation and sadness of our own world.

An old man passed me. He looked sad and tired. He had broken veins on his cheeks and a bristly white beard. As he screwed up his eyes against the falling snow, I realised I knew him. He is depicted on the northern wall of the forty-eighth western hall. He is shown as a king with a little model of a walled city in one hand while the other hand he raises in blessing. I wanted to seize hold of him and say to him: In another world, you are a king, noble and good! I have seen it!

The novels of C.S. Lewis have spawned a thousand fantasy writers and world-builders, but this is the first time I have seen anyone capture the redolence of his fiction. How has Clarke managed it? My gut instinct tells me that it could only have happened by her becoming a Christian—by her coming to believe in the same real world of grace and wonder that Lewis believed in.

Clarke endured almost a decade where she was completely debilitated by chronic fatigue … during which time she also returned to church.

I can’t prove that, of course, but there are good reasons to suspect it. After the success of her first book in 2004, Clarke endured almost a decade where she was completely debilitated by chronic fatigue syndrome and depression—during which time she came to believe she would never write again. It was also during this time that she returned to church. As she tells the Church Times:

The religion of my childhood in many ways did not suit me. I found it quite problematic … But when I got ill, I was in Cambridge, and I started attending a church there. It was an Anglican church, and quite different from any church I’d been to before … You were allowed to develop at your own pace, and I found this incredibly welcoming. It gave me a space to put my hurt feelings from my childhood aside, and to explore and think, “Well, what do I actually think about all these things?”

Piranesi feels like part of her answer to that question. In his own diary, Piranesi marks the years by significant events. There is the “Year the Albatross came to the South Hall”; the “Year I discovered the Coral Halls”. There is also, we discover, a “Year of Weeping and Wailing”, after which everything changes. It is tempting to read this as a subtle echo of Clarke’s own life story.

Of course, Lewis isn’t the only influence here. Clarke’s style echoes the magical realism of Calvino or Borges. And I suspect I would detect many other echoes if I were better read—it’s that sort of book. And, although there is every reason to stress the Narnia connection, I should note that Piranesi is modern literature—not a children’s story from the mid 20th century. There is a bit of swearing, and a few (fairly oblique) sexual references.

Yet it was the perfect lockdown book for me. I listened to the audio version (read brilliantly by Chiwetel Ejiofor) and then listened to it again over lunchtimes with the rest of the family. It will probably be the last book we read together before my daughter gets married in January.

We loved it. It made us quiet and happy and thoughtful, and it made some of us cry, but I won’t name names.

Image, top, “Dark Prison with a Courtyard for the Torture of Criminals”; original etching with reproductions by Turner (centre) and Girtin (left).