Matthew Barrett’s Simply Trinity is an ambitious attempt to correct evangelical misunderstandings of the Trinity; to explain the doctrine in a clear and engaging way; and stomp on the idea that God the Son might be eternally “obedient” to the Father. Does he succeed? Well, it’s complicated.

Barrett’s core conceit is that evangelicals have failed to understand the doctrine of the Trinity and have replaced it with sub-orthodox notions.

Barrett’s core conceit is that evangelicals of the last few generations have failed to understand the true historic doctrine of the Trinity and have replaced it with sub-orthodox notions drawn from modern conceptions of love, community and sociology. In the “Great Tradition”, he argues, the three Persons are one simple Being distinguished only by their relations of origin (the Father unbegotten, the Son begotten, the Spirit proceeding from the Father and Son). But modern evangelical theology books typically reject those relations (the eternal generation of the Son, for example) and fudge the unity of the divine essence. 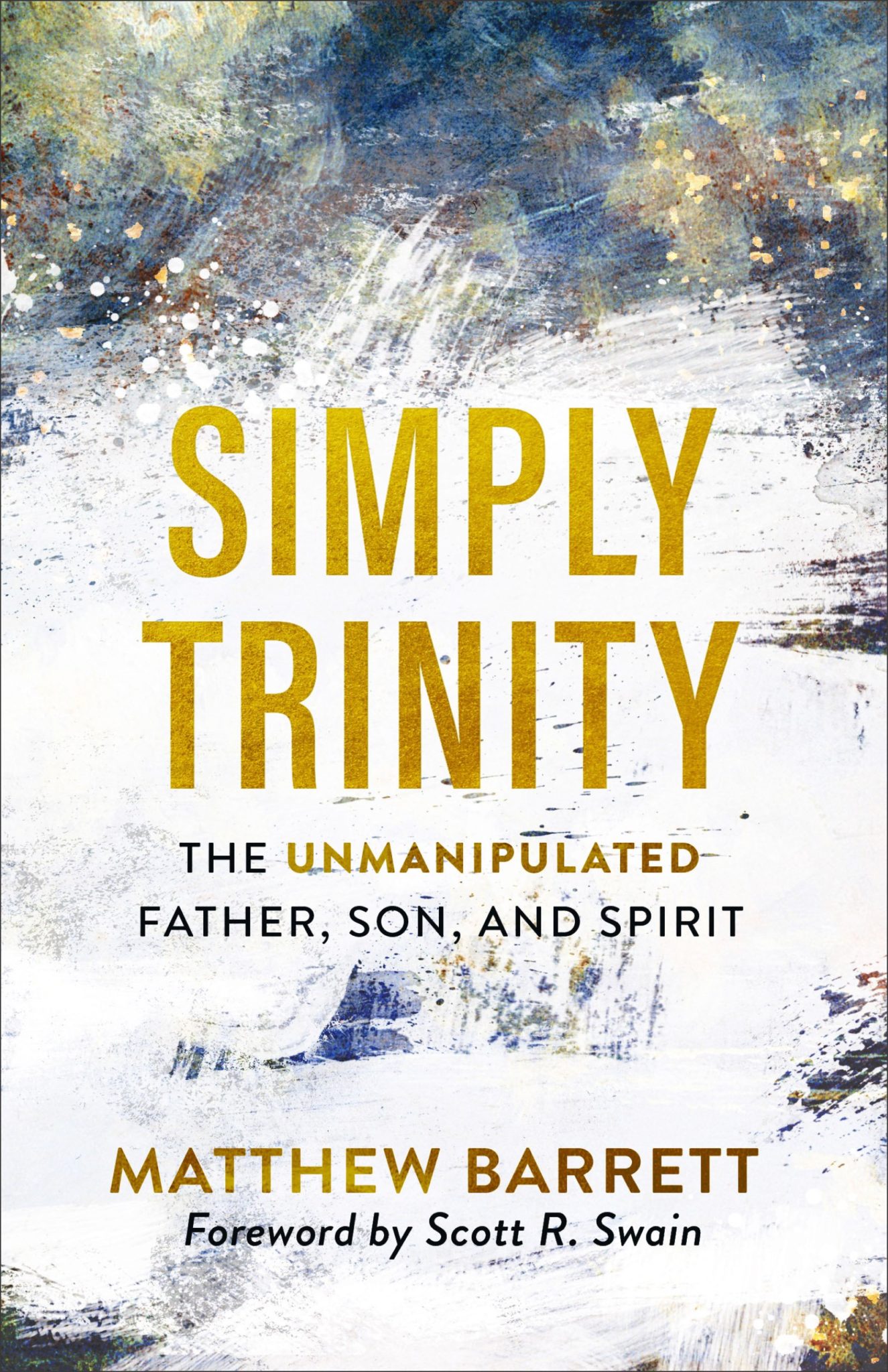 Against the Social Trinity

The result has been social-trinitarianism where the three Persons become separate people (gods really) united by nothing more than love and a common purpose. Progressive Christians conceive of that divine cooperation in egalitarian ways. Conservatives depict it as ordered—the Son and Spirit eternally functionally subordinate (EFS) to the Father.

Barrett sets himself the gardener’s task of pulling out these weeds and replacing them with healthy stock. After tracing the tap-root to the Enlightenment and following its progress through to the twentieth century (Ch 1-3), he begins to reconstruct the Trinity from Scripture and Tradition. Thus, in Chapter 4, he explains the need to distinguish between the way the Trinity is outside creation and the way we encounter Father, Son and Spirit through the missions of Jesus Christ and the Spirit.

In Chapter 5 he commends the idea that God is a single, and absolutely simple being. The divine Persons are not a society of people with three different wills or consciousness but “three modes of subsistence” of the “one simple essence” (146) which is “communicated from the Father to the Son and from the Father and Son to the Spirit.” (148)

Barrett follows this with what was for me, the strongest section in the book where he defends the biblical and orthodox doctrine of eternal generation. He explains what the doctrine is and isn’t and makes careful note of how it was used by the fourth century Fathers. In Chapter 7 he defends the idea from Scripture—first siding with Lee Irons et al. that the Greek word monogenés should still be translated as  “only begotten” (as per the KJV rendition of John 3:16), before going on to point out that the whole of the New Testament continually makes the same point in other words. I especially appreciated his arguments from Hebrews 1 and 2 on this matter.

Barrett does an absolutely masterful job of making many difficult concepts plain in these chapters.

Barrett does an absolutely masterful job of making many difficult concepts plain in these chapters. He helps his readers with boxed sections that provide useful definitions, information about historical context, or address thorny side-questions. He also works very hard to break up the torrent of concepts with well-placed and engaging anecdotes, revealing himself to be a very able writer and communicator as well as a highly subtle theologian.

And yet it is here too that the problems begin to appear. Either to keep things simple, or perhaps for the sake of argument, Barrett works a little too hard to paper-over historical variations in the Great Tradition. In one of his boxed sections (75) he simply waves away a vast academic discussion about the differences between the Greek East and the Latin West.

The cracks appear, nonetheless—particularly when, in Chapter 5, Barrett attempts to refute Gregory of Nyssa’s analogies for the Trinity (139-144). Gregory likens the divine essence to “gold” which appears in distinct objects. Barrett, following Augustine, argues that the analogy doesn’t work because different objects have different amounts of gold, and the sum total of the objects is greater than the parts.

Barrett, following Augustine, has turned the Cappadocian abstract understanding of essence into a concrete thing that can be weighed and counted.

Barrett (strangely) doesn’t reveal the original source of the analogy—which is a shame. If he did, readers would be able to see that he has missed something important. For Gregory “goldness” works as an analogy precisely because it can’t be quantified: a pure gold coin is just as fully “gold” as a gold atom or a gold brick; it doesn’t become more truly gold by increasing in mass. But Barrett, following Augustine, has turned the Cappadocian abstract understanding of essence (e.g. “gold”, “humanity”, “God”) into a concrete thing that can be weighed and counted—the sum total of everything made of gold.

From Nicaea to Hippo

This is significant because it is the nub of the difference between the trinitarian theology of the Nicene generation and that of Augustine and his heirs. For the Nicene Fathers “God” almost always means what it means in the New Testament (c.f. John 8:54; 1Cor 8:6): it means the Father together with his Son/Word and Spirit. Their divinity is that of the “Father who dwells in me” (John 14:10) such that they are inseparably one with him and equal sharers in what he is—i.e. his essence. Barrett describes this very well when he defends the pre-modern doctrine of perichoresis (130).

But in later theology—and especially in the Latin West—“God” often means the divine essence itself; a meta-person who comes forth as the Persons. As patristic scholar John Behr (who appears in Barrett’s bibliography) puts it:

… the word “God” is being used in a new manner by Augustine … the difference [is] between starting from the one God who is Father, and beginning with the Father, Son, and Spirit who are each, and together, the one God.[1]

Barrett (starkly and startlingly!) charges EFS with ‘… stripping the essence of … authority and giving it to the Father.’

Barrett ultimately follows the western line, though he insists that this does not make the essence an additional person: we still have a Trinity, not a quaternary, he says (145). Nevertheless, much that he writes points in the other direction. For example:

True Heir of the West

Let me pause in my criticism at this point, however. The fact that he alternates here is remarkable and reveals Barrett as a true heir of the medieval West. Western medieval trinitarianism at its best always wanted to preserve the Nicene way of speaking alongside the Augustinian. It was only as people tried to resolve the tension between the two ways of speaking that things started to go badly wrong (first suppressing the order and distinction of the Persons and then producing the social-trinitarian backlash).

But Barrett (mostly) follows his heroes, Augustine and Thomas Aquinas. Alongside statements which make the essence “he”, we also read that:

These affirmations delighted me as I read them. They are quintessentially Nicene.

These affirmations delighted me as I read them. They are quintessentially Nicene. They are words that all Christians of every age should affirm.

And yet, by the end I was unsure if Barrett really meant them. Does he really think things begin with the Father, or is the Father simply the first appearance of a logically prior essence. I’m afraid it’s the latter. As he writes:

The takeaway here is that the Father embodies (sic, 83) something more fundamental than himself—i.e. the Father is from the essence before the essence comes from him. We might still say that he elected us before the creation of the world, or chose to bring all things under his Son’s headship (Eph 1:3-10 etc.) but this is just an appropriation—an artificial way of attributing a work of God to one Person.[2] It is the essence himself who really plans our redemption. Saying otherwise means “…stripping the essence of … authority and giving it to the Father …”

The part of the book where Barrett deploys this theology to oppose theories of evangelical functional/relational subordination struck me as the weakest. Apart from the theological issues, his characterisations of his opponents often seem sweeping and straw-mannish.

Who are these no-good EFSers? Does he just mean Wayne Grudem and Bruce Ware before they realised that they were wrong to reject eternal generation?

Who are these no-good EFSers, I wondered as I read these charges? Do they all think alike? Or does he just mean Wayne Grudem and Bruce Ware before they realised that they were wrong to reject eternal generation? Why doesn’t he engage with some of the more sophisticated conversation partners out there such as Fred Sanders and Mike Ovey?

But that would require a much larger book. The feeling by this stage is that he is hurrying things. He has taken on a huge task and is rushing to complete it. I wish he could have slowed down. He says some intriguing things in this chapter that I wanted to hear more about:

Barrett’s arguments are tantalising, plentiful and interesting, but far too cursory to be convincing. I think I will keep believing in a Trinity where the Persons are distinct enough to act toward each other; to honour and love each other—even before the creation of the world (John 17:24).

Barrett has made an important contribution to the retrieval of evangelical trinitarian theology—especially in the first half of the book. Many of the things he says about our weakness in this area are true. Many of his correctives are dead on. Even if you don’t buy his Augustinian the-divine-essence-is-a-person-whom-we-can-refer-to-as-“he”; even if you think that is a philosophical elaboration without any real support in Scripture; even if you think it contradicts the idea that the Father is the source of the Godhead; well, it is still very helpful to see it laid out as plainly as this. And it is very encouraging to have someone of Barrett’s calibre defending Nicene orthodoxy and the western addition at the same time.

[1] John Behr, “Calling upon God as Father: Augustine and the Legacy of Nicaea”, in George E. Demacopolous and AristotlePapanikolaou (eds), Orthodox Readings of Augustine (Crestwood, NY: St Vladimir’s Seminary), p163. It is worth noting that Behr is, in part, responding to arguments by Lewis Ayres and Michel René Barnes that many have too-easily embraced as the final word on the East/West question.

[2] As in, the Father is associated with creation, the Son with redemption and the Spirit with sanctification, even though all three are involved in every work. But Barrett is applying it to the internal works of the godhead here—even the Father’s monarché is just an appropriation.

[3] Interested readers can find an excellent introduction to this in Michael Horton’s The Christian Faith (Grand Rapids: Zondervan, 2011), 129-131.