×
Michael Heiser’s The Unseen Realm is simultaneously a refreshing, odd and timely book.

It is refreshing because Heiser dares to do what so few evangelical scholars dare to do by taking a serious interest in the heavenly council that appears in places like Job 1:6-12; 1Kings 19:19-22; Daniel 10:12-13 and (he would insist) Deuteronomy 32:7-9 and Psalm 82. Where mainstream commentators have often attempted to downplay or explain away the parts of the Bible that speak of the “gods” (or “sons of God”) who function as God’s heavenly deputies, Heiser wants to bring them to the fore. He believes he can discern a heavenly dimension to salvation history that we have missed, and sets out to tell it. 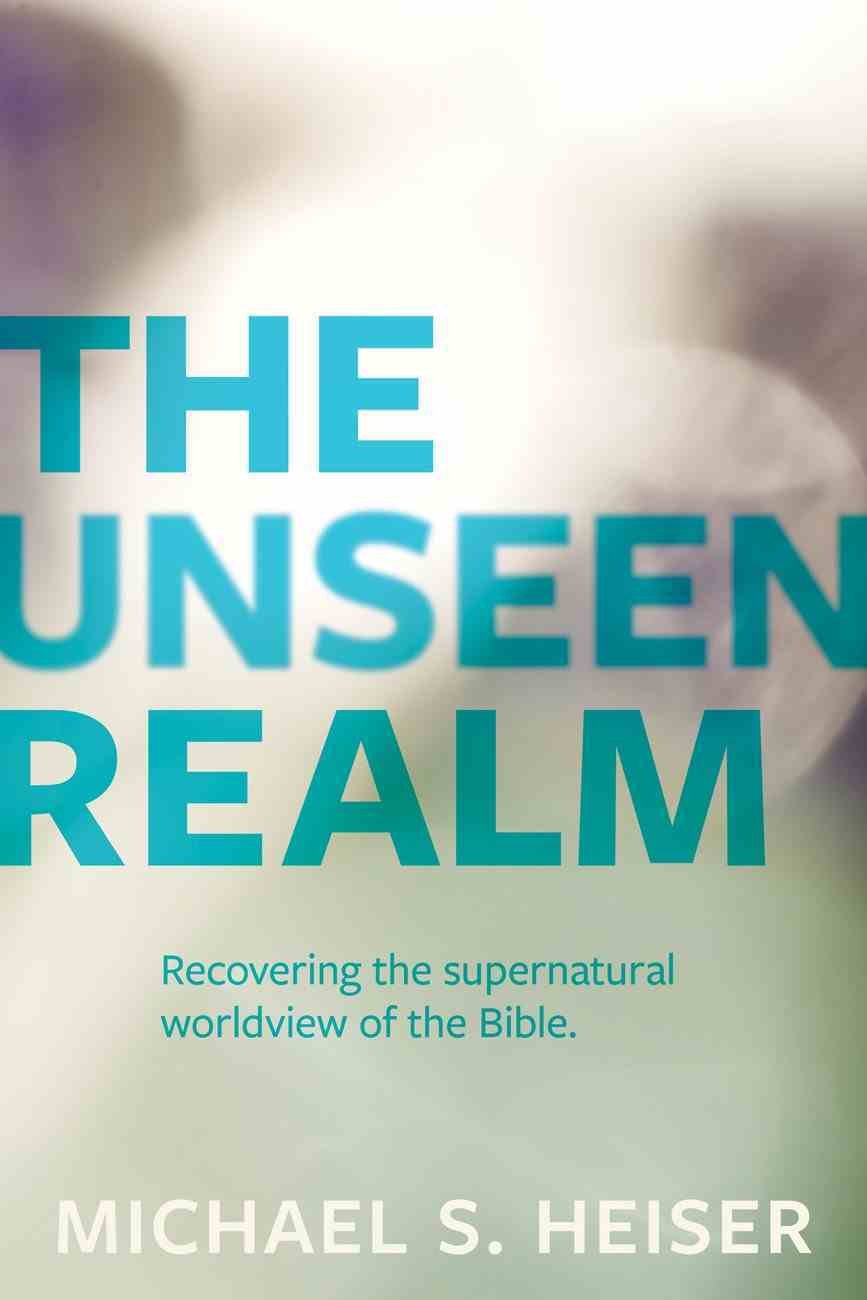 The Unseen Realm: Recovering the Supernatural Worldview of the Bible

The Unseen Realm: Recovering the Supernatural Worldview of the Bible

The details of the story that Heiser tells seek to integrate a whole host of biblical and extra-biblical elements. Drawing on both recent and original scholarship—as well as older (and sometimes contentious) theories—he:

This very brief summary doesn’t do justice to the many fascinating arguments that Heiser marshals along the way. I was intrigued, for example, by the way he connects the seventy missionaries of Luke 10:1 to the seventy nations of Genesis 10; his suggestion that Jesus’ reference to “the gates of hell” (Matt 16:17-18)—coming as it does near Mount Hermon—signifies an allusion to Bashan (and thus the Nephilim). I appreciated his argument that Armageddon refers to Jerusalem; his discussion of the meaning of “sons of God” and the etymology of Nephilim. I was not always sure whether he is correct, but his arguments deserve to be read and considered.

Many other elements are not new but welcome nonetheless. Heiser associates “image of God” with human rule (under God) in a way that should be familiar to readers of this site. He follows the ancient Christian custom of identifying the Angel of the Lord with the eternal Son and (rightly, to my mind) sees this as the beginnings of trinitarian doctrine. (Also on this, I was stimulated by his argument that the Angel of the Lord is the presiding Lord over the heavenly council—which would mean that Christ’s earthly incarnation was preceded by some kind of angelic incarnation/theophany—but I am not sure that would fit with the NT pattern where we see Christ appearing in heaven at the right hand of God; wouldn’t that mean the Son sitting beside himself?)

Nevertheless, while I appreciated many of Heiser’s arguments—and especially his willingness to take the “mythic”[1] parts of Scripture more seriously, I wasn’t always convinced by the arguments that he produces to develop his theme. I thought he put too much stock in the idea that Eden was the location of the heavenly council given the slenderness of direct evidence. Nor was I was sure about his attempt to find a composite human/angel army in places like Daniel 7:27 and Zech 14:5.

There are other oddities too. Heiser declines to identify the serpent of Genesis 3 with Satan or Jesus with the crusher (Gen 3:15)—despite acknowledging the connection in Romans 16:20. Nor is he willing to see the sacrifice of Jesus in Genesis 22 because the New Testament doesn’t make the link explicitly. This reticence, when considered together with some of the things Heiser does feel sure about, seems to indicate a little idiosyncrasy.

More serious problems occur where Heiser sidelines important themes while seeking to tell the neglected or suppressed story of the heavenly reality.

More serious problems occur where Heiser gets the emphasis wrong—sidelining important themes while seeking to tell the neglected or suppressed story of the heavenly reality.

For example, Heiser wants Christians to understand that our glorious future is to participate in God’s heavenly council. But his attempt to find it in the New Testament seems very strained—depending on arguments that:

Heiser speaks of Jesus as “our brother in the council” (p316). But this is to miss the true focus of the New Testament where our hope is, not that we will join the rule of the elohim, but that we will share in the far more exalted reign of Christ himself. As Paul puts it:

[God] raised Christ from the dead and seated him at his right hand in the heavenly realms, far above all rule and authority, power and dominion, and every name that is invoked, not only in the present age but also in the one to come. And God placed all things under his feet and appointed him to be head over everything for the church, which is his body, the fullness of him who fills everything in every way. (Ephesian 1:20-22)

The Meaning of Sacrifice

Another example of imbalance appears with Heiser’s treatment of the OT sacrificial system. This boils down to an investigation of the scapegoat being offered to Azazel (here identified as one of the gods who reigns over the rebel territories). What Heiser writes about this is interesting, and might well be correct, but it is scarcely adequate when Leviticus 16 (and the rest of the Torah!) pay so much more attention to the other sacrifices directed toward God, sin and the tabernacle.

Later chapters repeat the deficiency with the greater sacrifice of the Cross. In another book, Heiser recapitulates the Greek patristic idea that the Cross involved a trick against Satan, but in neither book does he spell out how the death of Jesus frees us from Satan’s accusatory power. A few key verses would have been all he needed (such as Heb 2:14 and 1Cor 15:56 – see more here ).

The problem in both these examples is that Heiser is so keen to accentuate the reality and significance of the heavenly that he underplays (more important) theological (as in dealing directly with God) realities. He rightly reminds us of verses that speak of “gods” but doesn’t lay enough stress on the many verses which insist (when they are compared with Yahweh) there is only one God. He rightly points to the threat we face from hostile spiritual entities, but doesn’t do enough to speak of the far more terrible danger we face if we, as sinners, “fall into the hands of the Living God” (Heb 10:31).

Good theology requires us not only to say true things but to hold different truths in the correct balance.

These deficiencies are a shame, because much of what Heiser is saying needs to be considered. If he is in danger of C.S. Lewis’s second trap with regard to the supernatural realm (i.e. approaching it with “an excessive and unhealthy interest”) then surely many of us western reformed evangelicals flirt with the first danger: paying it no attention whatsoever. When was the last time we:

The late summer of classical and scholastic theology currently occurring in reformed theology compounds the problem. Classical reformed theology focuses on God’s transcendent existence and also considers our limited perceptions of that reality, but it doesn’t generally think enough about the heavenly middle where God accommodates himself; and where we will spend eternity with the embodied Lord Jesus.

The spiritual furniture and and courtiers of this realm must never be the centre of our attention; they are not what we are saved by or for—nor are they even the most serious thing we are saved from (that’s the wrath of God).

The spiritual furniture and and courtiers of this realm must never be the centre of our attention … Yet they are a glorious part of our Father’s cosmos.

Yet they are a glorious part of our Father’s cosmos. The Bible at various points gives us glimpses of baroque spiritual dimensions stocked with exotic beings full of wings and eyes; of principalities and unseen agents. Thinking about them should enrich our appreciation of the One who made them—just as we should be stirred to praise by considering the racial diversity of the church (Rev 7:9) and the variegated wonders of the animal world (Gen 1).

If we completely ignore these realities then we shouldn’t be surprised if we find ourselves in competition with occult and pagan movements (even within the church) that will attempt to supply what is lacking in an unhealthy way.

Heiser’s The Unseen Realm is a stimulating and provocative read. I would hesitate to recommend it to young believers, but those who already have a good grasp of biblical theology should be able to learn from the good and pass-over the not-so-great (read something like According to Plan first).

[1] By which, I don’t mean untrue, but relating to supernatural realms and beings.

[2] Does Heiser believe that the elohim and humanity will form a sort of upper and lower house ruling heaven and earth? I think this is how he reconciles Hebrews 2 with his belief in the enduring significance of the council, though he doesn’t lay it out clearly. Personally, I doubt that NT eschatology preserves that divide; nor does it seem to square with the way Hebrews speaks of our heavenly inheritance (c.f. Hey 11:16; 12:22-23).