The Boy Who Cried Wolf is a cautionary tale warning against the dangers of lying. The Very Hungry Caterpillar is didactic, providing educational instruction in basic numeracy and days of the week. But most kids books are in the vein of Alice in Wonderland—a story without an explicit message.

Alice in Wonderland has been widely heralded as the beginning of the golden age of children’s literature. Since its publication in 1865, moral tales have no longer dominated children’s fiction. Books don’t have to be educational or moralistic to be published—they can be filled with nonsensical rhymes and funny stories and strange plots and made-up words.

But while many books might not claim to be moralistic, they usually have a take-home message. And even when they don’t seem to—as is the case with Alice in Wonderland—they still play significant formative roles in the lives of children.

Books act as windows through which we see and understand the outside world. They present a certain way of perceiving the world—what is normal or strange; right or wrong; wise or foolish. Although we are all influenced by the books we read (or other media we consume), children are especially so given their formative life-stage.

Books act as windows through which we see and understand the outside world … what is normal or strange; right or wrong; wise or foolish

So, when Lewis Carrol in Alice in Wonderland presents most of the adult characters as foolish and irresponsible, it implicitly communicates to the child reader that perhaps adults aren’t so wise after all. Or, consider Roald Dahl’s Charlie & The Chocolate Factory: the poor-but-kind Charlie Bucket is rewarded with ownership of Willy Wonka’s chocolate factory, while the rich but snobbish children are blown up like blueberries or thrown down garbage chutes by a scurry of squirrels. Dahl seems to be suggesting good people are rewarded but bad people get punished.

Granted, one book does not a convert make. Reading Alice in Wonderland or Charlie & The Chocolate Factory will not instantly stop kids from trusting adults or cure them of gluttony (lest they become Augustus Gloop). But if the values and ideas in such books remain unquestioned and repeatedly reinforced, they can be normalised and accepted by children as the way things are and should be.

In the same way that gazing out a window is impeded by flyscreens and smudges and scratches, so too can a child’s view of the world, and their ability to relate to others, be distorted by the silent assumptions and values books present.

Therefore, we need to note and make use of those books which represent the world truthfully—books celebrating courage and sacrifice; affirming wisdom; warning against youthful impetuosity; and so on. We also need Christian books that show our children the world through a cross-shaped window—explicitly conveying Christian values and attitudes so our kids can learn how to live for Jesus.

If the values and ideas in such books remain unquestioned and repeatedly reinforced, they can be normalised and accepted by children as the way things are and should be

That’s why TGC’s partnership with Crossway is so helpful. Aimed at three-to-seven-year-olds, here’s two picture storybooks they’ve produced that are well worth reading:

1. Arlo and the Great Big Cover-Up

During rest time, Arlo draws on his wall. You can tell by the way his face changes he’s ‘pulling an Adam and Eve’: an evil desire; a moment of triumph; a realisation of horror; an attempt to cover-up; feelings of shame; and a moment of hiding.

Arlo and the Great Big Cover-Up is helpful because it’s so relatable. As a toddler my own brother denied drawing a circle on the hallway wall despite being caught red-handed! But even removing crayons and textas from the equation, do we not each follow this same pattern of denial when we disobey God? We try to ignore our disobedience rather than confess it. We pretend it didn’t happen but it only eats at our bones (Ps 32:3). We forget “God knows everything already”, and, “when we try [to hide our sin], it only makes us unhappy.”

Arlo’s mum shows Arlo the same forgiveness Jesus shows us; loving and forgiving him when he confesses his sin. We can remind children of this story when they disobey—disobedience is not a reason to hide from God, but to run to him. It’s a real-life application of Proverbs 28:13: “Whoever conceals his transgressions will not prosper, but he who confesses and forsakes them will obtain mercy.” 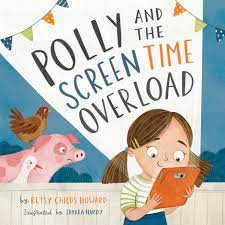 Polly and the Screen Time Overload

Polly and the Screen Time Overload

Staring at her tablet screen, Polly risks missing out on all the family fun happening around her on the farm.

With easy-to-understand language and engaging illustrations, Polly’s story will help families start an ongoing conversation about self- control and how to enjoy technology within boundaries.

2. Polly and the Screen Time Overload

The latest in this TGC series is an equally common challenge children and their parents face.

Every year Polly looks forward to spending a week on her grandparents’ farm. But this year, her aunt gives her a tablet for her birthday and she is completely absorbed. Rather than playing with her cousins, picking blueberries and riding Mustard (the horse not the condiment), Polly downloads games and “watch[es] a cartoon about talking cupcakes”. She’s having fun, which isn’t a bad thing, but readers will start to get the feeling maybe it’s not the best thing.

While Polly’s preoccupied, her cousins are upset, bored, and go home. The farm animals can be seen peering through the windows, saddened to be missing out. We see Polly’s “screen-time overload” not just affecting herself, but impacting on others and her relationships with them.

When Polly’s tablet goes flat it prompts a conversation between her and Gamps. She says,

“It’s not wrong to play on my iTab.” Gamps thought for a minute. “No, it’s not wrong … God has given us many good gifts, but he says we can only truly enjoy them when they don’t take over our lives.

In other words, Gamps teaches Polly (and the child reader) “‘All things are lawful,’ but not all things are helpful.” (1 Cor 10:23) Once more, it is a grown-up who helps guide a child through a challenging situation. So, unlike Alice in Wonderland, one of the implicit values these stories transmit is children can look up to grown-ups and learn from them about God and how to live.

Ultimately, Arlo and the Great Cover-Up and Polly and the Screen Time Overload aren’t meant to be some sort of education lesson for kids to study and take notes from. They are written as stories to be read at bath time and in the early afternoon—stories for children to read and enjoy. Yet, through them, our hope is children might be shaped to view and understand the world rightly—trained up in the way they should go, that they may not depart from it (Prov 22:6).

Jacob York is a young man who has tasted and seen that the LORD is good. He grew up in and loves Drouin Presbyterian Church, is an arts and education student, and serves as President of the Christian Union at his campus, Monash University Clayton. Jacob oversees the Book Reviews Channel.