Please note that this is a (very) secular novel which contains some explicit and potentially upsetting material. It is discussed here, not so much for the purpose of recommendation, but as a useful representative of one important contemporary viewpoint.

With the sudden emergence of a latent ability in women that allows them to generate and deliver shocks like electric eels, women suddenly find that they are able to outclass men in physical contests. As the power spreads, women begin to grow in self-confidence and men start to lose their swagger. Young women discover that they can awaken the power in their elders. Some emerge with devastatingly superior forms of the gift, while others struggle (and are mocked for it). Patriarchal autocracies collapse, sex-slaves are liberated, rapists are punished and new matriarchal religions are born. Alderman’s depiction of the change is at first exhilarating, then disorienting and increasingly dark and disturbing. 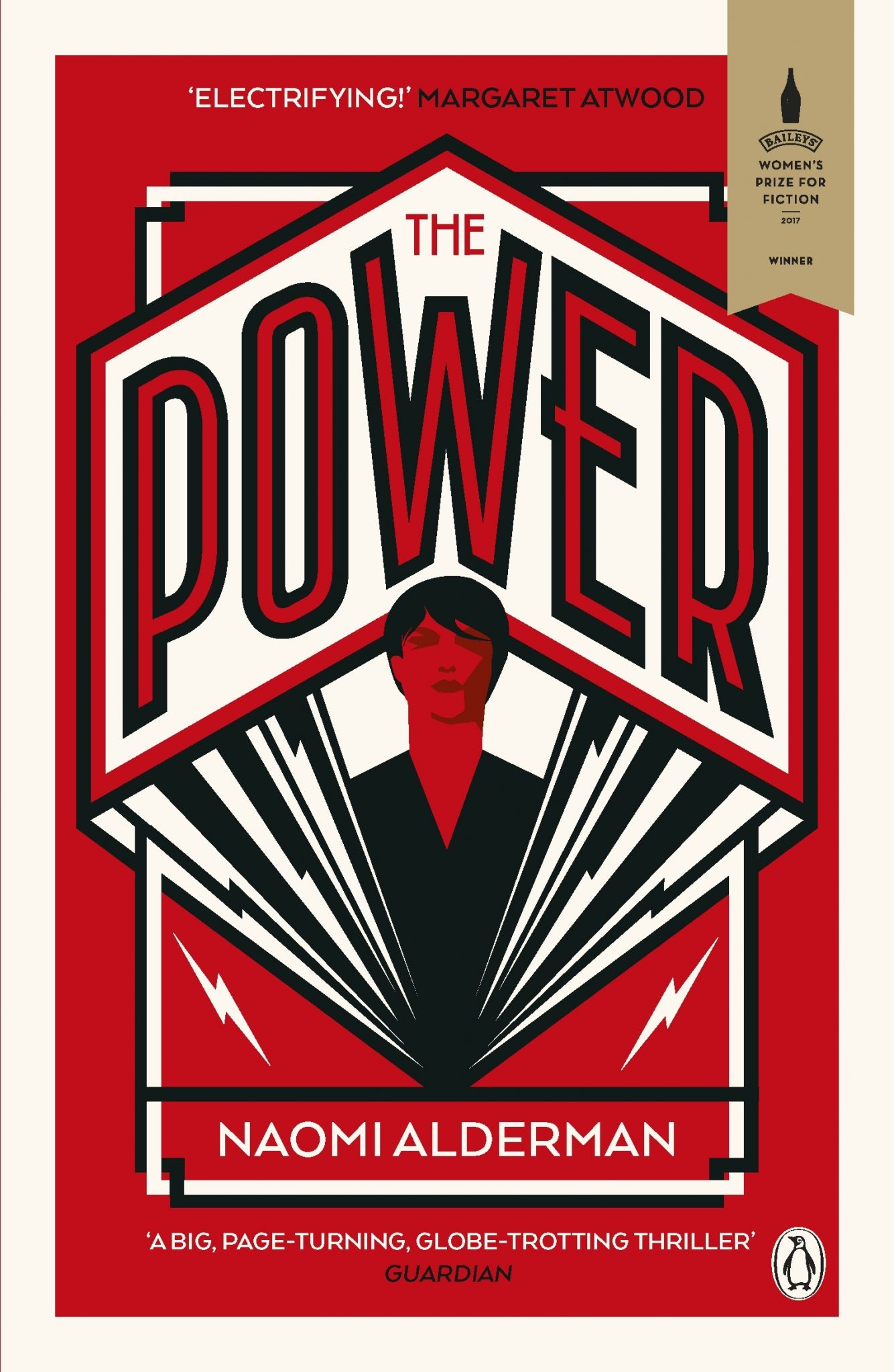 Women suddenly find that they are able to outclass men in physical contests. The change is at first exhilarating, then disorienting and increasingly dark and disturbing.

Alderman traces the beginnings of this revolution through a handful of protagonists: a female politician and her daughter; a sexually abused foster-child with voices in her head; the super-powered daughter of a cockney gangster. The sole male protagonist is a Nigerian journalist who finds professional success, dark secrets and growing dread as he covers the developments for the international media.

That sense of dread is one of the book’s strengths. Alderman refuses to indulge any utopian fantasies about a world run by her sex. Women in The Power don’t perform any better than the men of ours. A few use their power to protect; others go drunk with it. As the world spirals toward apocalyptic chaos, women become vigilantes, casual murderers and pack-rapists (yes, it’s a nasty and very explicit book in parts). The framing “present” of the story (set long after the change) seems to be a sort of inverted 1950s where men are objectified, patronised and go about wrapped in a permanent self-apology, while more enlightened women nod sympathetically from their security and privilege.

The subtext is clear here. Gender is a social construct, and the only significant determinant in that construction is power itself. It’s power that conditions the stereotypes of masculine and feminine behaviour—and, if that power balance were to be reversed, so would the polarity of the sexes: “the shape of power is always the same.”

The subtext is clear here. Gender is a social construct, and the only significant determinant in that construction is power itself.

Now I want to give at least one cheer for this. Alderman’s willingness to believe that everybody is corruptible—restrained from further evil only by lack of opportunity—rings true to honest experience and good theology. Surely she is correct to observe that men and women are equally liable to the corrupting influence of power. Alderman even makes her point by beginning her book with an excerpt from 1Samuel 8, where God warns the Israelites against the institution of kingship.

In this grim take on reality, however, there is neither repentance nor hope. None of Alderman’s characters (male or female) ever face up to the evil they have perpetrated. Moreover, in a world where power is such an irresistible corruptor, there can be no justice either. The power required to enforce justice would immediately make the judge an oppressor. All we are left with is tit-for-tat violence and a looming showdown.[1]

Yet even so, as I read The Power, I also wondered whether Alderman has been pessimistic enough. Can human corruption really be so neatly boiled-down to power relations? Don’t we find that relationships between equals—neighbours and workmates for example—are just as prone to vendettas, petty rivalries, jealousies and schadenfreude as those up and down the pecking-order? Don’t egotism and self-righteous show up most nakedly when we are children—i.e. when we have very little power? Isn’t the main danger with power that it simply gives us more freedom to express ourselves and get away with it?

We humans are always trying to blame evil on some external circumstance—power or lack of education or poverty or a bad political system. But evil is inside us.

We humans are always trying to blame evil on some external circumstance—power or lack of education or poverty or a bad political system. But this is too convenient. Evil is inside us. As Jesus reminds us:

What comes out of a person is what defiles him. For from within, out of the heart of man, come evil thoughts, sexual immorality, theft, murder, adultery, coveting, wickedness, deceit, sensuality, envy, slander, pride, foolishness. All these evil things come from within, and they defile a person.” (Mark 7:20-23)

As we might expect, Alderman sees no hope for religion in all this,[2] making it clear that she views the Judeo-Christian tradition as just another tool of power. And yet, surprisingly, she also hints at something beyond the natural world. The voice that whispers to Allie (the abused foster-child who grows up to start her own cult) knows too much. When a final twist occurs, it seems inescapable that we are dealing with a real spiritual entity.

Why does Alderman introduce this mystical element into her story? Is it simply a device to show that power has a life of its own? Or is it a concession that power alone isn’t sufficient to explain the darkness and evil in human history—that there must be something malign operating on us from the outside?

Of course the Bible would agree with that. Its dire diagnosis of humanity depicts us as both corrupt and diabolically misled. But Scripture also offers hope. We aren’t left to reform ourselves. We have a Saviour who will forgive us and can give us power to change; who can change—and has changed—the course of lives and history for the better.

We aren’t left to reform ourselves. We have a Saviour who will forgive us and can give us power to change; who can change—and has changed—the course of lives and history for the better.

As I was reading The Power, I coincidentally came across this article (and also this discussion) where secular historian Tom Holland reflects on the impact of Christianity on Western culture’s attitude to power and powerlessness. Though he once cherished romantic notions of Greek and Roman civilisation—and regarded these as the source of the Enlightement—Holland now recognises that many of the liberal values that he values most come directly from the gospel of Jesus:

Familiarity with the biblical narrative of the Crucifixion has dulled our sense of just how completely novel a deity Christ was. In the ancient world, it was the role of gods who laid claim to ruling the universe to uphold its order by inflicting punishment—not to suffer it themselves … [yet] most of us who live in post-Christian societies still take for granted that it is nobler to suffer than to inflict suffering. It is why we generally assume that every human life is of equal value. In my morals and ethics, I have learned to accept that I am not Greek or Roman at all, but thoroughly and proudly Christian.

I wonder what Naomi Alderman would make of that. I wish someone would point her to the Centre for Public Christianity’s excellent discussion of “Power and Humility” which opens up both sides of the ledger: how the church has sometimes been shamefully corrupted by power while, at other times, has truly followed the Messiah who “came not to be served but to serve, and to give his life as a ransom for many.” (Mark 10:45)

Power, and the Power of Christ

The Power is disturbing, but well-told tale that can help us (and here I particularly mean us men) to understand what the world looks like to those who feel themselves to be on the wrong side of power. It’s an uncomfortable and confronting experience.

But the stories of the Bible and history also show us other patterns. Within our species’ violent history there have been moments when people gave up their power over slaves; when women and men laboured together as sisters and brothers; when commoners received the vote; when oppressed people were protected and when speech was set free. There have been times when power was power for good—and much more so in those cultures that have known the power of Christ.

[1] Alderman offers one glimmer of hope toward the end of the book in the form of a relationship between a man and woman who have both experienced a loss of power. But it’s hard to see how this might be applied on a broader scale.

[2] I was surprised to learn that she gave up her Jewish faith while writing the book: https://www.theguardian.com/books/2016/oct/28/naomi-alderman-interview-the-power